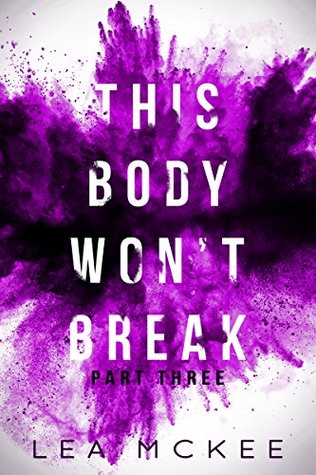 BLURB from Goodreads
There will be passion.
There will be betrayal.
There will be blood. Everything Joanna thought she knew about the New Terra Alliance has been obliterated. Left with a guilty conscious and a thirst for revenge, she has come up with a plan to save those she left behind. A plan so insane it just might work. As Harvest Day approaches, Joanna realizes that to truly defeat the NTA, she must extinguish the source of its corruption–her father. But she has no idea the Commander General lies in wait, hatching a deadly plot of his own.

REVIEW
I had this one on pre-order since finishing part 2, I was really looking forward to reading it! Coincidentally I had just finished a book so could start this one almost straight away.


The cover is the same cover as parts 1 & 2. the only difference being the powder colour on this cover is purple. I am looking forward to seeing what the cover for the complete This Body Won't Break collection will be like.

The genres I have seen listed for this book are Sci-Fi, Dystopian & YA. I totally agree with both the Sci-Fi and Dystopian genres. It may be aimed at the young adult market but as an adult I also thoroughly enjoyed reading part 3 of This Body Won't Break. I would also add that I think the whole virus/disease of TEN would place the book into the post apocalyptic genre too.

So as this is part 3 of This Body Won't Break I had high expectations for it to answer some of my questions. This book literally picks right up where part 2 left off. The preparations for the mission to rescue the other teenagers who are being held at the Mill ready to be taken to be harvested. A separate hideaway is being set up and stocked with necessities such as food, blankets, clothing and medical supplies etc. As it has been decided that it would be too risky to take them all back to the Inn in case they are followed. To Joanna it feels like everyone else has extra jobs they are doing for the mission but the only job she has been given is to keep training with Ace so she can defend herself and also learn how to shoot a gun. Joanna has the very specific job of getting to the PA system so she can tell the teenagers its safe for them to leave the Mill and what will happen if they don't. Joanna has to choose someone to go with her to protect her whilst she speaks to the teens. The choice is between Ace and Ethan, initially she chooses Ace as things are not right between her and Ethan. However all the carefully laid plans have to be changed when it seems that the Inn may be in danger from the NTA and possibly the exiled too. Roman who is in charge of everything to do with the mission originally orders Ethan to stay at the Inn. Ethan is beyond anger, saying he is the only other person other than Joanna that has seen inside the Mill. After much complaining, reasoning and even begging Ethan talks Joanna into allowing him to swap places with Ace. Ethan actually says he is more than willing to take a bullet for Joanna.
There's a touching scene where Joanna's mother Amy is talking to Ethan saying she doesn't know what she would do if anything happened to her daughter, and then she asks Ethan outright if he loves Joanna. Another thing that adds even more pressure to the mission is the fact Commander Tobin Rivers is now staying at the Mill. This makes Joanna even more fired up and emotional, if she gets the chance she plans to shoot him herself, but as yet she has never shot anyone, though she thinks to shoot him would be easy. Once again there's lots of action and shooting etc in this part of the book. The other theme within this book part is that it has been discovered that those who have been injected with the venom have extra abilities. The most common abilities being faster reflexes but other special gifts are better hearing or eyesight. One of the recipients of the venom has turned into what Charles describes as a human battery or charger.

My favourite characters in this part were still Ethan and Joanna, their relationship is still a bit rocky especially when Ethan becomes overly protective of Joanna, suggesting she not go on the mission, that she should remain in the safety of the Inn. Joanna is so stubborn and determined to be part of the mission to try and destroy the Mill. You see another side of Roman, the softer side he has with his two girls in this book. You also see how carefully Amy, Joanna's mother is treading around Joanna. She admits to Ethan she almost feels like she has no right to tell Joanna what her opinion is on anything.

So I really enjoyed this part of the book, its packed with more action and plenty of twists and turns. It was also good to learn my instincts about one of the characters was right too. As it says in the blurb this part of the book, though I would actually say the whole book of This Body Won't Break has passion, betrayal and blood. Some of the questions I had from parts 1 & 2 are still yet to be answered, along with the questions I have from this final part of the whole book. I'm already addicted to this book and series and am seriously looking forward to reading much more of it as soon as its available. Its so difficult to review this part without giving away spoilers. There seriously is soooo much going on in this part. Joanna learns more about her mother and fathers relationship leaving Joanna very bitter and out for revenge on her father, which ends up causing her even more trouble and strife. There are a couple of things revealed very near the end. A major character is shot, one is missing in action, another is a traitor and finally one learns of the new abilities that the venom injection has gifted them. Sorry to be so cryptic but I could go on and on and on about this book. If you love the dystopian/post apocalyptic genres then you should really give reading this book a go, I don't think you will be disappointed!

My immediate thoughts upon finishing part 3 were, Wow! How could you leave the book right there Lea?! I read this in just one sitting. It is a highly addictive series. I am loving this series so far and I had a feeling about that certain character whose name I won't reveal and the scene where he dropped something, I was so suspicious of him!