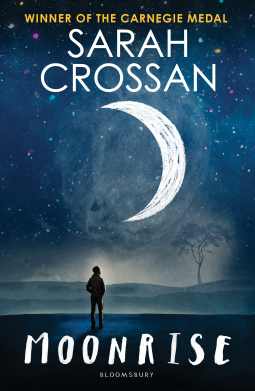 BLURB from Goodreads
'They think I hurt someone. But I didn't. You hear?Coz people are gonna be telling youall kinds of lies.I need you to know the truth.'From one-time winner and two-time Carnegie Medal shortlisted author Sarah Crossan, this poignant, stirring, huge-hearted novel asks big questions. What value do you place on life? What can you forgive? And just how do you say goodbye?

REVIEW
I have previously read a book by Sarah Crossan and loved that, so it was the authors name that initially caught my attention and made me want to learn more about the book. As soon as I read the blurb I decided I had to read the book!


The main colour of the cover is different shades of dark or muted blue, with the addition of a crescent moon so depicting the night time. There is a lone figure standing looking at the moon and stars. When you read the book you learn this is actually a scene described in the book, the lone figure being Joe. You'll know the scene when you get to it. Oh and have those tissues ready. The genre for this book has been classified as Literary,Teens & YA but to be honest I think it would appeal to a wider range of readers to include those who love contemporary and adults would also love this book.

The main character of this book is Joe Moon, who is just 7 years old when the book begins with a flashback. Joe is the only in the house to answer the telephone when it rings so naturally he answers it. The phone call is from his older brother Ed. Immediately Joe begins asking Ed when will he be home to play baseball but Ed has something very serious to tell Joe. Ed has been arrested and it's for something serious, people may start saying awful things about him and he needs Joe to know he didn't do it. As Ed is trying to explain to 7 year old Joe, their mother arrives home so Joe hands over the phone to his mom shouting "The police got Ed". Ed's mom is in a state of shock when she puts the telephone receiver down and tells Joe, the police have Ed and they are charging him with murder! Even with his mum telling him that Ed is in serious trouble, Joe still hopes that Ed will just walk through the door again soon.
Joe's main male figure has been his older brother Ed, he has been the one to make sure he got up in the morning and made it to school with some sandwiches for lunch time. Their mother was, well wasn't coping and had been turning to drink for quite some time. The person, Joe, Angela and Ed and also their mom rely on is Aunt Karen. So later as the book progresses when their mom literally goes out one day and doesn't come back it is Aunt Karen who tries her best to keep what is left of the family together.
Then the book jumps to present day where Joe has moved down to be near to Kirkland Farm where Ed is still on death row but has finally been given his date for execution! Though he is optimistic that there are a few options left before he will be executed. Angela who is Joe's older sister has a job and is saving hard to be able to take a trip to join Joe to see their brother Ed. Angela also has the task of attempting to find a lawyer they can afford to put across Ed's case of his innocence in a last ditch attempt to prevent him being executed.

The book follows Joe and Ed's brotherly relationship, separated when Joe was just 7 years old. Joe is in a strange place, in a grotty rented apartment with very little money to survive on. Joe has what little money he has earned from his job working with his friend Reed at Reed's Uncles garage. So when he is in the diner and hears there may be a job vacancy for a delivery driver, he jumps at the chance. Unfortunately there's a rather big hitch, the delivery driver needs his own transport as the delivery vehicle is broken down. Joe strikes a deal with Sammy the diner owner that if he can fix the car, he gets the job! Simple, right? Well not so simple but Joe is not a quitter and the food he is given whilst attempting to repair the vehicle solves his immediate money problem.

I absolutely adored the relationship between Joe and Ed. Ed has been both brother friend and father to Joe. Ed is also the one who attended all the parents evenings Joe can remember. Even though he has only just left school Joe bravely moves to Kirkland to be near his brother. In fact Ed has to apply for special permission for the under 18 year old Joe to even be allowed to visit him. Joe is in shock when he first visits Ed, he is totally out of his depth and stunned that there is thick glass separating them and that to speak and be heard by each other they have to used a telephone receiver. Joe is absolutely way out of his comfort zone which proves he would do anything he possibly can for his brother. Everything is a steep learning curve for Joe, never having lived alone, not knowing anyone other than the waitresses at the diner and no money for entertainment even if there were things to do in Kirkland. When Joe's older sister Angela rings for up dates, Joe hides how awful the apartment is, how he is "working" for just food. Money is tight for Angela as Aunt Karen has moved out and she is having to pay the full rent, meaning it will take her longer to save money to travel to Kirkland. It is no wonder Joe feels weighed down with responsibility.

As August the 18th draws closer Ed's case is reported on the TV which means people realise who Joe has been visiting. He has to put up with some rather verbal judgemental people in his face. The friends Joe has made rally round him. In fact one of the waitresses Sue tells Joe to just ignore them, as most people who live in Kirkland make a living doing a job that wouldn't exist if it wasn't for Kirkland Farm Prison. The other waitress Nell is younger, nearer Joe's age and does hang around with him, in fact they end up dating. However Joe eventually finds out why Nell is reluctant for her father to meet or even see Joe. It is another blow for an already emotional Joe. The cover depicts a beautiful scene from within the book, and yes it had me emotional, and eyes all bleary with tears. As I said in the Cover description you will need some tissues handy for a few places in this book. Your heart truly aches for Joe and Ed. I haven't really gone into whether Ed is guilty or not guilty or if he is executed as planned on the 18th August in the book as mentioning those would be too spoilery. There's a lot that goes on in the book that I am so limited on revealing as I don't want to give away spoilers. It is never my intention to over reveal,or over discuss in a way that would ruin someone discovering and reading the books themselves.

I really enjoyed reading this book and soon got into the flow of reading from the different perspectives. There's the present where Joe is in Kirkland and the past where Joe is telling us, the reader what has happened before he came to Kirkland. I really loved the use of the letters and telephone call's Ed makes to Joe. The descriptions are great for example when Aunt Karen's voice is described as "as hard as the stone in an apricot". You totally felt the mood of Joe's 11th birthday when he describes his cake, candles and the meal they ate as the cake was only for dessert. They way Joe reports that "dad was gone ten years and Ed was gone for." Joe obviously keeping a tally of the years his father and Ed have been gone.
I also adored the conversation between Angela and Joe, describing living with her Aunt Karen and her rules as being like being in the military. Yet at the same time they are both grateful for the plentiful supply of milk in the fridge as well as the clean clothes in the closets. Though young they both know that Aunt Karen is really only trying to do her best for them. Aunt Karen is the person you call for help, and she normally came through for you and sorted out the mess. I honestly feel I cannot praise this book enough and how much I totally loved reading it. Seriously I cannot recommend this book enough! If you loved Countless by Karen Gregory, This Is Not Forgiveness by Celia Rees, The Possible by Tara Altebrando or any of Lisa Heathfield books then this is a book you do not want to miss.

My immediate thoughts as I finished reading this book, were that Moonrise was a powerful, emotionally packed, amazing book. It has made me want to read more Sarah Crossan books soon.