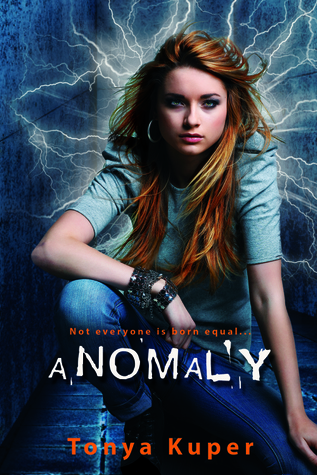 BLURB from Goodreads
Reality is only an illusion.
Except for those who can control it… Worst. Birthday. Ever. My first boyfriend dumped me—happy birthday, Josie!—my dad is who knows where, I have some weird virus that makes me want to hurl, and now my ex is licking another girl’s tonsils. Oh, and I’m officially the same age as my brother was when he died. Yeah, today is about as fun-filled as the swamps of Dagobah. But then weird things start happening…Like I make something materialize just by thinking about it.When hottily-hot badass Reid Wentworth shows up on a motorcycle, everything changes. Like, everything. Who I am. My family. What really happened to my brother. Existence. I am Oculi, and I have the ability to change reality with my thoughts. Now Reid, in all his hotness, is charged with guiding and protecting me as I begin learning how to bend reality. And he’s the only thing standing between me and the secret organization that wants me dead…

REVIEW
I've had this book both from Netgalley and I bought it a while ago when it was available at a special price too! I was looking forward to reading Anomaly and then Entangled Teen generously offered me a copy of bk 2 in the Schrodinger's Consortium Series which is called Enigma.

The cover features a young female on the cover strawberry blonde/red hair and rather piercing green eyes. The female I had guessed and confirmed by reading the book is the main character Josie Harper. Behind Josie the sky looks dark and troubled, does that represent the teens mood? or can she somehow control lightening? Then there's the byline "Not everyone is born equal" The combination of the cover, byline and blurb had me asking those couple of questions and many more, so it certainly did it's job! Will it stand out on a book store shelf?. . .I think it would yes with the hair and those eyes! They really pull you in and make you want to pick up the book and read the blurb.

So a brief or my attempt at a brief description of the book. .  .Well Josie Harper is now the eldest child of Mr & Mrs Harper as their eldest child Nick died about 2 years ago. Since they have always moved around a lot, and Josie and the other Harper children used to be home schooled, Josie doesn't really make friends very easily. At the moment Josie lives with her mother and younger brother Eli. Their father has been working away for longer and longer periods of time. As the book begins Josie isn't having a great time at all, her father isn't going to be home for her birthday, her boyfriend just broke up with her because ''she won't put out'' and a lab assistant job she had managed to get has also strangely fallen through. So she's not having the best day let alone a great birthday!
All that is about to change, in fact Josie has been having "strange things" happening, and they coincide with her having headaches and feeling ill. One such "strange happening" is when two motorbikes pull up at school where Josie and Hannah, the first person she would ever call a best friend are leant on the wall outside school. Josie thinks it would be nice if these bikers were hunks and goes into detail even including the intricate one off tattoo her brother had. When the guys remove their helmets and walk across to the girls they introduce themselves as Reid and Santos. And yep the guys are both just what Josie and Hannah have been dreaming and thinking about! Later in the book Reid and Santos are revealed to be there to help Josie hone her talents as an Occuli. Reid is an Oculi and an Anomaly like Josie, and Santos is an Oculi "pusher". I won't go into detail about the whole Anomaly, Resistance and Consortium, but lets just say Josie may have wished for Reid and a more exciting life and she sure gets one. In fact she has been living a life on the run, which is why they have been constantly moving whilst she grew up. It seems that Schrodingers Consortium want all Anomalies under their control. Reid, Santos, Mr & Mrs Harper, some of their old friends from years ago are part of the resistance. Reid and Santos have arrived to train Josie in the ways of the Oculi which is what they all are.
As Reid and Santos reveal and explain the oculi to Josie we as the reader learn about it too.
In one of the first Oculi lessons Reid tells Josie the three rules. Rule One, cause no harm. Rule Two, never reveal your oculi abilities, and finally Rule Three, Don't play God.
Then Reid and Santos explain the different types of oculi, Pushers who make the possible real. Meaning they can create items but only items that they are familiar with. Retractors retract reality, meaning they can take away anything/item. Then there is an Anomaly who can both push and retract. Oculi come into their powers at around the age of seventeen. In Josie's case she was a pusher initially and then her retracting power began, making her unusual and an Anomaly. The oculi "power" is not a bottomless energy, eventually oculi come to the end of their reserve of "power". Being an Oculi is hereditary, in fact both Josie's mother and father are Oculi. Josie learns about a lot of secrets that have been kept from her until now. Her mother explains about the Consortium and the Resistance.


Being totally honest the pace of this book was initially a bit slow for my taste, then suddenly as certain things were revealed it caught my interest more and I became much more immersed in the book. It did remind me a little of the Seer's Series by Heather Frost and I truly adored that series. I am certainly enjoying this book more now that Josie knows what she is. .This book is well written and from the points of view of the two main characters, Josie Harper and Reid Wentworth. The detailed descriptions of the characters enable you to visualise them and by the latter part of the book you really do have enough insight into the characters to predict how they will react in certain situations. The book has plenty of action with all the pushing and retracting during the training sessions that Reid and Santos have with Josie. There is immediate chemistry between Josie and Reid. However relationships between trainer and trainee are forbidden. Reid also knew Josie's brother Nick and we discover more details about Nick's death within this book via Reid. This book is so in depth and comprehensive about the oculi history, the Resistance and the Consortium. A lot of work has gone into the background of the characters, the associations of the Consortium and the Resistance. There really is a lot to take in, but it makes the book all the more interesting to read.

My favourite characters are Josie and Reid but I also enjoyed learning about the background and relationships within the Harper family as a whole.
So what with great characters, oculi powers of pushing and retracting, then the Anomalies there's loads going on in this book. Then throw in a serum that everyone wants to get hold of and wow! I really enjoyed this book, and will certainly be reading the next book, Enigma as soon as I can! I would also checkout any other books by this author too.
My immediate thoughts when I finished reading Anomaly were, Loved reading this book. What a fantastic start to a potentially addictive brilliant series! When can I read the next one?