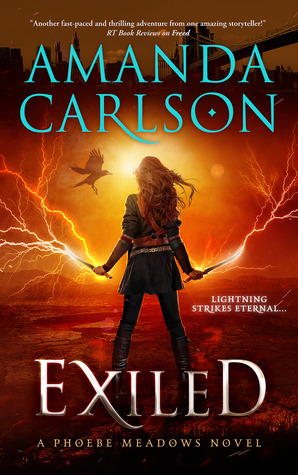 BLURB from Goodreads
Phoebe Meadows is on trial for her life.

After freeing her half-brother, Baldur, Phoebe is set to stand before the Council in Asgard to answer for her actions. The threat of exile if she’s found guilty looms, not to mention the added stress of meeting her real father for the first time.

Upon entering Asgard, Phoebe discovers new allies in a half-brother she’s never met as well as an oracle who is in possession of valuable information. A little added help couldn’t have come at a better time, because when Phoebe is tossed into an unknown realm, she’s only armed with Gundren, a jewel, and her wits.

When Loki shows up, all bets are off. The trickster god throws a wrench in Phoebe’s plans and kidnaps Fen, her only ally. And just when she thinks she sees the light at the end of the tunnel, Phoebe finds she has to defeat one last obstacle: The Norns.

And they aren’t planning to go down without a fight…

REVIEW
As I am approaching reading this book I am looking forward to reading a book that I know from the experience of reading the two prior books in the series, will be action packed. I have so many questions from finishing Freed running around in my head. Such as what will the result and sentencing of Fenrir and Phobe. . .will they be given a fair trial? What will Frigg want as revenge for Phoebe freeing her son Baldur that ultimately led to his death? I also wonder if Odin will try or be able to lessen any charges or there consequences for the daughter he has yet to meet? I've noticed in the blurb another half brother is mentioned, what will he be like. . . Baldur was good and supported Phoebe but not all half brothers will be the same...And one of my big questions is Will Fenrir and Phoebe be exiled together?Or will part of their punishment be that they are separated?

So the cover is dominated by the figure of Phoebe brandishing her power through Gundren, her twin swords. You can see the power bursting forth from Gundren.  The Cover background colour is orange which to me suggest fighting, perhaps in another realm . . like hell maybe, certainly not a wholly great or safe place. Also the small black bird once again features on this cover, is he carrying a message or help from his master Odin to Phoebe?
The by line on the cover is "Lightening strikes Eternal" so I guess the exact meaning of that will be revealed upon reading the book. This book cover fits well with the rest of the series (hmmm *sighs dreamily* look fantastic together on a book shelf) yet has its own colour and elements too. As with the rest of the series, my opinion is this book will shout out from the bookstore shelves.

So we left Freed with Phoebe having to go to Asgard to face court and sentencing as well as facing Frigg who holds her totally responsible for the death of her son, Baldur.
When Fenrir, Phoebe, Tyr, Sam, Leela, Ingrid, Rae and some other Valkyries arrive via Ringhorn the ship that previously belonged to Baldur. (Baldur had left Ringhorn to Tyr.) When the group arrive at Asgard they have to wait to be inspected prior to being allowed into Asgard. There's plenty of posturing between Reggie the head of the guard and his cousin Rae, a Valkyrie accompanying Phoebe. Eventually it is agreed that the Valkyries could march along with Reggie and the Guard taking Phoebe and Fenrir through the streets of Asgard. The crowd is hostile believing what they have been told be the Norns, Verdandi and Skuld who have arrived early for the trial. Most people believe that the word of the Norns is always honest and in the best interest for everyone. Even though the Phoebe, Fenrir and the Valkyrie, etc know that the Norns can, and do lie to benefit themselves. Phoebe is shocked by the appearance of the Asgardian people on the streets. They are certainly not what she expected as the women in particular are dressed in a more old fashioned style, with women in Phoebe also realises that the Asgardians are also more conservative in their ways than she had thought they would be too.
The first compromise Phoebe has to make, is the fact that once at the gates of the jail she has to leave her mother and the majority of her friends behind. Only Tyr is allowed to accompany Phoebe and Fenrir inside. Tyr explains that Fenrir will be taken to a cell to await trial as he has escaped on many occasions and considered unstable. It is hoped that Phoebe will be able to return outside and stay with the rest of her friends and family with Valkyrie Ingrid and her family as Ingrid has organised. Phoebe also has to relinquish her swords/Gundren to Tyr for safe keeping. Tyr promises to make sure they are returned to her prior to her being exiled. Both Phoebe and Fenrir hope that they will be sent to Helheim together but the details of their exile still remain uncertain. Their fate is quite literally in the hands of Frigg. As far as Frigg is concerned it is Phoebe who killed her son. Phoebe and those that stand for her plead her innocence, and swear to the fact that Baldur was killed by Vervandi throwing a mistletoe dart straight through his heart. Frigg will not listen and still blames Phoebe for freeing Baldur from his prison, saying that led to his death.
The task Phoebe and Fenrir are given is to go to Helheim and and convince Hel to allow Baldur to return to Asgard. Odin cannot be seen to favour either Phoebe or Fenrir in any way. He must appear to remain impartial.

One of the scenes I loved most in the book was when Hugin leads Phoebe to the secret, private meeting with her father, Odin. In amongst all the angst and worry of the trial, it is a brilliant scene of their first meeting. As they part Odin does warn his daughter that he will appear a totally different man in the courtroom to prepare her.
As usual things never really go to plan for Phoebe, she had an inkling her trial would not be a particularly fair one as Frigg has already decided upon her guilt. The scene in the courtroom is all set for a fair trial, with people to speak up on her behalf, of course things are going badly so, Phoebe attempts to speak up for herself. Frigg doesn't want to hear the truth she is a grieving mother and wishes to blame the young Valkyrie standing in front of her so it's off to Helheim for Phoebe! When she arrives in Helheim before Fenrir which was the original rough plan she has to adapt quickly and has to go it alone for a while.

We meet Hel for the first time who is daughter of Loki so sister to Fenrir, though you don't really see much family love from any of them. Though Phoebe has a set plan, she has to change it often and let it evolve as the circumstances are continually changing, rather like fate is also constantly changing. Of course we also have more from the Norns in this book too. They certainly seem to have their own agenda and Phoebe is the one thorn in their side! There's lots of trickery, rumours and gossip going on in Asgard, which has Phoebe having to be very careful about who she trusts and gives the Valkyries a difficult job of guarding her too.

A new character I loved was Vali, a quieter character but a very loyal one who has an important task and becomes embroiled in Phoebes mission.
An old favourite character that we've already met is Sam who is once again feisty and fearless when trying to protect her best friend Phoebe. Sam is still loved up with Tyr and he is finding out that she is not a "sweet, mild, quiet" woman who wishes to stay home and have babies. Sam is independent and I think if given the chance would possibly become a Valkyrie like Phoebe! Another plot theme running throughout the book is the fact that Sam seems to be changing whilst being in Asgard, and at the very end of the book we do get a suggestion of both what she may be and what her heritage/parentage is. I'm hoping for more of that in the next book!

I also enjoyed learning more about Asgard and the authors descriptions of Phoebe's surroundings helps you visual them.  Grete's house sounds so . . . . well the words cute, endearing, and charming don't cover it. Asgard sounds idyllic, picturesque, and quaint. I loved the description of the renaissance style clothes the women wear. Only Valkyries wear trousers! Valkyries fight until they retire to find a mate and have children. Though if the future of Valkyries can be influenced and their "rules" changed I think Phoebe could be at the centre of the changes along with her mother Leela and grandmother Grete.

So that's as specific I am going to get for now, as I don't want to spoil your own reading of the book! I will say Mythology is not a genre I would immediately think of reading, and some I have tried I haven't been so keen on but I love this series by Amanda Carlson. There is lots of action, adventure, mishaps and mayhem in this book to be enjoyed! If you love mythology, then this is definitely for you! But even if you are not in love with the mythological genre

My final thoughts as I finished reading the book late the other evening were . . . Wow! another fantastic book about Phoebe Meadows our favourite kick butt Asgardian. Lots of action, lots of plot twists, loved it......when can we have the next one Amanda Carlson? I love Phoebe Meadows & Jessica McClain & I am eagerly waiting to meet Holly Danger too!