The book below was once released under the different title Tri-mates.
The Cascadia Series have been updated and slightly tweaked to be even better!
The main story/plot is the same. 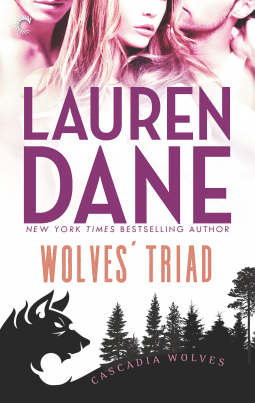 BLURB from Goodreads
The tri-mate bond is a myth
That's what Tracy Warden has believed all her life. Werewolves have one true mate, someone their wolf bonds to physically, mentally, emotionally. She didn't expect to find her mate so soon, but Nick, second to the Pacific pack's Alpha, is undeniably hers. The scent of him, the irrefutable way their bodies call to each other—it's the beginning of a new life for them both.
Until Tracy meets Gabe, and everything she thought she knew is turned upside down.
None of them expected this. It shouldn't be possible. But the bond they share can't be denied—and before long, they don't want to deny it. The triad makes them whole, and two alpha wolves in her bed—in her life—make Tracy wonder how she ever lived without the tri-bond.
But there's tension in Pacific, tension that goes much deeper than mere pack politics. Gabe, Nick and Tracy will do anything to protect each other, and their new bond is about to be put to the test…
Goodreads Link

REVIEW
To say I was eager to get started reading this book is an understatement. I started reading this book on my old tablet which decided to switch itself off every time I attempted to read it. So when I had to then wait until I could replace my tablet to read really get into reading this book which extremely irritating when I was ready for my next Cascadia Wolves fix!
Whilst reading this book I should point out that there are some rather detailed sexual scenes within it, so I would definitely say 18+ only for this one. Personally the explicit scenes were bordering on too much detail for my reading taste but at the same time it didn't make me want to totally want to stop reading, and certainly didn't spoil the plot of the book for me.
The cover is again gorgeous, I'd love to have this set of books on my bookshelf (maybe even a signed copy! . . . hey! I can dream lol).

The cover has the bottom have like the other books in the Cascadia Series, the forest, that surrounds the Wardens home. There's the wolf silhouette at the bottom left corner. The title appears above the forest and wolf silhouette as well as the authors name, both in fonts that match the other books in the series so far. Above the author name is a blonde female, in this case after reading the book we know to be Tracy. She has a figure close to each side of her, and we know the hint from the first line in the blurb "The tri-mate is just a myth".

The genres this book fall's into are paranormal, fantasy, werewolves and as I mentioned earlier I would have to say it is definitely for an adult 18+ audience because of it's content and explicit descriptive scenes. Whilst there are such scenes in the book there is a strong plot and some brilliant characters old and new.

I guess I should begin by explaining what a tri-bond is. . . its when someone has two "perfect mates" and the three actually form a tri-bond. Is that what occurs in this book? Or is the tri-bond just a figment of an overactive imagination?, or an old ancient myth?
Once again bad shifter Warren Pellini rears his ugly head, having created a much stronger, more dangerous werewolf mob. If you get in his way. . .well you don't live very long. this plot runs alongside the romance element in the book.
There's been some fighting between the Cascadia Pack and the Pacific Pack along the borders of their territory, and a mediator has been called in to sort things out in an amicable and mutually agreed way. Both enforcers Lex from Cascadia and Nick from Pacific will meet up with the mediator to discuss the situation and solve the problem. As well as the enforcers other pack members go to help in the disscusions. It is decided that Nina will accompany Lex as they still can hardly bear to be apart. Tracy will also attend in the capacity of personal assistant/note taker. Tracy of course takes Milton with her whenever possible too. On the drive to the hotel that the mediation will take place there's banter between Tracy, Lex and Nina. Tracy laughs at the couple and makes a comment about them still being in the honeymoon phase of their relationship. Lex and Nina laugh, with Nina telling Tracy when she meets "the one", her very own mate, she will not want to be separated from them and will understand.
Cade asks his enforcer Lex, to mention Warren Pellini to the mediator Gabe Murphy who is third in the National Pack. Pellini seems to be attempting to cosy up to the second of the National Pack and its something that has not just the large packs like Cascadia worried, but the smaller ones like Pacific uneasy too. Though there's a connection between the Pacific Pack and Warren Pellini that even their own werewolves would not guess at!
When the small skirmishes are sorted out it leaves two things to be dealt with. The first thing is sorting out Tracy and her mate, anchor and her pledging fealty to what will be her new pack. The second one the fact Gabe Murphy has been contacted by werewolves from the other pack expressing their concerns. Gabe doesn't want to go above his second Jack Myers the enforcer in the National Pack to discuss the problems but events determine he has to.

I felt sorry for poor Tracy who is truly knocked flat by the whirlwind she is caught up in when she meets her mate. Then there's the fact she will be the one to move, leave her house, business and more importantly her family behind to fit in with her mate and his pack.
A minor thing to some but a sticking point for Tracy when her mate is adamant they will live in his apartment and that it is not dog friendly. From the very outset he is fixated in his belief that the apartment is where they should live. Though things go from shaky to being awful and dangerous when the Cascadia pack members, Alpha and eldest brother Cade, enforcer Lex and his mate Nina along with Tracys parents, Henri and Beth and grandmother Lia all arrive at her mates home and their is a very thin veil covering bubbling animosity towards Tracy. To say the air is thick with tension . . . wow you can feel it rippling out of the book at you!
It's grandmother Lia that puts the werewolves right and speaks quietly to Tracy about the truth of the tri-band and the mystical spell that can break a bonding if needed.

I love the banter and affection readily shown between the members of the Cascadia wolves. For example Nina is mate to Lex, and her anchor and pack alpha Cade and is able to be a calming influence of both male wolves. Nina is beginning to be more and more integrated into the pack, both the pack politics and the personal lives and relationships of the other pack members. I also find it really funny that Nina calls Lex "Scooby"!
I adore the feeling of family it comes across really well in how Lauren Dane writes, as well as that strong emotion of pack. Tracy is the youngest in the Warden family so has plenty of older siblings to look out for her. Though Cade and Lex are the ones that display their protectiveness openly, and almost deliver a threat of what the will do if their baby sister is hurt in any way. The fact Nina and Tracy are so close is an amazing thing too, though Tracy had been there for Nina when she most needed it. To say Nina was originally human and was bitten and turned during a challenge that turned out to be more of an attack or attempt to kill her in front of the whole pack she feels very strongly for her werewolf family. Nina does want change within the pack structure, to make things more democratic and she may just have someone else whose thoughts are similar to hers in Gabe Murphy. I think we may see more of Nina and Gabe shaping the future of the packs and their hierachy and ancient, sometimes outdated, and barbaric ways in future books.
My favourite character are still headed by Nina, Lex and Cade and I immediately loved Tracy, how she has the cute, soft and lovable dog Milton that is treat like the spoilt child of the pack. Though the males in the pack probably wouldn't admit it they enjoy having Milton around too. In fact at one point in this book, a guy not liking Milton and not being so willing to adapt to include the beloved dog nearly has his relationship on a possible downward spiral.
Tracy is a real tough cookie to look at, with tattoos and piercings and she can certainly hold her own in a fight. Tracy is not one to walk away quietly if she knows she is right, she is not afraid speaking up and is prepared to fight whoever necessary to prove her point. Tracy truly has one heck of a roller coaster ride of emotions in this book, from the thrill of finding her mate, to the confusion of feeling the same about a second wolf. what happens in the end? You'll have to read the book to find out. In this book we also meet two werewolf children, Haley and Chris, who are caught up in the danger and threat of retaliation from Warren Pellini. It is the fault of the parents of these children that they are now in danger but Tracy doesn't hold grudges and makes phone calls and arrangements for the children along with their mother to be kept safe until the Pellini situation can be fully taken care of.

To sum up I am in love the characters and totally immersed in plot of this series. Wolves' Triad is another great addition to the Cascadia Wolves Series. I would reiterate that this book is 18+ due to descriptive, and explicit sexual scenes in the book. These sections are part of the greater story/plot but at times went a little far for my own usual reading comfort zone. Having said that, it didn't put me off reading the whole book and I am fairly eager to read the next book to discover what will happen to Warren Pellini as well as catching up with the Warden clan.