REVIEW - THE THERAPIST EPISODE ONE - A MIDNIGHT FLING STORY BY J.A. BELFIELD

ABOUT THE THERAPIST SERIES
Chase Walker: Founder of C.W. Consult. Sex therapist extraordinaire. And, without question, always in control.After years of schooling his emotions, Chase takes pride in his self-composure and firm lack of commitment. It takes only one, fresh-faced redhead in need of his services for all of that to fall to pieces. Abigail O'Shay is everything Chase isn't. Sweet. Innocent. A virgin.Chase has never wanted to defile anything more.Except, if that whole therapist-client barrier isn't enough of an issue, Chase's own demons are only too happy to cock-block all the sinful fantasies treatments he has in mind for his latest client.

THE THERAPIST
EPISODE ONE 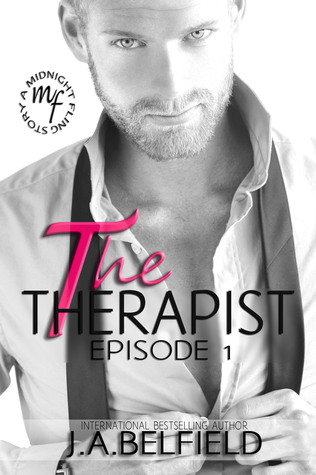 BLURB from Goodreads
Episode One: Through self-imposed rules and a learned composure, Chase Walker takes a married couple on their first steps into bedroom communication. The same stance he takes with every client on his list. That is, until his newest client walks in and gives a whole new meaning to a hard day at the office. With a face full of innocence and a beauty she seems unaware of, Abi O’Shay might just be the first person to crack his professional façade.

REVIEW
So I will readily admit that I wouldn't normally choose this genre of book. Erotica is usually way out of my genre comfort zone. Though this year I made a new years resolution to try to read more books from outside of my usual genre range. I began by reading a dew titles by Lauren Dane, both her Moonstruck Series and her more overtly sexual Cascadia Wolves Series. I have read other titles by J.A. Belfield from her Holloway Pack Series and I proudly declare I am one of her "Hollerers" (her street team). I purchased The Therapist, episode one from Amazon UK.

What can I say about the cover? Well I guess I should comment on the two versions of the cover and some "problem" with Amazon that made it much easier for J.A. Belfield to adjust the title of the book and tweak the cover a little too. So the original cover's main feature was the rather buff body of who I would presume is the "therapist" we meet in the first episode. Well of course the hot body on the cover certainly attracts the eye to the cover and makes you want to see . . .and know more about the guy the body belongs to.
The newer up to date, tweaked cover shows a smartly dressed, perfectly groomed male who seems to hover between smooth and sophisticated yet still has a few gorgeous rough edges around him such as the facial hair. Is the hot guy, buttoning or unbuttoning that shirt? Again I'm guessing the man with those eyes that speak to you from the book cover is the main character, the therapist himself, Chase Walker.

My first thoughts were quite conflicting, was I going to be able to read the whole novella? Was it going to be too overtly explicit for my "reading parameters? As this is a different genre to the other J.A. Belfield titles I have read I am wondering if it will it still have a great plot along with the steamy aspects? I suppose the trepidation I felt about what I would think about this book could maybe compared to a little of what The Therapist's clients feel when going to their appointments with him.

The Therapist business/service called C.W. Consult is headed by a man called Chase Walker, he is an impeccably dressed and groomed in a certain style, and standard he keeps solely for business. It is not just the beautifully cut suits Chase wears, it is right down to the way he styles his hair.
Chase offers his very own brand and style of counselling to male, females and couples who may think they require some help in the sexual relationship areas of the their lives. Chase offers both verbal, and practical sessions, along with giving his clients very specific homework to do between sessions. Though Chase is physically in the same room as his clients he never initiates his part in their practical sessions, all suggestions come directly from the client. Chase is very composed at all times throughout his appointments with his clients. Not that he doesn't have his own urges and thoughts on what he would like to happen in certain situations.
We meet the rest of Chase's staff, the two receptionist/assistants that he met when they were still "tied" to a pimp. Chase paid the pimp well to have the two women with looks I'd describe as chalk and cheese work for him. It's quite clear both women enjoy their work and find their employer attractive.
We meet a couple of Chase's clients. The first are a couple attending their first physical session, who are shown into Chase's office wearing just plain robes and slippers supplied by Chase's company. Chase asks them to choose which room they want to "play in". Chase has a variety of rooms and settings, from luxurious bedrooms and sumptuous bathrooms, one of the rooms is even decorated very similar to his own office and is usually rather popular with all ages! The other client we are introduced to is Abi O'Shay and without revealing any spoilers she may be the one client that could be capable of ruffling the perfectly groomed and tightly restrained Chase Walker.
Also in this novella, the reader is shown a darker side of Chase. We get a glimpse into his "play-room" and the type of role play he enjoys himself.

I think this novella series really has the beginnings of an intriguing plot, with interesting characters that I would really like to learn more about. I'd be curious to know how Chase ended up in this line of work, as well as wanting to learn more about his employee's, and their lives now and before meeting Chase.
Then there was the cliff hanger of what Chase is going to suggest as therapy for Abi O'Shay, and the question of will Chase be able to hold on tight to his well practiced restraint.
Another character the reader only meets briefly that I took an instant liking to, despite her only being a voice on the other end of a phone call, is Chase's mother, she seems lie a down to earth woman. Who knows if how much of her sons job she knows about. I can imagine him to settle down with a young woman like Abi O'Shay and give her some grandchildren to fuss over too!

My final thoughts are that I had gotten a pleasant surprise, that I enjoyed reading most of this novella/episode, despite it's few darker explicit scenes. More explicit than I would normally read, though it worked well as it was a novella/episode. I may even read more when the next episode is available for me to do so. I think I ought to try reading outside of my comfort zone more often especially when the books are written by authors I trust to deliver a great plot alongside the hot steaminess!