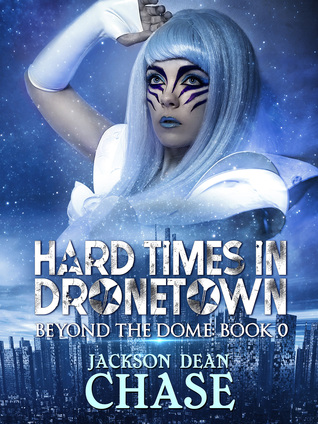 BLURB from Goodreads
Vikka and Rylee are best friends. Now it’s Rylee’s turn to become a factory girl, but even that won’t help her escape her cruel father or the awful life the New World Plutonomy has planned for her. When Rylee runs away to find a way “beyond the Dome” that covers Alpha City, Vikka is desperate to find and save her friend… But is it already too late?

REVIEW
I had been asked if I was interested in reading the first book in the "Beyond The Dome" Series by the author, so I decided to purchase this prequel to see if I would enjoy his writing style and his world building etc prior to reading more in the series.

This title is the second book that I have read before even adding it to Goodreads. It took me a couple of reading sessions to complete but could probably read in just one sitting.
In this prequel novella we get a brief insight into the lives of two young teenage girls as well as the society they live in.

The cover features a city including high rise buildings in the background, though the most prominent thing on the cover is a female dressed in futuristic, sci-fi themed clothing, with a blue wig and some prominent and unusual make up too. The cover has a blue hue to it suggesting its possibly night time. Would the cover make me pick this book up from a book store shelf? I think I'd take a look at it, as I'd say it would stand out from other books.

The genre categories listed for this book as Sci-Fi and (YA) Young Adult, which I do think fit the book book well. Though I certainly am not a teenager I read this prequel novella and found it an interesting read. After reading the novella I would also call it Dystopian, and Futuristic too.

The two main characters of the prequel are two teenaged girls who have totally different home lives. Vikka and Rylee are best friends and live in the New World Plutonomy which exists under a protective dome. Vikka has a fairly good family life, though not without its hardships and sorrows, in that she has been excused from her "factory duty" to stay at home and care for her father. Her entry into the factory has been postponed for now. Rylee will start her duties at the factory very soon, and doesn't really want to join the monotonous life that will become hers. Rylee wants more and intends to take it if she can. She decides to runaway and try to exit the dome in the hope of a different way of life. Sadly for Riley her home life is awful. It's a case of the unknown of what's outside the dome is a better prospect than staying where she is.

Sadly things don't really turn out as easily as Rylee would like and seems to have swapped one life of drudgery for another. It comes to the sad point that even her best friend cannot reach her.

The novella had a great start, then it's pace slowed. I would have liked a chapter or two from Rylee's point of view, covering her attempts at her better life and a reason for where she ended up and why. Then towards the end of the novella where I would have enjoyed a little more detail and a medium pace, it seemed rushed, and perhaps some of the detailing missed. I wanted a little more, when the book abruptly finished.

My final thoughts are I enjoyed the world building and liked the characters of Vikka and Rylee. Maybe this prequel is better read after the first book in the series, in that this novella adds the detail and background you want about Vikka and Rylee. Will I be reading the first book in the series, Drone? Yes I am interested in learning more about this world and those that are running it. as well as the possibility of more about the two characters I met in this prequel.