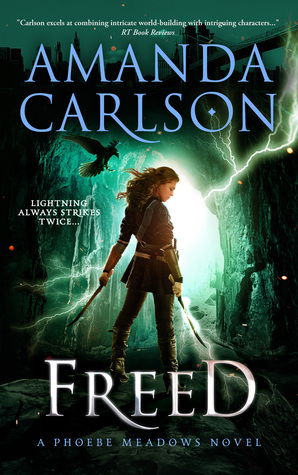 BLURB from Goodreads
Phoebe Meadows has one thing on her mind: Free her mother.

For the last month, Phoebe has been training in the Valkyrie stronghold readying for battle. But when she stumbles into a secluded valley after a day of grueling practice, she’s given a dire prediction. Phoebe must leave the stronghold immediately with the aid of the giant, Junnal, to rescue her mother from the dark elves. If Phoebe fails, Leela will be transported to a place that can no longer be reached.

Leaving Fen behind threatens to undo her, but Phoebe stays true to the mission. Along the way, she allies with the god Baldur and an old white elf mage. Together, they storm the realm, and with the help of an angry wolf and her Valkyrie sisters, they just might stand a chance to free the valiant shieldmaiden.

But Phoebe soon learns that in order to save her mother, she might lose something too precious to sacrifice…

INITIAL THOUGHTS
As I thoroughly enjoyed Struck which is book one in the Phoebe Meadow's series, I freely admit that I do have rather high expectations from Freed. I have read and loved other books by Amanda Carlson. I'm looking forward to catching up with Phoebe and learning how her Valkyrie training is going, as well as catching up with the romantic vibes going on between her and Fen, and her brother Tyr and best friend Sam of course!". Then there is sure to be some more mythology to read and learn about too. Will Phoebe meet either one or both of her birth parents in Freed?

THOUGHTS WHILST READING
24%   "Oh wow can Phoebe really get her mother back with only Junnal to help her?"
55%     "Can Phoebe break out of her cell using Gram then carry out the mission to rescue Leela successfully? Can she also free Junnal, Callan & Baldur too? Will Phoebe be able to change the course of fate the Skuld had foreseen?"
56%     "Can Phoebe trust Willa? Can she escape and manage to rescue her mother Leela as she set out to do?"

COVER COMMENTS
The main colour of this cover is a dark green which I'd say fits well when you read the book and know Phoebe encounters another realm full of dark magic. This cover features Phoebe Meadows who initially seems to be being struck by lightning, though having read book one, I think the lightning is a representation of the pure power she has within her and she does appear to be controlling it too. The large bird is on this cover who we now know is an important character from within the book, called Hugin.
I still love the font and format of the book title, series title and the Authors name appears in a contrasting colour boldly on the cover but once again as on book one's cover, at the same time compliments the cover rather than dominating it. In the background we can see what looks like a doorway, upon reading the book I'd say it is a cillar . .a portal/doorway to another realm. The byline is changed slightly on this cover saying "Lightening always strikes twice".
Would the cover make me pick this one up from a bookstore shelf? As I find the cover both eye-catching and colourful I would certainly pick this one up to learn more.

FINAL THOUGHTS
Brilliant! Looking forward to reading more! Bring on Exiled!!
I want to be totally honest and say I haven't read and loved many books with the Gods and Goddesses in them. I have previously found the mythology parts difficult to remember and even harder to enjoy and understand but the way Amanda Carlson approaches the mythology and explains it as the plot unravels has me thoroughly adoring it and perching right on the edge of my seat as the story unfolds. Amanda has introduced me to a genre I perhaps would have overlooked. I have found myself fascinated with all the mythology.