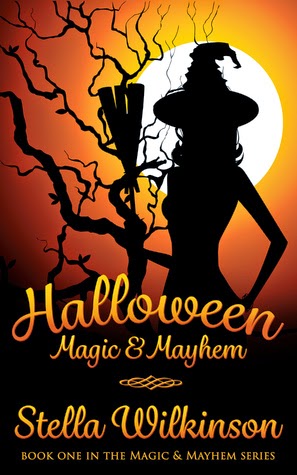 BLURB from Goodreads
How on earth did I end up here? I was supposed to be at a party kissing the boy of my dreams, instead I’m dancing naked on the town common, on Halloween, with a Coven of strange women who might be witches, a bunch of zombies that I have to return to their graves, a talking crow, and my pet ghost thrown in for good measure. Just yesterday I was an ordinary teenager…On her sixteenth birthday Emily Rand discovers that she is a witch. Unable to control her spells she unwittingly raises zombies, and corporealizes the ghost haunting her house. She finds herself in a race against time to put everything right if she has any hope of getting to a certain Halloween party and seeing a certain boy again.Halloween Magic and Mayhem is a novelette of 14,000 words, intended as a bite sized taster. Book Two in the series, Werewolf Magic and Mayhem, sees Emily Rand back for a full length novel.

INITIAL THOUGHTS
Being totally truthful I don't usually "celebrate" Halloween, but when I saw this novella I couldn't resist, I'd found a relatively easy way to join in the "Halloween Fun", I'd read and review the novella! There are two covers listed on Goodreads for this one, I have chosen the brightest more Halloween themed one....... So what am I expecting? A fun simple read that introduces me to a potentially great series to continue reading.

MY REVIEW
I downloaded this one free from Amazon UK with the intention of having a fun read for Halloween. I totally admit I do love most things pagan. I actually have a car sticker with the "Witches Rede" on it. Paganism is really fascinating.
As I said in "Initial Thoughts" there are two covers for this book, One is more serious, mystical looking featuring a female in a cloak under a full moon. The one I have chosen to feature with my review (pictured above) is brighter coloured and is more amusing and enjoyable to look at, especially at this special time of year.
Would the cover make me pick the book up from a book store shelf, yes, it's certainly a bright coloured appealing cover. The silhouette of a female that I's guess is Emily, a newly powered witch, with her broom stick.  It is quite a dramatic effect on the cover, the orange tinted sky, the tree profile and the bright white of the full moon. I really like the cover and the fonts of the book title, series name and authors name too. I also love the little "logo" between the book name and authors name. It just adds to the "old fashioned" "carried down through the ages" feel that features within the book.
So the main female character in this book is Emily, a young girl who's sweet sixteen birthday is on Halloween. Emily lives with her dad, and stepmum, and her step brother Duncan. Emily kind of keeps herself to herself and doesn't really associate much with Duncan. Emily has her best friends Bryony and Kate and they are all super excited to be invited to Tamsin's Halloween Party. Emily is eager for the party as the boy she has a crush on,Sean Carrey, is going to the party and has already asked party organiser Tamsin if Emily will be there. Normally for her birthday, Emily would have dinner with her family but she manages to Coerce her dad into postponing the usual birthday celebration meal until the day after. The only relative on Emily's maternal side of the family is Aunt Iris. Aunt Iris is considered slightly eccentric as she is the owner of a Pagan ritual & supplies store. When Emily visits her aunt, she is told that she is a witch and will receive her powers on her sixteenth birthday. At first Emily believes that her aunt Iris is making a joke, but her mood soon becomes serious when her aunt hands her the wand and grimoire that her mother had left with Iris to pass onto Emily when she was ready to receive her own powers.
There are many different types of witches, kitchen, hedge, etc etc only time will tell what type of witche Emily is and what her powers will be. Aunt Iris advises Emily to be very careful and suggests she attends the coven meeting on Halloween. However that meeting clashes with the party Emily just has to attend.
The morning of Emily's sweet sixteenth, she wakes up and gets a shock when she discovers one of her "witchy gifts" is to be able to see ghosts. So witchy problem number one is, Can Emily help the ghost pass over? Then Emily meets her witches familiar also in a shocking yet comical way.
Further into the tale, Emily begins trying out spells etc, with disastrous results. Emily quickly realises she is somewhat out of her depth  when she has managed to revive the ghost who is now as "real" as she is. Even more potentially ruinous is the fact she has re-animated the buried corpses of the local cemtery! Everything is turning more and more unpleasant and Emily's situation is dire. Help arrives in the form of Aunt Iris, but she alone isn't powerful enough to tidy up the mess that Emily has conjoured. It seems that Emily is destined to miss Tamsin's party and her budding romance with Sean Carrey.
I really enjoyed this book, it may be short but it is packed with action.
Did I enjoy the book? Yes it is well written, and I thoroughly enjoyed reading the book.
Would I recommend the book? I would especially as a fun Hallowwen read.
Would I want to read more in this series? Yes!
Would I want to read other books by Stella Wilkinson? Yes, I will definitely be checking out other books by this author.
Posted by Jeanz xx at 16:00