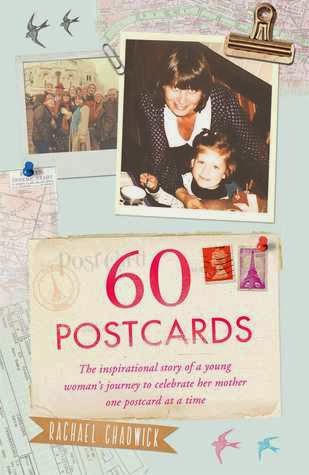 BLURB from Netgalley
The heartfelt and uplifting story of how a project to scatter 60 Postcards in memory of her mother helped a young girl come to terms with her loss.
On 11 February 2012 Rachael Chadwick lost her Mother to cancer, just sixteen days after first being diagnosed, and her world shattered right in front of her. Utterly fed up of the milestones and reminders, in December of that year she decided she would do something different and created a project based around her Mum's approaching 60th Birthday. Desperate to spread the word about the wonderful person she had lost, Rachael had the brainwave of leaving notes around a city in her memory. Deciding she would take it a step further she wondered what would happen if she could ask people to respond to her? Full of hope and energy she hand-wrote sixty postcards, each with her email address at the bottom asking the finder to get in touch. But one question remained, where should she go?
Knowing how much she longed to visit Paris, the last gift that Rachael's mum had given her was Eurostar vouchers, and so it seemed fitting that this would be her chosen city. So off she went with a group of friends to celebrate, discover, and to scatter her memories. Filling their time in Paris with sight-seeing, food and drink, laughter, and of course postcards.
When Rachael returned to her London home, she desperately tried to switch off, switch off from the wondering (and hoping) whether she might actually hear from a postcard finder. And then, they started flowing in…

INITIAL THOUGHTS
I have to admit that approaching this one I was in a bit of a reading block, so I wasn't totally convinced I would enjoy it. I thought from reading the blurb that the book would be kind of like marmite with whole love it or hate it vibe. I thought it would either be really depressing or uplifting.

MY REVIEW
I saw this book on Netgalley and felt compelled to request it. I was lucky enough to be accepted for a copy in exchange for my honest review. As I said in my initial thoughts I had been in a reading slump so fancied reading something a little "different". I felt that I would either love or hate it. I mean the book is about the death of Rachael's (the writer's)mother . . . would it be depressing? Would I want to read the whole book?
So what is the book about? Basically, Rachael Chadwick's mum find's out she has cancer. The cancer she has is inoperable and is in the stages where nothing can be done to either attempt to cure or prolong her life. So the book deal's with this incredibly difficult subject, sadly a subject many of us will somehow relate to on many, many levels. Rachael goes on to tell us the reader how her family cope will her dearly loved mother's last days. Rachael's mother isn't a famous actress, or singer or celebrity of any sort, she is a normal everyday person like you or me. She is a mother, a wife, a teacher, and a friend. The story of her illness and death is a sad one that is being played out in many homes around the world. From diagnosis to passing it consists of only sixteen days.
The book then goes on to tell how Rachael comes up with her 60 Postcards Project. Rachael is dealing with all first anniversaries of her mother's passing when she comes up with the idea of 60 Postcards. Rachael wants to share her love for her mother and their story with other people around the world. So she writes 60 postcards about her mother and puts her email address on the cards. . . what will people do when they find them? Will they reply?
Rachael decides to use the Euro Star vouchers that were the last birthday present her mother bough her and leave the 60 Postcards all around Paris.
The book tells all about the act of leaving the cards and the trip to leave them as well as the replies from those who find the postcards.
So what did I think to he book? I think the book was well written, written straight from the heart of a loving daughter. I think the idea of the 60 Postcards to celebrate and commemorate what would have been Rachael's mum's 60th Birthday was a fantastic way of remembering a much loved and dearly missed mother.
I found the book heart-warming, yet heart breaking. Whilst reading it I smiled, but at other times reading the book I had eyes that were brimming with tears and a heart that ached for Rachael and her mother and the family. Within the first two sentences that are used to describe the book  the words heartfelt and uplifting are used and this book really is inspiring, heartening, moving and elevating. I cannot sing it's praises enough.
So did I enjoy the book? I think from my review you will have gathered that I found the book and enriching and  emotional  read.   Would I recommend the book?  Yes I would recommend this book.
I also feel like I want to Thank Rachael for sharing her story and her love for her mother.