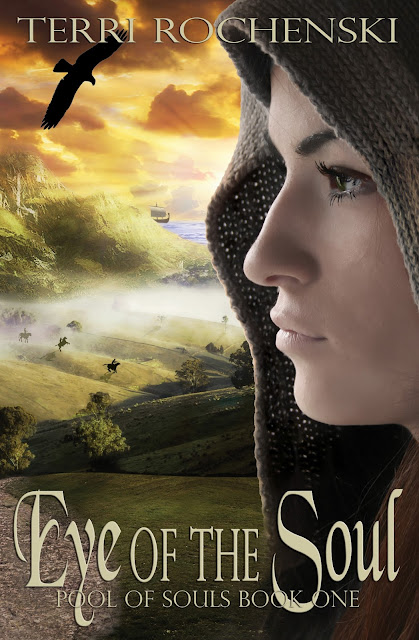 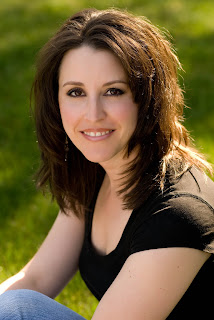 Terri started writing stories in the 8th grade, when a little gnome whispered in her brain. Gundi’s Great Adventure never hit the best seller list, but it started a long love affair with the fantasy genre.

Today she enjoys an escape to Middle Earth during the rare ‘me’ moments her two young daughters allow. When not potty training or kissing boo-boos, she can be found on her back patio in the boondocks of New Hampshire, book or pencil in hand.

What is your name, where were you born and where do you live now?
Terri Rochenski and I was born in Sunbury, PA. I relocated to New England a few years back, and I couldn’t be happier. LOVE the cooler weather!!

Who is your publisher? or do you self publish?
The Pool of Souls series is contracted with J. Taylor Publishing, who also accepted my short story, Sacrificial Oath, for their Make Believe anthology. I also have a new short historical romance standalone titled Alone No More releasing in December with The Wild Rose Press.
(I read Sacrificial Oath and really enjoyed it, here's a link to my review as you'll see I loved it!)

How long does it usually take you to write a book, from the original idea to finishing writing it?
Each story is different for me. Some flow quickly, others not so much. The Pool of Souls series has been in the works for over three years, and I’m STILL laboring over book #2, Secret of the Souls which releases in Oct. of next year.

What can we expect from you in the future?  ie More books of the same genre? Books of a different genre?
When it comes to novels, I tend to stick with fantasy. My short stories have a tendency to fall into the historical romance category. These are my escape / break from novel writing.

Do you gift books to readers to do reviews?
I’ll do so with my short stories, but with JTP, they have a reviewer’s program designed specifically for those interested in their books. If any of you are interested head over HERE to check it out.
(I don't want to sound gushy or anything but I've loved all the J Taylor Publishing Authors I have been in contact with. J Taylor have a truly brilliant selection of books.)

Do you read all the reviews of your book/books?
So far, yes, and I probably will.  Jeanz,  How can I NOT?

Do you choose a title first, or write the book then choose the title?
Each story is different. Some have come first, others I’ve drawn a blank on until completion.

Do you think children at schools these days are encouraged enough to read? and/or do Imaginative writing?
My oldest daughter just started kindergarten, so from personal experience I have no say. If I had to GUESS I’d say no. With computers, ipads, Xboxes & all that jazz, I think kids aren’t encouraged to use their own imagination as much as when I was a child.

Did you read a lot at school and write lots of stories or is being a writer something newer in your life?
I’ve been reading like a fiend since I could sound out words. The love of writing began in 8th grade and really hasn’t ceased since then.

Did you have a favourite author as a child?


My grandmother bought me Laura Ingles Wilder’s series when I was seven. I wore them out, no lie!! I also thought I should have been born in her era. After that series came the Narnia series which I also read countless times. It was this series that started my love affair with the fantasy genre. 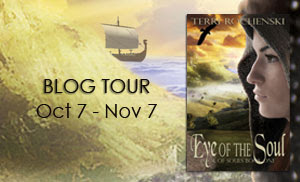 Cursing her arthritic fingers, Miri squeezed out a rag and draped it over the human man’s hot forehead.
“I’ve seen a lot more harvests than you, old goat,” she muttered, lifting his eyelids. “I’m thinking you’ll never catch up either. Doubt you last another half-moon’s phase.”
Miri pushed to her feet and stretched her hunched back. A heavy sigh slipped past her wrinkled lips as she glanced around the sick house. Keeping the night watch wasn’t too bad—she’d volunteered often since her old bones wouldn’t allow much sleep.
“Joints wasted, hearing all but gone …” Miri yanked on the long white braid lying over her shoulder. “I’m the old goat.”
She shuffled down the aisle, woolen kirtle swishing in the silence. A cool, autumn breeze rustled the crimson leaves of the magnolia and palm fronds overhead, drawing her gaze upward. Violet streaks lit the pre-dawn sky.A dog barked, yipped, and fell silent.
Miri peered across the village green to the thatched buildings beyond. A shadow passed between two cottages. Another three hurried toward the neighboring dwelling.
“Sight fading or my mind, too?” Miri rubbed her watery eyes, blinked, and leaned forward. Light flickered through the palm trees behind the outlying homes.
Torches?
The flames drew closer, weaving between the trunks.
Humans from the mainland? Miri’s hand clutched at her throat. Soldiers. Fadir have mercy.
The men crept through the village, taking up positions at every doorway. Two brutes, more horse-like in size than human, approached the sick house.
Sputtering torch held high, the first strode forward, dark eyes intent upon Miri. A green surcoat covered broad shoulders and fell to his thighs. The golden wheat sheaf of the city of Varosh adorned his chest.
Cold sweat beaded upon Miri’s brow. Breath burst from her lungs, and she moved back, clutching the door jam.
The second soldier stepped closer, chains and shackles clanking in his hand. He stopped two paces away from Miri, and a smile stretched his stubbled cheeks, revealing rotted teeth. “Good morning pointy-ears.”
Miri stared, heartbeat thundering in her ears. She’d been called worse in her eighty-three birth passings but never with such malice.
A single cry rang out across the village, and doors crashed inward. Screams rent the air.
“Don’t fight Native woman,” rotten-teeth sneered, shackles outstretched.
“W-why?” Miri whispered, taking a step backward.
A scowl narrowed his gaze, and his fist shot forward.
Bursts of light and pain exploded through Miri as she crumpled to the floor.
#
Miri’s people huddled on the village green as fall’s pale sun crested the trees. Cold metal had been clasped around their necks and ankles. Many trembled in the cool air, little more than night clothes covering their nakedness. Miri held to her braid with a white-knuckled grip, her head and its egg-sized bump throbbing in time with her pulse.

A handful of other battered Natives who had attempted flight were the last to join them, the soldiers tossing them forward like sacks of potatoes.