REVIEW - YOU'LL FORGET THIS EVER HAPPENED BY LAURA L ENGEL 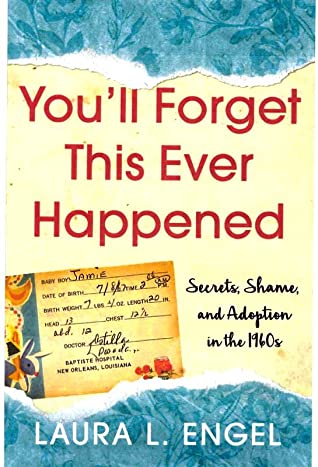 BLURB from Goodreads
Told with heart and grit, honesty and wisdom, You'll Forget This Ever Happened is the poignant story not only of Laura Engel, but of thousands of young women in the 1960s who were made to relinquish their newborns simply because there was no ring on their finger. Family secrets and the lifelong damage those secrets caused carries us along unexpected paths in this triumphant story of redemption and forgiveness.

REVIEW
I would say it’s normally the book cover that attracts my attention first but it was the title of “You’ll forget this ever happened” that immediately tugged at my heart. I then looked closer at the book cover which has a baby cot card as its centre. Then my attention was drawn to the byline, “Secrets, Shame and Adoption in the 1960’s”.

This book is about and written by Laura Engel at 17 years old and is the eldest and only daughter of Billy and Ann. Laura has two younger brothers, Tommy and Michael whom she cares for regularly. Laura’s grandmother lives nearby and Laura visits her every day. Ann, Laura’s mum is a bit strange in that she will suddenly take herself off to bed and refuse to interact with her family. It’s lucky for Ann & Billy’s children that their grandmother is nearby enough to help out, though Ann hates this fact. Laura has been seeing/dating Clay for a while, and in an effort to keep him from dumping her she sleeps with him. However, when she realises she is pregnant, Clay wants nothing to do with the baby or her anymore. In fact, he actually accuses her of sleeping with someone else, trying to say the baby is not his. Laura does kind of go into denial and tries to hide the fact she is pregnant. This hiding the pregnancy doesn’t last long and she soon finds herself grounded and told to make sure she isn’t seen. Billy contacts Clay who insists he will not marry Laura despite pressure from Billy. As Clay has enlisted in the army, Billy even attempts to get the army to put pressure on him to coerce him in to marrying Laura. It soon becomes apparent that Clay, his family and the army are more than happy to ignore the fact Laura is pregnant with Clay’s baby. The “problem” and possible solutions are left to Laura and her family. Laura thinks of all sorts of scenarios, maybe she could have her baby, then her mum could bring up the baby. Laura knows her mum loves babies and remembers her as always happy when her brothers were babies. So Laura is shocked when her parents take her out on a drive to a place the church has suggested to her grandmother for unwed mothers. The home is in a rather rough part of New Orleans, so much so when the car pulls up, Ann refuses to get out of the car and it is Billy that takes Laura up to the door and inside. They are taken inside by Miss Felton who immediately starts reciting the information about the home for unwed mothers. Though Miss Felton refers to the home as an “institute of mercy” and goes on saying it is also a child rearing institution, and an adoption agency. Miss Felton sings the praises of the home saying the staff are Christian, and there are more than 20 Doctors and interns that provide their services as well as a graduate nurse on duty all the time. Miss Felton also heavily emphasises having an excellent success rate rehabilitating the girls. Laura zones out, she has come to the conclusion she is going to be stuck here until the baby is born anyway. Miss Felton turns her attention to Laura telling her she is doing such a good thing, giving her child a chance of a better life in a good home and parents. It’s then Laura realises she isn’t just at this place to hide whilst she has her baby, and then return home with her baby. Laura is initially stunned that everyone expects her to give away her baby and plans on changing their minds.

Laura enjoys working in the nursery at night with the nurse employed by the home. Laura makes friends with some of the girls and avoids the ones she doesn’t care to associate with.

Laura slips into a routine, just as the other girls do. Sadly, when the time comes Laura has to sign her baby away and she is expected to return home with the cover story of staying with her other grandmother for a while. The baby is not to be mentioned. Laura does manage to sneak back inside the home and the nursery to see her baby one last time and its during this visit that she steals the name label from the cot of her treasured son. This card is the thing she looks at every birthday, Christmas, family event. It’s her one link to her first child. Despite other relationships she never ever forgets her son.

I don’t want to go into anymore detail about the book as I want you all to buy it, or borrow it from the library and read it for yourselves. The book is written as if Laura is sat telling you her story, how events unfolded, her relationship with her parents, before, during and after the birth of her son, their first grandchild. I really liked the description of her “mama whose only nod to makeup Revlon’s bright red Queen of Diamonds lipstick” and the other description referencing Laura imagining her baby as her “tiny tears doll.” In this book you feel like you are on the journey with Laura, experiencing her confusion, disbelief, shock and horror of her boyfriend refusing to marry her, being sent to an unwed mother’s home and having to sign her baby away. Then her sadness, depression and constant pining for her missing child. We also learn about events from the perspective of her son, and that of his adoptive parents. The book is a huge wave of ever-changing emotions and you really do feel like reaching into the book to hug Laura. How times have changed, now young women get to keep their babies and have support to bring them up. In Laura’s era she really didn’t have a choice, or she would have done what one of the other girls in the home did and keep her baby. This other girl had a boyfriend who wanted her and her baby though. Unfortunately, Laura does not have that support. Even when she returns home, life doesn’t really improve for her. Nor does it improve with her marriage, and the children she goes on to have. She loves her children but none of them can replace that place in her heart for her first-born son.

This book certainly makes you wonder how many others are living with this type of heartbreak. I have read other books on the subject, particularly ones where the young mothers are horrifically mistreated. Though I guess you could say, Laura didn’t go through the harshest treatment, she still had her rights removed and was told what she had to do rather than there being support for her to do what she really wanted to do which was to raise her son.

Summing up, this is a heart-breaking but amazing true story of a resilient brave woman!