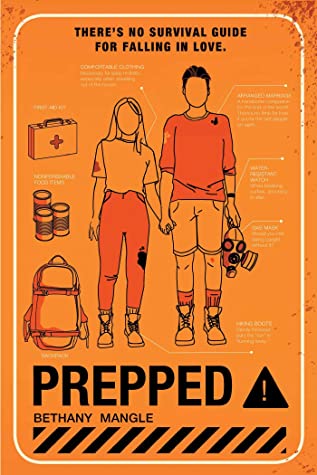 Title: Prepped
Author: Bethany Mangle
Publisher: Margaret K. McElderry Books (Simon & Schuster)
Genre: Teens & YA
Release Date: 23 February 2021
BLURB from Goodreads
Always be ready for the worst day of your life.This is the mantra that Becca Aldaine has grown up with. Her family is part of a community of doomsday preppers, a neighborhood that prioritizes survivalist training over class trips or senior prom. They’re even arranging Becca’s marriage with Roy Kang, the only eligible boy in their community. Roy is a nice guy, but he’s so enthusiastic about prepping that Becca doesn’t have the heart to tell him she’s planning to leave as soon as she can earn a full ride to a college far, far away.Then a devastating accident rocks Becca’s family and pushes the entire community, including Becca’s usually cynical little sister, deeper into the doomsday ideology. With her getaway plans thrown into jeopardy, the only person Becca can turn to is Roy, who reveals that he’s not nearly as clueless as he’s been pretending to be.When Roy proposes they run away together, Becca will have to risk everything—including her heart—for a chance to hope for the best instead of planning for the worst.
Goodreads Link
PURCHASE LINKS
Amazon US
Amazon UK
REVIEW
The cover of this book is what initially caught my eye. It looks like the cover of an old instruction training manual. The bright orange colour will certainly make it stand out on a book store shelf.

This book is about preppers, but not in an actual catastrophic situation. This is a group of people who believe the end is coming and they are preparing for any and every eventuality. Their motto is "Always be ready for the worst day of your life". The leader of the prepping community that all live in the same small neighbourhood is George Aldaine. The group is a mixture of families and adults. The adults concoct all different disaster scenarios, they then set them up and practice dealing and overcoming these situations. It is during one of these set up problems that we are introduced to the main character Becca, who is the eldest daughter of George Aldaine. Katie or Katie Cat as Becca calls her younger sister is just ten years old. Karen Aldaine is their mother and works as a nurse, so she brings her knowledge for the first aid parts of the prepping activities.

The book is centred around Becca Aldaine and Roy Kang, the boy her parents have chosen to be her future husband. They have chosen Roy as the choice is rather limited within their community, or “cult” as outsiders see it. Becca is viewed as odd because she doesn’t have the freedoms or thing the other kids at school have. In her own community she is considered odd for going to normal school, as some of the prepping community insist on home schooling their children. A match between Roy and Becca will also keep a good, diverse genetic pool. Becca and Roy have very little to do with decision, though Roy seems keen on Becca. Becca just accepts this marriage will happen, though wonders which Bunker they will live in once married. These preppers are so prepared they have a set of bunkers for their communities.
Some of the preppers are more hardcore than others. Becca and Roy are the youngest children to be allowed to take part in the act out disaster scenarios. Some of the other families want the age to be lowered to allow their younger children to take part.

Becca is a good, hard working student at school and one of her teachers helps her fill in a form to apply for a scholarship. The only thing worrying Becca is who will protect her sister Katie from the harsher prepper practices. Becca thinks she alone in her need to leave this life behind, but Roy confesses he is tired of all the trials and drills they have to take part in. Becca and Roy work out a plan and though she doesn’t want to leave Katie behind, she knows she cannot legally take her with them, so she sets about making a plan to bring the unusual practices and lifestyle of the preppers to the attention of social service. Becca even lines someone up who will step in to care for her sister Katie until she is old enough to make up her own mind about what to do in life.

My favourite character was Becca, she goes along with the scenarios her parents set up for her to be part of despite many of them being very dangerous and making her feel pain as well as embarrassment. Becca has been forced to be grown up so soon, she takes care of her sister and basically does the majority of the chores and house running whilst her mum goes to work, then comes home and slumps into bed. I adored how caring Becca was, so protective of her younger sister, sheltering her from the harsh realities of the prepping community. Even when she has an escape plan in place for herself, she still holds back until she has something in place for her sister.

The characters that irritated me a lot were George and Karen Aldaine, they seem oblivious to their eldest daughters, discomfort and at times even her existence. They had no qualms at piling more household duties on her, not allowing her to do her homework. There is one incident where Becca has to spend the night in her family bunker. It’s not a one off, occurrence either as she has a system in place for her sister to drop her school work and supplies out of her bedroom window so she can at least do her homework. To do her homework in the bunker, Becca has to use a cycle to build up enough energy to power the light in the bunker so she can do her homework! When the family is struck by a tragic accident, Karen Aldaine sinks deeper and deeper into the prepping way of life whilst working her job at the hospital and piling even more work on the shoulders of her elder daughter. Karen keeps important information from Becca and deprives her of a last goodbye.

My immediate thoughts upon finishing this book were that the insight into the world of fanatical doomsday preppers and their children. Interesting, pulls on the heart strings, so believable.

Summing up I really enjoyed reading this book, it felt different, a refreshing idea and view point on a prepping community, as well as being a coming-of-age story too. The book was really interesting and had great attention to detail about the prepping lifestyle and the bunkers featured in the story too. I know this book is aimed at the teen age group but I have to say as an adult I really did appreciate and enjoy this well written story.