ABOUT THE EPISODE
** Rose and Sam, still separated and desperate to find one another, face new fears.

** Rose and Nolan find themselves at the mercy of human evil when they’re overpowered and kidnapped. Sam and Barrett find themselves surrounded by illegal activity when they locate his gang, the Sins. ** 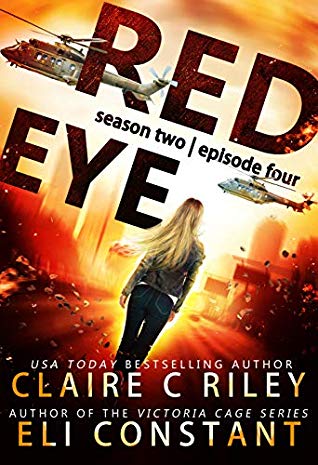 BLURB from Goodreads
When Rose and Sam find themselves in a military camp surrounded by other survivors, they have no idea that the darkest days are yet to come.
Rose, feeling more homesick than ever, looks to Nolan for guidance. With her plans of seeing the world now nothing but a pipe dream and her parents likely dead, she contemplates the bleak future ahead of her.
It’s getting easier to kill, but harder to hold on to hope.
Sam, still in shock over the realization that she’s probably becoming the very thing she fears, seeks reassurance from Barrett—the darkly protective criminal they freed from the airport jail. The end of the world is no time for romance, but he’s not the sort of man who takes no for an answer.
She’s feeling anxious, confused, and she’s got a terrible craving for red meat!
People used to say when life gets tough, there’s always tomorrow. But that was before the apocalypse. Now, life is a 24-hour cycle of hard knocks and who knows if there will even be a tomorrow.
The unlikely pair thought 30,000 feet in the air was hell,but being on the ground’s proving no better.All they can do is stick together, focus on whatever lies ahead of them, and try not to die.

I had tried to pre-order this one but had difficulties finding it but as soon as it was available, I bought it! As soon as I finish reading an episode I want to know when the next one will be available. I don’t know if it’s because this one is being released in Episodes or it’s the writing style but it really is addictive reading.

The cover for episode four is the same for all the Season Two books and still fits well with the colour scheme of the previous season, as well as fitting in with the content of the individual episodes.

This book is told from two points of view again, the whole gang back in one book! This episode covers the journeys of our four main favourite characters heading to Vegas and the dangers they encounter.

The prologue of this book gives us some information about the Sins Crew, the group of misfits and thieves that Barrett wants to head back to, though he does keep promising to take Sam to the Vegas pick up point for evacuation to see if Rose is there. Stash is telling two brothers, Randy & Bruce to get out scavenging and not to return empty handed, though if he were in charge, he wouldn’t send them out he would put them on a less important job such as ground operation. They usually leave a trail of destruction behind them and are normally high too. Stash is a quieter member of the Sin’s preferring to keep inventory of what they have and staying away from the other members of the crew as much as possible.

Then we have the stories of the separate journeys starting with that of Rose, Nolan and Andy’s. Nolan insists on doing all the driving despite Rose nagging to do what she sees as her share, though when they are chased, she is glad it wasn’t her driving as she isn’t sure she would have been able to drive as well as Nolan does. They are getting along okay together as a group and don’t seem to be suffering any adverse effects. In fact, Rose mentions the fact that fear certainly isn’t affecting Andy’s appetite, they are getting low on rations and they all needed a certain amount to keep going. The point of view then changes to Sam and Barrett and their journey, though still affectionate at times, in this episode we see Barrett in a different light and so does Sam. I don’t think she is overly keen on what she see’s either, though she recognises the fact she has a better chance at survival and finding Rose with him rather than without him. There is also a point in this episode when you wonder if Barrett recognises who is being kept in a cage. I think we will have the answer to that and a better idea on his true character in the next episode. I can’t say much more as it would give away too much.
There is quite a bit of humour/wit in this book and I have mentioned how Andy is always hungry, in this episode Rose actually comments that fear does funny things to people but a teenage boy’s priorities were still sleep and food! Then Barrett says something about what Sam did “before” and she jokes about being an “apocalypse ballerina” and having the “dance of the sugar plum zombies” to the sound track of Michael Jacksons Thriller. I do like it when books refer to popular culture and things like that. It makes the characters even more relatable. This review has been a harder one to do without revealing any spoilers so my review may make it seem like not much happens, but ….well you’ll see when you read it.

By the end of this episode you certainly have a lot of questions. Even though we get a deeper look into the characters of Nolan and Barrett I think there is even more to be revealed. Another tough guy character is introduced into this book, Nathan the head of the Sins Crew, basically what he says goes. When he says something, it is to be obeyed and is the law in the old waterpark the Sins Crew live in. I thought this episode ended a little abruptly but looking back at the episode it had to end where it did as it was on the cusp of “something” being revealed, which will make or break relationships and maybe interfere in with the Sins Crew too.

My immediate thoughts upon finishing this episode of Red Eye were
Arrrgggh! Can't believe it ended right there! Super cliff hanger, leaving me with lots of questions. Oh, and when can I read the next novella?
To sum up, we are back to getting both Rose and Sam’s points of view in this episode but and it’s quite a large but, I feel there is soooo much more to come in the next episode, which if it were available now, I would be reading right now! This episode had me daytime reading which is unusual for me as I feel I cannot concentrate as much because I get constantly distracted and interrupted during the day and end up having to put my book down (usually angrily) but I stuck with this one there was no way I was putting this one down!