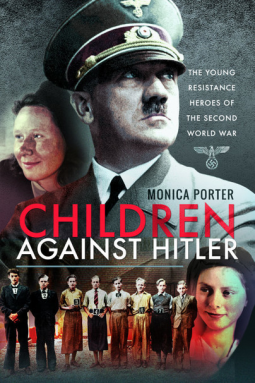 BLURB from Goodreads
Readers of all generations have grown up on The Silver Sword, Ian Serraillier’s best-selling tale of children under wartime occupation, but few know the real life stories of the children and teenagers who went further and actually stood up to the Nazis. Here, for the first time, Monica Porter gathers together their stories from many corners of occupied Europe, showing how in a variety of audacious and inventive ways children as young as six resisted the Nazi menace, risking and sometimes even sacrificing their brief lives in the process: a heroism that until now has largely gone unsung.

These courageous youngsters came from all classes and backgrounds. There were high school drop-outs and social misfits, brainy bookworms, the children of farmers and factory workers. Some lost their entire families to the war, yet fought on alone. Often more adept and fearless at resistance than adults, they exuded an air of guilessness and could slip more easily under the Nazi radar. But as nets tightened, many were captured, tortured or imprisoned, some paying the highest price – a life cut short by execution before they had even turned eighteen.

These children were motivated by different ideals; patriotism, political conviction, their Christian beliefs, or revulsion at the brutality of the Third Reich. But what united them was their determination to strike back at an enemy which had deprived them of their freedom, their dignity - and their childhood.

I wasn’t totally sure what to expect from this book as my history classes at school hadn’t really covered young children being part of the resistance. What I was taught about the resistance was that they smuggled airmen out of German occupied area’s and that they blew up transport links to hinder the German Forces. I had also learnt a little about the female resistance members that were couriers and radio operatives through reading books and watching films. After reading Hitlers Housewives and learning more about what Hitler did to his own countrymen & women, how they felt peer pressure to conform, or face serious repercussions I was instantly interested in reading about what the German people and people of the countries Hitler and his armies invaded did to resist.

This book really opened my eyes to the other perhaps some would say smaller acts of defiance and acts of resistance carried out by the children of the areas the German Forces occupied and ruled over. I so want to talk about all the children in this book, and it is important to remember they were all children when they began their acts of defiance
risking their own young lives along with the lives of their family if ever caught. I could seriously ramble on forever about these young heroes and each and everyone of them deserve to be remembered and talked about, but I want everyone to read the book, so I will mention just a few of them and try my best not to go into too much detail. Hopefully telling you just enough to have you desperate to read the book yourselves.

Two Dutch sisters are featured in this book, Truus & Freddie Oversteegen live in Haarlem with their mother, who though it was very unusual had divorced their father. The family were poor and were basically surviving on the very small handouts they were eligible for from the state. Truus and Freddie’s mother brought them up to be independent, strong minded women. It wasn’t long after the rise of Hitler that the family were sharing their home and wht they had with refugees that were being smuggled out of Germany. They had to stay under the radar as though not totally ruled over by Hitler yet, the Dutch government prohibited their citizens to have what were considered illegal lodgers.
At the age of 14, Truus left school and tried working as a domestic servant but her upbringing and her fire and spirit made this subservient kind of job impossible to keep, and Truus had many jobs that didn’t last very long. 14 year old Truus and younger sister Freddie aged just 12 years old soon became involved in distributing and underground anti-Nazis newspaper. They met Kees Boekman and became more involved in resistance activities. On one occasion Anton Mussert who was in favour and supportive of Hitler was dues to speak. Kees Boekman decided they needed to take action he urged Truus, Freddie and other youth members to encourage high school pupils to attend the meeting and make their anti-Mussert feelings known. The following night a large crowd of boys and girls arrived at the rally, on their bicycles as requested. Mussert approached the podium to speak and a pre-organised signal was given for the youngsters to all started sounding their bicycle bells. Then two members of Kees Boekman’s team ran up to the stage and cut the microphone wires. As Mussert carried on speaking without sound, the crowd roared with laughter at him. However, the NSB’s paramilitary wing, the Weerbaarheidsadeling that had been standing guard sprang into action, beating and hitting the youngsters and smashing their bikes.
Truus and Freddie were at one time the only female members in their section of the resistance group they were in. When deportations of Jews began the two young girls took on more dangerous missions, such as taking Jewish children to new homes where they could safely hide until the war was finally over. In taking part in this sort of activity, Truus and Freddie were defying the Nazis and were in danger of being caught by the Gestapo or being ratted on by Dutch collaborators. One young girl they moved ended up losing her whole family during the war and the couple who took her in hiding her ended up officially adopting her after the war was over.
The girls were taught how to use weapons and given an even more precarious missions to carry out, they were expected to “deal with” and remove as many Nazis torturers and Dutch collaborators as they could. These innocent looking children were basically taking part in drive by shootings using their bicycles! Another girl, 17 years old, Hannie Schaft, was brought in to work with the two sisters. Naturally the sisters were not keen to work with another to begin with but it wasn’t so long until Hannie proved herself and the girls became true friends and went on to carry out more and more missions. I would like to point out at this stage that the girls did not just obediently carry out missions they were told to, if they disagreed with something, they would have their say and could and would refuse the mission.

This is just one story of three young females that were not afraid to carry out increasingly more dangerous missions to help those being persecuted by the Nazis escape capture, knowing full well that if caught they would be beaten and tortured in the hope they would reveal names of different members of their resistance group. Sadly, the trio of girls did not all survive the war, but they had become so close that when one of the surviving girls married and she named her daughter after the girl that had been shot.

I read this book and it propelled me through a whole range of emotions, I felt proud of these children and their parents that knew what they were doing for being brave knowing what their fate would be if they were found out. I felt humour at some of the things the younger resistance members did to inconvenience the Nazis, then shock at some of the other acts these same youngsters committed, such as the using explosives to blow up bridges. It seems there was no act too small or too large for these young resistance members to willingly take on. It was amazing the way they could “play the silly child” if suspected of doing any wrong and fool the Nazis. So many of these young fighters had near brushes with death yet continued doing more and more missions. Things like stealing guns, hiding weapons, transporting weapons, or transporting radio parts, and messages. So many of these acts being the way the Allied Forces communicated with the resistance. Then you think of the lives these youngsters saved, the Allied force members they smuggled out, the Jewish children the moved to different homes one step ahead of the Nazis searching for them.
These children did all of this for nothing in return. If/When caught these children were beaten, tortured, starved, put in prison, sent to hard labour camps, or concentration camps where they were worked to death, or had medical experiments carried out on them.
Years later some would be recognised, having streets named after them. Whereas others were completely overlooked, simply labelled as trouble makers. Then there are still some that just seem to have initially been forgotten and just not talked about as much. Every single one of them deserve recognition for what they did. They all deserve their stories to be told, to be remembered and handed down to future generations.

My immediate thoughts upon finishing this book were just three words, interesting, informative and inspirational. I felt stunned, shell shocked by what I had just read and learnt. I usually read a non-fiction book alongside a fiction one, but I got to the point that I had to read this book. I didn’t want to put it down. I felt compelled to continue reading and ended up finishing the book late one evening. I think this is a book that will stay with me forever. Every time I hear of a survivor dying, or an anniversary of a camp liberations, or anniversary of a certain resistance act I will remember the children in this book, their bravery and actions.

To sum up this book sheds a light on certain areas of the resistance that in my opinion were not widely publicised. In that the films about the era tend to be about the concentration camps, or the resistance blowing up transport links, which in this book some of the young resistance heroes do take part in. The young resistance members took part in so much more yet seem to have been forgotten and are not really talked or taught about in schools etc. To be honest I believe our schools should be teaching more about World War 2 and what went on than they are at the moment. This book really is a moving, emotion invoking read.