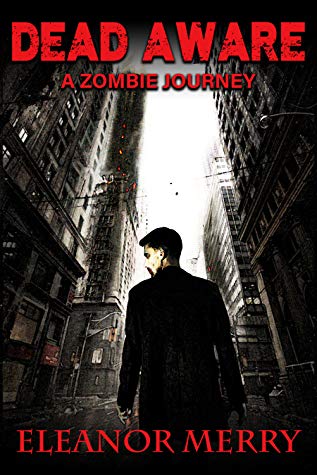 BLURB from Goodreads
Fever Induced Rapid Encephalitis; AKA. F.I.R.E.This is the name humanity gave for the virus that covered the globe within days. A highly contagious disease that first seemed to be a run of the mill flu but soon turned into something much more sinister.When Max and Clara Jacobs married 20 years ago, they promised to love each other until death did them part. But what happens after that?The devoted couple are at opposite ends of the country when a highly contagious virus sweeps across Canada, making zombies of a third of the victims. Waking after death, Max and Clara must learn to accept their new forms, and navigate a chaos-ridden world filled with people who are out to get them.Dead Aware is a post-apocalyptic novel written mostly from an undead point of view. Motivated by love this is a story of death, adventure, acceptance… and zombies.


I had already read and really enjoyed Zombie Mom, and Vagrant Youth both from the same Dead Aware series, so I knew I had to read this book, I needed to know more! I will be totally honest I aren’t overly keen on the cover for this book, though it’s the content that truly matters and that does not disappoint in any way!

A virus has broken out called Fever Induced Rapid Encephalitis, shortened to the acronym FIRE, which originated in India but soon spread worldwide. FIRE sort of begins like a bad case of flu, with a fever, lethargy, aches & pains, vomiting, diarrhea, photophobia, confusion and seizures too. Then people die. But. . . . and it’s a rather large but some people come back to life. Some of them are mindless flesh hunting and eating “zombies” and another “but” others turned are coming back zombie like, yes, they are tempted to hunt and eat flesh but they retain some of their humanity, enough of their humanity to know right from wrong and having memories of their lives before.

The main characters in the book are Maxwell Jacobs and his wife, Clara Jacobs. Clara and Max have been through a lot, they tried for a long time to have children and Clara finally became pregnant only to lose their child 6 months ago. So, when Max reveals he has to go on a business trip, Clara is upset and she really doesn’t want to be alone.
It is whilst Max is away at his business meeting that the virus really takes a hold on the world. Max himself becomes ill, and goes through the different stages, from the fever right through to the waking up knowing something is different but not being sure what. When he looks into the mirror in his room, he see’s a reflection of a changed man, his once clean hair is greasy, dirty and sticking out in all different directions. The biggest change is in his face. His skin was now alabaster and devoid of colour other than brown fuzz covering his cheeks and his veins stand out against his skin, with his lips now having a bit of a blue tinge. His eyes colour is now vivid blue! Max feels odd, he feels slower and can’t remember his own name! More disturbing for him is the way he looks at the door and the door handle but can neither remember, nor work out how to use the door handle to escape his hotel room. A teenaged boy called Jason is running from someone who is of the mindless zombie type and takes refuge in Max’s hotel room. When Jason see’s Max and the fact he too is a zombie he rushes to the hotel rooms en-suite and locks himself in. Over a few days they befriend each other with Jason eventually teaching Max how to open the hotel room door when it becomes a possibility he may die. Max watches over the teenaged boy, hoping he will not die, the feels guilty about wanting Jay to be an “aware zombie” like himself.

Whilst all this is happening to Max his wife Clara is at home desperately trying to contact him but with the world in disarray because of the virus there are no ways to communicate any more. Clara ends up caring for a neighbour when she becomes sick so it’s no surprise when Clara becomes sick herself. Clara literally goes to bed clutching an old photo album and prepares to die. Clara also becomes an “aware zombie” but she is captured by the army and taken to an army base and put in a cage with other zombies that have varying awareness. It’s there that Clara meets a scientist charged with learning more about the “aware zombies” called Rachel Samborski. Rachel is trying to gain the trust of the zombies and is unaware to the extent of their ill treatment by the army guard to begin with. It soon becomes apparent that Rachel and Clara need each other, and they need to get away from the army as quickly as possible.

Once I started this book I was hooked, I seriously hated having to put it down to . . .to do anything, eat, drink, or sleep! I thought that the world building and setting in the dead aware series is really great. You can visualise the scenes this author writes. You feel like you are right there in the overlooking all the action. There’s not only the main story of both Max and Clara wanting to reunite but there’s the other characters and what they want now their lives have irrevocably changed due to the virus.
I adored the family that Max and Jay find and stay with for a while and would love to know more about their specific story and what happens to them, maybe in a novella?

My immediate thoughts upon finishing reading was I honestly really adored this book, in fact, I love all of this series that I have read so far, and yep I am definitely looking forward to and intending to read more!

A Zombie Journey has the same family feel throughout it as Vagrant Youth & Zombie Mom had. The characters may not be biological related, and they may be made up of survivors, and aware zombies but they create their own hierarchy and have deep, protective feelings and family love for each other. I will forewarn you that there is a really sad ending for one of the characters I had instantly adores and had become rather attached to.
This book certainly left me yearning to read not just more of this zombie series but willing to try out some other zombie fiction too. I think the idea of the existence of the “aware zombies” is a fantastic, I guess they are a kind of hybrid, different type of zombie, rather than what you may immediately think of when the word zombie is used.
I would love to read more about Jay, and I am hoping that Max & Clara join Sam & Guy at some point soon. I would also be interested in what happened to Sue, Lucy & Chip. Oh, and more from Rachel maybe too, both her life, why she is immune and what she can or will do to help the “dead aware”.

Finally, to sum up, I honestly haven't read much zombie fiction but will look out for more in the future. I really liked the differences in humanity in this book, the humans, the zombies that could talk, remembered & loved and those zombies that were the more typical attack & bite first zombies.