REVIEW - ONE NIGHT - A JUST FRIENDS PREQUEL BY MONICA MURPHY 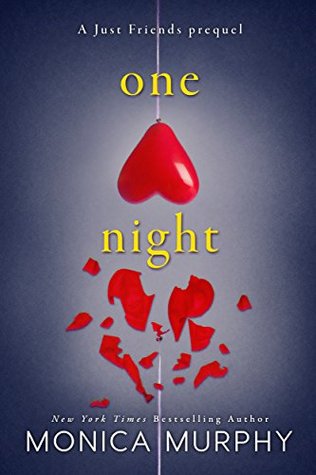 BLURB from Goodreads
There's a party over at Jordan Tuttle's house tonight and everyone is there. Including... Olivia: Who's leaving for her dad's house in Oregon tomorrow. So she plans on having the time of her life tonight with her best friends. Dustin: Who wishes Livvy could see just how much she means to him. Emily: Who's trying her to best to get with someone. Anyone. Cannon: Who has an encounter with Em he won't be able to forget. Amanda: Who's finally ready to go all the way with her boyfriend. Tuttle: Who discovers the girl he's always secretly liked just might like him back.

I had read quite a lot of long books and fancied a shorter read, so when I came across this one on my kindle. I thought I would give this one a go. I really like the cover and it certainly fits the book giving it a contemporary romantic feel. There is a “warning” with this book as there is adult content. To be honest with what programmes show on tv these days I don’t let the warning put you off. I would say older teens as a minimum age so I would probably remove the YA label and add NA instead.

The book is about a group of friends who each have their own problems, thoughts and romantic notions. The party at Jordan Tuttle’s house is the main venue of what goes on in the book. We meet Dustin and Olivia first as they are going to a party. Olivia immediately wants to know where their other constant friend, Emily is. When Dustin explains she is meeting them at the party she is a little shocked as the arrangement had been for them all to go to the party together. Though the three are all good friends, lately the “friend” label has been changing a little for Dustin and Olivia and they have been in Olivia’s words “messing about” a little. Olivia is worried that if they change from a friendship to a boyfriend/girlfriend relationship and things go wrong it will spoil everything. The whole is it more than a friendship relationship is further complicated by the fact Olivia sets off to her fathers home the day after the party for the rest of the summer. Olivia has grown to hate going to her fathers but her when her mum points out it will probably the last time, she will go for some time due to going to university etc. Olivia caves and agrees to go.

Everyone that’s anyone and everyone else too, is at Jordan Tuttle’s party. His parents are away a lot and his parties are somewhat famous or perhaps that should be notorious. The house is palatial inside with en suite rooms, a hot tub, swimming pool and more to be used. Jordan is a love them and leave them kind of guy but when an opportunity of something with a girl he would like more from arises should he take it or not. Can he get Amanda to trust him?

Emily is at the party when Dustin and Olivia arrive, she’s already had plenty to drink, or could she be high too? Emily tries to play up to Dustin, but he only has eyes for Olivia. Even though Emily is quite literally offering herself on a plate to anyone and everyone. Emily is becoming known as the girl that gives good “blow-jobs” to whoever shows her attention.

It’s as if there’s something weird in the air or the drinks because Cannon is also usually a love and leave them guy too, but he turns out to be a fairly sweet guy who doesn’t want to take advantage of a drunk Emily. In fact, he prevents others from taking advantage of her too.

The book is told from the different points of view of the party goers. The majority of the book deals with the party itself and what goes on and it’s fall out. There is also a smaller section that occurs when Olivia returns from her father’s home. It seems Emily has become very “popular” whilst Olivia has been away. There is also an introduction of a new character called Ryan who is a rather confident, if not over confident new pupil at their school. When Olivia meets him at Emily’s house, he is somewhat over familiar with her, and actually flirts with her despite knowing of her fledgling relationship with Dustin. Though Dustin does seem to have attracted the attention of a persistent girl whilst Olivia has been missing over the summer.

I enjoyed reading the novella. Monica Murphy created some great characters and I would like to read more and learn more about them.

My immediate thoughts upon finishing the book were
Really enjoyed reading about the different characters. Definitely adding book one to my “Want To Read” Wishlist
Hope to catch up with the characters that were at Jordan Tuttle’s party too.

To sum up the major parts of the book all happen at a party full of teens with crazy mixed up emotions and pre-fixed ideas about one another and a lot of alcohol and perhaps drugs too.
I did enjoy the book a lot and would certainly like to read more. I think this prequel novella makes a great introduction to what could be a potentially great series!