REVIEW - US AGAINST ALZHEIMERS BY MARITA GOLDEN 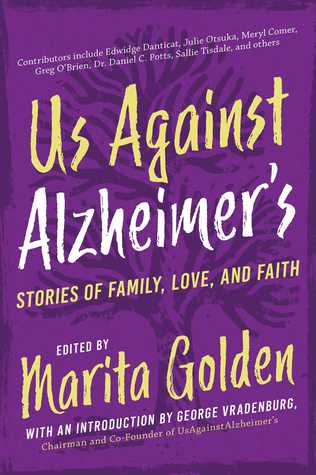 BLURB from Goodreads
This groundbreaking multicultural anthology shares moving personal stories about the impacts of Alzheimer’s and dementia.An estimated 5.7 million Americans are afflicted by Alzheimer’s disease, including 10 percent of those over sixty-five, and it is the sixth leading cause of death. But its effects are more pervasive: for the nearly 6 million sufferers, there are more than 16 million family caregivers and many more family members. Alzheimer’s wreaks havoc not only on brain cells; it is a disease of the spirit and heart for those who suffer from it but also for their families.This groundbreaking anthology presents forty narratives, both nonfiction and fiction, that together capture the impact and complexity of Alzheimer’s and other dementias on patients as well as their caregivers and family. Deeply personal, recounting the wrenching course of a disease that kills a loved one twice—first they forget who they are, and then the body succumbs—these stories also show how witnessing the disease and caring for someone with it can be powerfully transformative, calling forth amazing strength and grace. The contributors, who have all generously donated their work, include Edwidge Danticat, Julie Otsuka, Elizabeth Nunez, Meryl Comer, Greg O’Brien, Dr. Daniel Potts, Sallie Tisdale, and Nihal Satyadev. Reflecting the diversity and global nature of the dementia crisis, this anthology is published in collaboration with UsAgainstAlzheimer’s

I’d like to think I approached reading this book with an open, unbiased way but feel I should point out that I do have experience of dementia within my family. First of all, with my Uncle who was diagnosed with Early Onset Dementia & Alzheimers. My Uncle’s immediate family placed him in a care home that has experience with caring for dementia patients. He has been there, bed bound for many years, he cannot do anything for himself and he basically drifts in and out of sleep. I also have a closer experience with my dad. He was finally diagnosed with Mixed Dementia, consisting of Vascular Dementia and Alzheimer’s in January 2018. I moved my dad to my home from his bungalow as it wasn’t safe for him to continue living there alone. I cared for my dad along with help from my daughter until 7th December 2018 when he died. I believe my dad had dementia for many years before he was diagnosed. I had been actively trying to get him a diagnosis and some treatment for at least 18 months prior to his diagnosis.

This book consists of information and stories about dementia from all angles. From those with dementia in care homes, to those with professional carers attending daily, to those like myself and my daughter who care for their loved one at home themselves. As the blurb states, the book has fictional stories as well as real factual ones. Be prepared to feel a whole range of emotions, sometime tears of sadness, other times tears of laughter.

The book begins with a story told by Jane Bandler and her husband Don. Don has lived in an assisted living community for a year and a half. Their story begins with an 8am telephone call from the director of the facility informing Jane that Don has become extremely angry and agitated, his behaviour had become aggressive and they thought he should be moved to the nearby hospital. Jane expressed that she didn’t know why this would happen and asked the director to wait until she has travelled the 25 miles to the facility. Jane had heard many horror stories of what happens in hospitals with dementia patients. Jane was around half way to the assisted living centre when the director called her again saying that Don was already at the emergency room but they wanted her to go see them at the facility before going on to the hospital. When Jane arrived at the home, they told her that Don had become so violent that he had to be sent to hospital for the safety of the other residents. The home had to call the Police to escort Don in an ambulance to hospital. The home had wanted to explain the situation to her face to face. Jane had been a caregiver to Don for 9 years, and during that time she had learnt to take one obstacle at a time as they rose. Jane then has to take a rather scary drive to a hospital using verbal directions given to her by the staff. Jane doesn’t know where the hospital is and has to find it alone whilst stressed herself as staff cannot accompany her. When Jane arrives at the hospital and walks through the door’s she can hear her husband shouting obscenities at the top of his voice. A security guard stopped Jane and she explained who she was. The guard advised her not to go into the room as Don was violent and the hospital staff were trying to get him under control. Jane goes into the room whilst staff are attempting to put Don in arm and leg restraints. Jane actually says within her story it was as if the hospital staff didn’t know Don had dementia, the way he was being handled and treat. Jane squeezes into the room with the guards etc and gets in front of Dons face so he can see her and hear her when she talks to him. He immediately relaxes and stops shouting. The guards etc let go of him and Don remains calm and looks at Jane with relief. Jane goes on to say she realised she was Dons security and they had a bond of love that could not be broken.

The book also contains facts such as;
Every 68 second another person falls victim to dementia
Over 50% of those who have dementia remain undiagnosed.
There are over 15million caregivers

The book gives other examples such as a daughter caring for her mother who has dementia. The mother is quite religious and that helps them cope together. Being a caregiver is extremely stressful. The book also tries to show the funny little quirks and mistakes that can be laughed about as well as other loved one’s reactions to dementia. There is also a story where the daughter of the loved one with the dementia, recites the Lords Prayer to her loved one until she calms down.

Vicki Tapia shares the poignant, heart breaking moment she sat holding her mothers hand saying that it was ok, that she could go if she wanted, that everything would be okay before her mother passes.

A lot of people, fellow carers I have spoken to online myself say they have gone through the dementia and into the palliative care stage and told their loved one it was okay for them to go now prior to them passing.

The book has opinions of son, daughters, spouses, and family of those with dementia who care for them in either their loved one’s home, or the carers own home. Then there are those with dementia who are placed in various types of assisted cared facilities. The book also has stories and information’s from the point of view of professional carers that go into the dementia patient’s home, or they work in a care home.

I don’t know what I expected from the book, some sort of acknowledgement that I had done the best thing for my dad taking him into my home to care for him until the day he died. Or maybe something that would tell me that the best place for my Uncle is the care home he is in. I felt a kind of kinship with some of those that have shared their stories but at the same time irritated and annoyed with some of the stories. Is this book like a handbook of what to do and not to do? No, Does, it compare options via stories about what its like have a relative with dementia? Yes. Are there stories about care homes good and bad? Yes.

After reading the book and in some cases feeling I wanted to shout at those telling the stories that their loved one wanted to be home with them etc. I came to the conclusion that the best option for one family & loved one with dementia may not be the best option for another. Those with dementia are still individuals, yes they may share a diagnosis of dementia, but that doesn’t mean they are all the same. In the same way as some families, can keep their loved one at home and do everything that needs to be done themselves, others can keep their loved one at home with some outside carers coming in to help, ad finally other choose to place their loved one in a facility such as a care home to care for them.

Would I have found this book helpful to me when caring for my dad? In one way some of the stories shared were uplifting whilst remaining realistic on how much work is involved, but on the other hand no as it would have irritated me. As soon as my dad was diagnosed, I moved him into my home and I promised him I would care for him myself (with the help of my daughter) and I would never put him in a care home. Sure, there were times when things were particularly bad, when he was violent, times when I doubted myself, asking myself if I was doing enough for him etc.

I think this book is suited to those who want to know more about dementia and the options for caring for loved ones with this awful disease. I had books recommended to me and books I came across as a blogger that I have found useful. They all fill different needs. Did I enjoy reading this book? I can’t honestly, truthfully say yes because at times I hated it, rather like dementia itself. I did find some parts of it interesting though, and other parts felt a kind of camaraderie with some of the story contributors. I guess it all depends on what you want from the book. Also, the book is told by those in the US and I am in the UK so there may be differences on caring and dementia treatment etc.