A brand new Breeders Universe Story
that will keep you up reading past your bedtime. 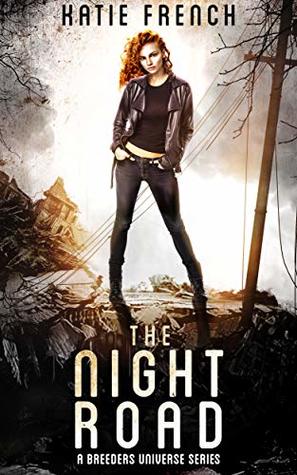 BLURB from Goodreads
Five generations after Riley and Clay first set foot on Shiprock, the community is thriving. Liberated from the Breeders, the new society is free to live and love how they chose.
Eighteen-year-old Meg is Shiprock’s apprentice gunslinger and wise-cracking security guard, keeping the people safe as she patrols the stony cliffs. She can hit a target at fifty paces with her eyes closed, and yet, she’s never ventured outside the sheer cliffs of her home. It isn’t safe out there. Marauders still roam, snatching up unsuspecting victims.
Then a plague hits their peaceful city. Her sister, and only living family, falls ill.
People will die if a cure isn’t found.
Meg ventures out to find renowned doctor Fulton Tally and a cure to save her sister and the town.
But untold peril awaits. Will Meg’s training prove enough to survive the night road?
Goodreads Link
PURCHASE LINKS
Amazon US
Amazon UK

REVIEW
As I have read and totally loved the Breeders series and its fantastic characters and though I thought the series came to a great end, I still felt like I wanted to read even more stories set in the same era and world of the Breeders. As the introduction explains The Night Road is the first book in the Second City series which is set in the Breeders universe a few decades on.

So I was really looking forward to reading more from the same universe but then I had to wonder if it could possibly live up the the Breeders series? Would the characters be as believable and likable as Riley and Clay? How much will the world have changed? What will the new challenges be?

So of course after thinking about all those questions I knew I had to read it!

The cover has a post apocalyptic feel to it with the broken down buildings in the background. From reading the blurb I would say the female on the cover is Meg who is a gunslinger. The cover certainly makes me think that women are still being treat "normally" and are still "kick butt women" like Riley!

As the book is set in the same universe as the Breeders and after reading the book I would say it falls into the Sci-Fi, Post Apocalyptic, and Dystopian genres. It also has suspense, plenty of action and some betrayal too.

As the blurb says this book is set decades into the future and is set in the settlement called Shiprock that was formed at the end of the Breeders Series. The "outside" still isn't safe and consequently Shiprock has its own security measure and gunslingers to protect it. In fact the book begins with Meg being an apprentice gunslinger and is on night duty which is usually quiet and boring! So when Meg spots a male trying to scale the steep rock sides to sneak into their settlement she is kind of excited. Meg knows if the guy doesn't fall to his death that there is very little trouble he could cause in Shiprock. There are actions in place to deal with those that try to sneak in. In fact there is no reason to sneak in as if you approach the front gate you can be asked to be allowed in. The guns and ammo for the gunslingers that protect Shiprock and those that still go on supply runs is supplied by Herrick, Guns & Ammo.

Shiprock was once run by a man called Barrage and it was he and his men that made the impenetrable fortress. When Barrage died around 60 years ago, it was one of Megs ancestors that took over to create a free city. The present Mayor of Shiprock is Trax. There is very little crime or wrong doing in Shiprock. However if someone does commit a crime, become drunk and disorderly or break a rule then they can spend time in the "cooler" or have their food rations reduced. The fact life is co good in comparison to what is "outside" means most people behave. The only infractions are usually kids fooling around. The city at Shiprock has grown from just a few dozen citizens to having around two hundred people. There is a school, nurses for an infirmary that has been created, as well as a hunting team, a farming team, a security team and a maintenance team etc. The young residents attend the school until the age of 11, and then they take a job so that they are contributing to the city in exchange for food rations.

I really don't want to give away spoilers so forgive me for being more vague now rather than continuing in great detail. Meg and this man end up in a fight and the man stabs her. So Meg is in the infirmary recuperating when the first cases of a new flu like illness are brought in. Meg is immediately hustled out in an attempt to prevent her catching the illness.

As well as guarding the borders of Shiprock the highly trained gunslingers are the ones that go out on scouting missions and retrieve supplies. Meg aspires to being a fully qualified gunslinger. Kace who is married to Megs sister Shannon has taught Meg how to shoot and fight. Kace and Shannon are both gleaners meaning they go "outside" looking for supplies that may be needed back at Shiprock. There is still lots of danger around during all scouting missions and it is during one of these missions that Meg's sister Shannon comes back with the symptoms of the new flu like illness Meg decides she needs to go out in search for medicines to help her sister.

The rest of the book covers how Meg talks her way into being the one sent out for medical supplies. There aren't very many volunteers to go "outside" to search for medicines that are a scarce luxury in the world as it is now. It is revealed that there is someone in existence who maybe able to help. Of course Meg immediately plans to go looking for this person who could help her sister.

The rest of the book tells how Meg sets off with someone whom she presumes she can trust with plenty of supplies and a great vehicle for the terrain she needs to travel. Soon she finds herself alone, with no vehicle, or supplies and just a letter of introduction to give to the person who could possibly save her sister.

One of my most favourite characters in the book is Meg who reminds me so much of Riley with her "anything a man can do a woman can do" ("and probably do it better!") attitude. Meg is also impetuous, and to begin with thinks she is infallible. Meg soon realises that things in the "outside" are still very similar to what her ancestors experienced, but she has the motivation that if she doesn't find help and supplies her sister may die.

I also liked the character of Trax, I really want to know more about his ancestory and his history. Why doesn't he go by his real name Henry? What is he trying to hide? And will the letter he wrote and gave to Meg convince his friend to come to the aid of those at Shiprock? Trax is best friends with Meg's sister Shannon and the Mayor of Shiprock.

There are a couple of characters I enjoyed "hating" too, but I won't reveal those as I don't want to influence what you think of them as to begin with their bad sides are not revealed!

I really enjoyed this book, I loved trying to work out who the various characters in The Night Road were descendants from. I have wrote down what I think and who I think is related to whom! I'll be interested in finding out what other readers of both series think as well as the familial connections are hopefully revealed as the series develops. Or maybe Katie will do some family trees for her breeder fans!

So to finish up my final thoughts are that I thought that the Breeders series was an amazing series and I think that this series called the Second City that is set in the same dangerous universe could potentially be just as fantastic! Definitely looking forward to more, the Second City Series is firmly on my "Must Read" list!!