REVIEW - THE BROTHERS - THE BREEDERS SERIES BY KATIE FRENCH 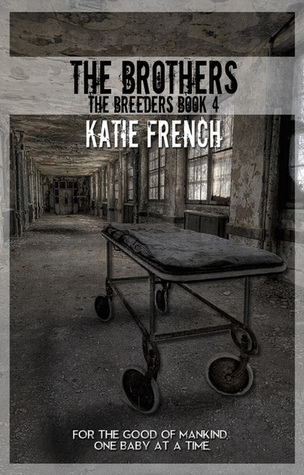 BLURB from Goodreads
“They tell me it’s for the good of humanity. That I’m saving our way of life with my body. They lie.” Book Four in the award-winning, best-selling Breeders series.Riley has survived madmen, deranged doctors, and false prophets. Her next task is uniting her family, which has been ripped apart by Nessa Vandewater, the Breeders’ enforcer. Her boyfriend Clay and brother Ethan are still missing. Only she can find them. But on her way, Riley is stung by a scorpion. To ease her suffering, Auntie Bell shares the story of Riley’s mother, Janine, and how she escaped the Breeders. Nearly twenty years in the past, Janine, an obedient Breeders girl, is nearing her seventeenth birthday, and the clock is ticking. She has two months to become pregnant, or she’ll be put out, sold into slavery . . . or worse. When her doctor informs her she’s infertile, she’s devastated. But some doctors lie, and one in particular seems to want Janine for his own . . .

REVIEW
I must admit I had this book on my kindle and in my reading list for a while. Sometimes I just want to read a book that I am 99.9% sure I will enjoy. There are times I could sit and binge read just one author, so I do make a conscious effort to try to vary my reading. So I'd tried reading a couple of books and just wasn't getting drawn in, so I gave up and immediately went to one of my favourite authors and decided to pick up the Breeders Series again. I had recently re-read The Breeders Series novella's and was left wanting more so chose to read the next book in the series which was The Brother's.

So the cover I have chosen to feature within this review is the one that was in use at the time I downloaded The Brothers. The cover has a grey background and depicts the inside of a worn and tired looking hospital. The walls have peeling paint and the flooring looks shoddy too. There is a hospital trolley with a thin mattress on it abandoned in the dim, desolate looking hallway. The book title, series title, and author name is in a fairly plain font style but is bold and stands out on the book cover. I also like the addition of the byline which says "For the good of mankind, one baby at a time" which is a mantra that is repeated time and time again by those that believe in the breeders and their cause. I think this cover fits both this book and the rest of the series. The newer, most recent cover (I have put below this review) is a much more colourful and has a more modern feel to it. Being totally honest either cover would make me curious enough to pick it up from a bookstore shelf or click on it in a virtual store to learn more about it.

The only worry I have when reading a series is the thought of forgetting an important incident and the story not making sense to me. However I should reassure all The Breeders series fans that there is no way you can do that with this series as at the beginning of the books Katie French includes a recap section of the key facts you need to remember from the previous book.

The book then gets straight back into the action, Doc, Auntie Bell and Riley have stopped the van they are travelling in for a much needed rest in the heat of the day. Riley has been driving for hours and in Doc and aunties opinion it is time for a rest stop. Riley as usual is restless so decides to stretch her legs having a walk round. She decides to find somewhere with some cover so she can relieve herself before returning to the van to try and talk Doc and Auntie Bell into allowing her to begin driving again. Its as she is crouched down behind a bush that she is bitten by a scorpion! Yep, typical Riley, she has to be the unluckiest female ever! She just happens to be near a scorpion and is bitten. The pain begins to come on rapidly, though Riley forces herself forward to get as near to the van as possible, she knows she won't make it. The best she can hope for is to make herself easier to find if/when Auntie or Doc come searching for her. Riley is in so much pain she can't even shout for help. When she is found by Doc she is taken back to the shelter but still hot humid air of the van. Both Doc & Auntie say she is in no condition to drive they now have no choice but to have a rest.
Doc cleans the bite with what little they have and it soon comes down to distraction techniques being the only type of pain relief readily available. Auntie Bell says she will tell Riley the story of how her mother Janine met Arn. Doc actually openly scoffs at a story being any help in this situation but Auntie Bella knows best and begins telling Riley a story she has promised to reveal before but has never had chance to.

That's where the flashback into the past begins as Auntie Bell reveals how she met Janine at the Breeders hospital. Auntie Bell was there as most of the older women were to take care of the young females when they were fertilised and made pregnant as well as taking care of the babies when they are born. Auntie explains how the females were allocated their rooms on the basis of how well they reproduced. The girls considered better are on a higher floor better rooms, and more privileges. Then there's the not so fertile girls or the new ones that are yet to have a pregnancy. Despite the girls being separated into different groups they all come together in the communal rooms such as the recreation room and the canteen where they all have to go to eat. The girls all wear the same sort of nightdress but have little roses embroidered on them, each time they have a successful pregnancy. If a baby girl is born the child is brought up by the Breeder Hospital nannies and grows up to become a breeder herself. If the baby is a boy, he is given to the men on the outside to bring up. Those that choose to bring up a male child are given a small amount of money on a monthly basis to help with the costs. The girls only have a certain time frame to conceive in, which means if you cannot be made pregnant you are considered "no use" at the Breeders Hospital. So the girl would be sold quite literally to the highest bidder. Which usually meant a life as a slave that is passed around to be used by men. So when it seems like Janine is having problems becoming pregnant, Auntie Bell plots and plans ways to help her. I want to tell you more but to do so means slipping into spoilers territory which I prefer to avoid.

I still love Riley as a character, she remains a strong minded female, I like the way she doesn't sit back waiting for a male to rescue her, she knows what she wants and is prepared to do whatever needs to be done to obtain it.
Within Auntie Bell telling the story about Janine we also meet new characters, as the title is "The Brothers", they played a large part in Janine's life. The Brothers are twins, both looking alike, yet their personalities are very different.
One brother is serious, keeps himself to himself, who puts over a harsh exterior and persona to strangers. He is more particular who he will mix with, preferring to stay away from situations with loud, bawdy men competing in stupid games and gambling. He has built an invisible protective shell over himself and his other twin. He is the leader of the two brothers. If you are wondering both brothers make great "Book Boyfriend" material.
The other twin is a more fun loving, he survives the wants to block out the ugliness of the world and live in a life of his own creation. He needs regular medication. He likes to join in by watching the games that are gambled on. He sneaks off from his other brother, doesn't stick to the rules he has been given, preferring to act like a little child at times and mixing with some seriously bad people who think nothing of killing humans for sport and collecting debts by chopping off debtors limb! It's these ruthless men that get hold of Janine and want to use her for their sick gambling games. When she wins the first game, there is uproar as lots of men lose money and limbs. Obviously we know Janine somehow survives as we wouldn't have Riley who is the child Janine is carrying and trying to keep secret during this tale Auntie Bell is revealing. So the question is can one or the other brother save/rescue Riley and them all flee unscathed?

This book is filled with action and easily fulfilled my high expectations. As with the rest of the series, the book is well written and in this book is told from the three main characters of the book, Riley, Doc and Auntie Bell. I thoroughly enjoyed learning about Janine's story as well as learning much more about Auntie Bell too. I had wanted to know more about how Riley's mum came to be pregnant and free from the Breeder Hospital, as well as how she met Arn and what his life had been before Janine & Riley. I loved how Riley's parentage was revealed, maybe that is something that may be built upon later in the series? Perhaps Riley will want to search for him or quite accidentally find him? I am looking forward to reading more of this series as soon as I can. It really is addictive reading! Almost forgot to mention that I loved the way that Katie French delivered the reader Janine's story, it would have been so easy to create a novella for Janine, and Janine & Arn's meeting story but I truly loved the way it is Auntie Bell who was with Janine at the Breeders Hospital and all the way through to her meeting Arn etc. I never gave Arn much thought in the other books, but after reading his and Janine's story I really saw him in a different light.

My thoughts immediately upon finishing reading this book were . . . Oh wow, an amazing read, I loved reading about Janine, Bell, and Arn's meeting story... brilliant!