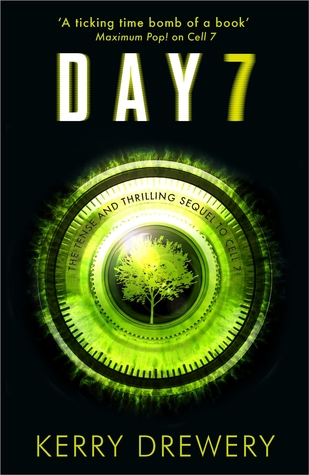 BLURB from Goodreads
The tense and thrilling companion to Cell 7.Martha Honeydew has been released from the terrifying Cell 7. But despite her new freedom, the corrupt judicial system is still tracking Martha's every move. And Isaac, her only trusted friend, is now imprisoned in the very same cells she was. Isaac saved Martha's life, it is only right she now saves his. But with Martha still a target, her chances of saving Isaac are remote. Martha begins to question whether it is ever possible to escape government scrutiny. Will Martha and Isaac ever reunite? Will they ever live in a better world?

REVIEW
As I really enjoyed Cell 7 back in October 2016 and had read there was to be a follow up book by the name of Day 7 I had been excitedly awaiting it. I found Cell 7 to be really different to the other dystopian books out at the moment. In fact the society is quite futuristic but totally believable that there is a possibility that our own world could one day have a court and prison like the one featured in this book series. I'm eager to know where the book will pick up, where is Martha now? Can anyone help Isaac? Will Isaac be denied the one small concession of a human counselor or will he be one of the first to have to talk to a fully computerised counselor?

The cover is as eye-catching as Cell 7, though this time the colour is green. In the centre of the "eye" or maybe a "camera lens" there is a tree. . . could that tree be a reference to the tree Martha used to try to catch a glimpse of during her incarceration. Maybe the tree represents the growth of something? Perhaps a banding together of those against this present justice system.

There is a brief prologue which picks up right where Cell 7 left off. Martha is being escorted from the studios after been let out of her cell. There's photographers flashing cameras and people taking pictures on their mobile phones and all Martha wants is for them to leave her alone to get her breath as she is naturally still stunned at being freed. She frantically grips the ring that Isaac gave her. Martha is now scared that Isaac will be given the death sentence and if that happens Martha feels part of her will die along with him too.

The TV programme set up is still fairly similar to that in Cell 7. They use the same "Buzz for Justice" eye logo. The audience seats are as usual full to capacity already. There is a slightly raised witness box as well as an area for three panelists, each with their own large blue buzzer in front of them.
The first offender is brought in, Gus Evans, who was previously given a second chance. Gus has only been free for 7 days! Kristina the presenter in her perfect grey pin stripe suit and pale blue blouse introduces Gus, then shows some CCTV footage that firstly shows him holding a banner saying "one person, one vote" then it shows the demonstration getting out of control and shows Gus with his hands on an overturned car. Once CCTV footage is seen by the audience at home and in the studio along with the panelists Gus is given 30 seconds to protest and say why he is innocent, but 30 seconds is not very long and it seems by the time Gus works out something to say his time is up! Kristina reads out what punishment Gus will have if found guilty and then goes straight to the three panelists who decide whether Gus is guilty or not. The first panelist is Ava, a pensioner who has always wanted to appear on TV,the second panelist is Sadiq, a male interested in getting into the music industry and finally Candice who wants to become an actress. So all panelists are really there for their own purposes and agenda, irregardless of the case they will vote on. How fair can a trio of panelists be if one of them can be swayed by the offer of an audition in return for a press of the guilty buzzer?!

So as you will have read the last book you will know that it is Isaac in the Cells. Martha has been released and gone with the only people she knows and trusts, Eve, Cicero and Max but it soon has to come to an end as the government, in particular Prime Minister Stephen Rennard want Martha locked away in some sort of institution where she will not have a voice. In fact in some parts of the book you realise that the Prime Minister will stop at nothing to shut up anyone that speaks out against any of his policies or ideas. The Prime Minister is very crafty and can spin things to suit his own ends.
A character I really loved is killed in this book and though the Prime Minister didn't wield the knife that killed her, he may as well have. It seems in this book that no one is safe!

Whilst Isaac is going through exactly what Martha did. He has to endure his own experience and think of how did Martha cope. Isaac has no outside contact at all, he doesn't have Eve as a counsellor like Martha. The new counselling is in effect so Isaac has to speak to a computer. When he asks questions he is warned that he will forfeit is right to counselling.

Once again it is Eve, Cicero and Max trying to help Martha get Isaac out. Max tries the ways he helped with getting the public on board. They think it will be easier to get people on their side because of them showing the video and paperwork that belonged to Jackson which showed corruption by many celebrities and officials. Unfortunately, all the evidence has been disposed of and removed from the internet. Also the way Max hacked into the system has been made more secure. Not only are they up against that but the media is determined to discredit Martha saying she should not be free even though she was proven totally innocent.

Isaac is subjected to the whole voting for justice and along with his supporters come up against the whole Guilty/Black or Not Guilty/White, there is no grey in between. Even though Isaac only shot his father because Jackson was putting the young woman he loved in danger. Jackson would have killed Martha, had Isaac not shot him. But as the TV programmers promote their show as an eye for an eye no one seems to want to hear the reasons behind Isaac's actions. In fact, the TV programme became so popular in the first book of this series, that there is both a daytime and nighttime edition.

I feel like its two steps forward, then one step back for those helping Martha. They have to be extremely careful as they are being watched and anything that could be classed as or turned into a possible crime is! At times in the book Martha and her group feel like the whole world is against them, and I certainly felt that way when reading the book. They do have some mystery helpers a couple of times in the book.

Of course there are still the 'haves' and 'have nots'. The have not's live in the Rises where Martha comes from and the haves live in the large posh houses such as the one Isaac comes from. There is still the injustice that not everyone can afford to vote, though the Prime Minister has come up with the idea of giving every person living in the Rises a mobile phone so that they can vote on the show that forms this societies legal system. I honestly had a similar reaction to a certain character in the book. How can those in the Rises vote, even if given a mobile phone it will still cost them money to vote. a mobile phone with no credit is no good! Then later in the book, you discover the actual real reason that the Prime Minister wants everyone to have a mobile phone.

The end of the book is good, not what I expected. I obviously can't say the ending as that would be a big spoiler. How the book ends it could be the final ending, but personally I think there is so much potential for a spin off series maybe, or a continuation of this series where those characters still alive could form some sort of rebellion against the black and white law rulings on TV. The other small thing that irritated me a little was the Prime Minister's surname being Rennard, as I was watching the Grimm series on TV and one of the characters in that has the surname Rennard. I know, total weird coincidence, but every time I thought of the Prime Minister I thought of the character in Grimm too. The strange thing is I kind of have a dislike for both characters.

My favourite character in this book just has to be Mrs Lydia Barkova, the lady who lives next door to Martha in the Rises. The one with all the superstitions and sayings and has ended up being a substitute mother to Martha after her own mother was killed in a hit and run accident. I felt sorry for Mrs Barkova as it was her son, Oliver that was blamed for the hit and run. He was tried on the Death Is Justice TV show and found guilty and killed. Martha, Mrs Barklova and many people from the rises knew it wasn't Oliver but he was the one that the police and authorities wanted to pin it on. In fact we found out in Cell 7 that it was Jackson Paige who killed both Martha's mother and Isaac's mother. This man has quite literally gotten away with murder on numerous occasions.

The other character I ended up quite liking even though when you read the book yourselves you may not necessarily like her much to begin with was Sofia. She wasn't mentioned as much as some of the other characters were, but she does play an important part in this book and could become a more central character if there is a book three - which I hope there is. I want the society in Cell 7 and Day 7 to realise neither the old judicial system was right but that neither is the present one.

I totally loved every page of Cell 7, and I really enjoyed this one too. The beginning of the Day 7 felt a little slow paced for my taste, especially in comparison to Cell 7. Day 7 has the tension builds up more gradually. Once the tension built a little more I began to be pulled into the plot more. Day 7 gives a little more background on some of the other characters, such as TV presenter Joshua Decker. In fact his character did surprise me a little towards the end of the book.

My thoughts as I finished reading Day 7 were: Could there be a book three? Please tell me there's more to come from this dystopian/futuristic society? There's so much more, there has to be!