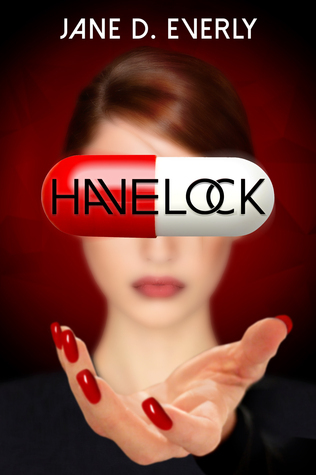 BLURB from Goodreads
Eliana Havelock is a female with no past, whose determination to bring down a Karachi arms dealer catches the attention of the British Secret Intelligence Service. MI-6 is currently fractured due to political upheaval with many of its covert programs dissolved or disbanded. When Eliana presents the opportunity to divert an international arms disaster, the head of MI-6 partners her with one of it’s best and brightest, the enigmatic, Connor Blackwell. But in a world of secrets and hidden agendas, who can Eliana trust? And what, or who, is Eliana really after?

REVIEW
Having read and enjoyed another "mystery, thriller" I fancied reading this one. The genre is somewhat newer to me and so I'd say I am still discovering authors/books I enjoy. The plot was making me ask questions quite early on in the book, for example, How does Eliana know of Treadik and can she stop him?

The cover shows a female who I'd say is Eliana, with her hand outstretched, showing her bright red nail polish. Above her hand is a large pill/tablet with the title of the book, Havelock across it.

This book is listed as being Adult, Contemporary, Mystery and Thriller, which I think describes the book well, and I agree with those genres.

I began reading this one quite some time ago and just couldn't get into it, so I filed it away to try again in the future. After reading a YA Mystery/Thriller, and a couple of Adult, Mystery, Thriller's so I decided to give this book another go.

The central character in this book is Eliana Havelock, who is described as having crystal blue eyes, a dark complexion. The book goes on to tell us, the reader, that Eliana is a strong independent woman, taught to be that way by her mother. Eliana's mother died whilst she was still young, yet her father never appeared to claim her. Which is why Eliana is looking for her father, she wants answers. Currently Eliana is following the drugs trade and we meet her whilst she is being held captive by those she had been watching. When attacked by one of the men, Eliana manages to cut his face as retaliation, which angers her captor even more. The man and Eliana continue fighting with Eliana using the man's overconfidence and manages to get hold of the mans own gun and shoot him with it! So we now know that Eliana is one tough cookie, who can fight her own battles. Eliana does not enjoy killing for the sake of it, she views it merely as a case of survival of the fittest. It's whilst she is assessing her own injuries that the door to the room she is in is kicked in and in swarm two men in combat gear, and another rather attractive looking guy. She quickly assess the new situation she finds herself in. I really enjoyed reading about Eliana, her character and the people she comes into contact with, within the book.
The other character I read most about in the book was Jeremy Lampert. To say he is the opposite of Eliana's character is an understatement. Jeremy is a 39 year old male married to a woman who loves sending much more money than they have coming in. This man can see no way out of this debt and no light at the end of the tunnel for his life, private or business work life. Jeremy married his wife Vanessa when they were very young, they have three children. Their eldest Evie is in a rehab centre in South Florida. To be totally honest I found Jeremy a little irritating...I wanted to physically shake him to wake him up and break him out of his monotonous life that he is seemingly just plodding along in. One minnute Jeremy is doing the daily drudge of going to work, goes to the bathroom and recives a phonecall from his wife. . . then the next minute he is once again driving in his car and see's it is 10.03am and he has some how lost the last 45 minutes of his life/day. Then Jeremy notices blood on his hands and car steering wheel....he then hears his name on the car radio, saying that there is a city wide hunt out for him, it's believed that he is guilty of being part of an assassination plot! I read further on where Eliana is in contact with and then soon working in conjunction with MI6.

I felt like there were too many slower paced parts in the book for my reading taste and I became more and more irritated to a point I was avoiding reading! It was then that I decided I should finally DNF (Did Not Finish) this book. I don't know if it's just this specific book, it characters or slower plot that made it so I couldn't get along with, or the fact that the book is in a genre I do not read a lot of.

I would say please don't let me put you off this book just because I didn't enjoy it, doesn't mean you won't. I think this book, it's plot and characters would have been more my dad's "cup of tea"/book type than mine. The thing is you don't learn anything if you don't try new genres and new authors, and like I stated at the beginning of this review, I had recently broadened the parameters of the genres I read. So I have actually read and thoroughly enjoyed other contemporary, mystery, thriller books.

To sum up this particular title was just not for me, hence my Did Not Finish.

This book has what I would class as a kick butt female character at the centre of the plot. I did like the characters of