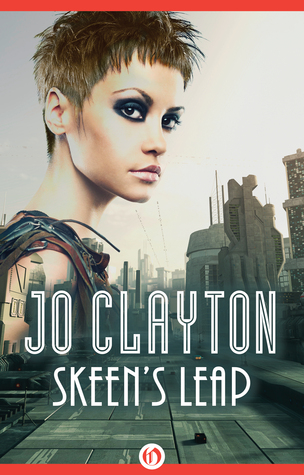 BLURB from Goodreads
Skeen is a bandit and a rogue, a master thief wanted throughout myriad solar systems for plundering the rare antiquities of countless alien civilizations while always keeping one rocket ship–length ahead of the intergalactic law. A “rooner” with a dark past, she now finds herself penniless and abandoned on a miserable backwater planet, at the tail end of a string of very bad luck, with no option except to follow unreliable rumors to a supposed fortune in gems hidden among ancient ruins. What she finds instead is a gateway into another world—and a universe of trouble. Now, trapped in a strange new reality with no way out, Skeen must find the key to reopening the portal, and that will entail making contact with the mysterious aliens who created the interdimensional passageway. But the enigmatic Ykx vanished eons ago, and finding representatives of a highly advanced and possibly extinct extraterrestrial race is not going to be easy for the silver-tongued lone wolf outlaw. It doesn’t help that Skeen’s entourage keeps expanding by leaps and bounds with unwanted hangers-on whose interference could end up damning her to an eternity in nowhere.

Jo Clayton, whose parents named her after Jo in Little Women, was born and raised in Modesto, California. She and her three sisters shared a room and took turns telling each other bedtime stories. One of her sisters noted that Jo's stories were the best, and often contained science fiction and fantasy elements.Clayton graduated from the University of California in 1963, Summa Cum Laude, and started teaching near Los Angeles.In 1969, after a religious experience, she moved to New Orleans, Louisiana, joining the teaching order Sisters of Mount Carmel as a novice. She left three years later, before taking final orders.During her time in New Orleans, Clayton sold sketches and paintings in Pioneer Square to supplement her income. After being robbed several times, Clayton moved to Portland, Oregon in 1983. She remained there for the rest of her life.Clayton was diagnosed with multiple myeloma in 1996. Jo continued to write during her year and a half in the hospital. She finished Drum Calls, the second book of the Drums of Chaos series, and was halfway through the third and final book when she lost her struggle with multiple myeloma in February, 1998.Literary executor Katherine Kerr made arrangements with established author Kevin Andrew Murphy to finish the third book of the Drums of Chaos series. It is now completed.

OTHER SERIES BY JO CLAYTON