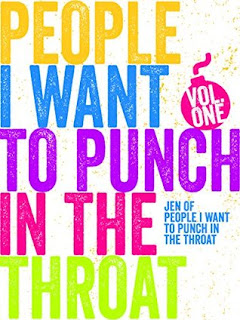 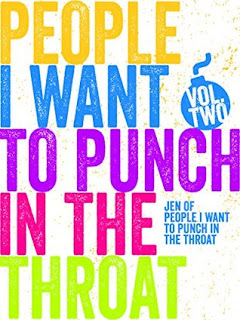 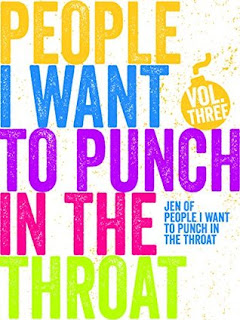 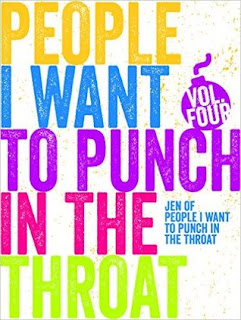 BLURB from Goodreads
These four volumes are collection of original essays that can not be found anywhere else from the New York Times best selling humorist, Jen Mann.
Each volume is different and you never know what you'll find. They are an assortment of Jen's childhood memories, stories about her family, and rants about everything that make her punchy. They are all told with her usual snarky take on them!

INITIAL THOUGHTS
After reading "Spending The Holidays With People I Want To Punch In The Throat" I kind of knew what to expect and was looking forward to more of Jen's unique brand of sarcasm, wit and humour. Also things haven't been great for the past few months so I sorely needed a read to make me smile and hoped it would make me laugh too!

MY REVIEW
I bought the four individual volumes of this collection from Amazon UK when they were just 99p each! The cover is loud and bright! The book is about simply what it says on the cover. It's full of tales about people, situations and their actions that irritate Jen! It's quite literally about people in situations that irk Jen and who she quite honestly says she would like "To Punch In The Throat" Let's ALL be totally honest hear we all know at least a couple of people we would love to "Punch In The Throat" or at the very least give a very honest "piece of our mind" to. Come one there HAS to be at least two, or maybe more?
Would the cover make me pick this one up from a bookstore shelf? Yes and being totally honest I adored a great "laugh out loud" book, so I regularly check the humour section both in-store and online!
So as the blurb informs us these novella/novelette length books are original story/essays that have not appeared anywhere else, either in book form or on Jen's brilliantly funny blog. If you haven't checked out her blog you really need to sign up to it and her newsletter.
So I want to tell you a little about these volumes but without revealing too much, so bear with me.
Each of the novella/novelettes have the same funny introduction and a little background about Jen at the beginning before she begins to tell the first amusing episode. I also like the sort of disclaimer of if you remember the story I am telling in a different way, then write your own book!
So the positives and negatives about these novella/novelette's. . . hmm negative they really aren't long enough I could read Jen's wit and sarcasm forever and never become bored.
In Volume One I adored the story of the arrival of a sibling for Jen, Her mother had convinced herself and Jen that the baby would be a little sister. . . and then the nearer the birth came the more her mum tried to backtrack to prepare Jen for the what she thought was the slim possibility it wasn't a girl. To say the young Jen milked this situation to the full is an understatement, demanding bribes such as new colouring books etc.
In Volume Two after the initial introduction to Jen, she tells us more about her relationship with her mother and the fact her mum drove to New York with her to help her get settles in her first ever flat. The way both Jen and her mum naively thought they would find the flat and a place to park to unload is told in such a cool and entertaining way. Her mother standing in a vacant space whilst Jen goes around the one way system again and finally parks and gets to unload her car . . . after the shopping trip of course!
I found it highly entertaining how it was "the 26yr old hubs to be" that had a 10pm curfew as though his parents thought Jen would lead him astray and they'd both be up to no good if they were together any later than 10pm!
In Volume Three, I loved Jen's take on how to handle unsolicited messages and mail from what I can only describe as "those social media perverts" we've all had them! "Hello pretty lady...etc" In Jen's case the "pervert" sent her a picture of his . . . . well . . .er . . .how can I put this? . . . Jen ends up nicknaming the "pervert" "Dick".
I was also really amused by the tale about a pool party Jen went to when she was a fifth grader. The references Jen makes to Laura Ingall's Wilder, and what she would do or not do in a certain situation were really hilarious. then there's the whole spin the bottle scenario too! What would Laura Ingall's Wilder have done? lol!
Finally in Volume Four, I admit to beginning to read this one with an equal mixture of sorrow and glee. Sorrow as I was thinking what on earth will I read next as good as this? and with glee as I couldn't read the funny tales quick enough. I am definitely looking up other titles by Jen and putting them on my Must Read Wishlist!
If you are feeling a bit down and fed up then you should. . . no not should you really need to read these books! and don't forget to subscribe to the Newsletter for more laughs too!

FINAL THOUGHTS
Jen really does seem to know exactly what the "female population", be it girlfriend, wife or mother, really hates about the different scenario's she discusses. After reading these novella/novelettes I have to admit to having a very similar, crazy wit/sense of humour to Jen. She actually goes ahead and say's things in this book that the "female population" have been dying to say themselves!
If you need cheering up, a quick fun read, or you are in a reading slump....try these novella/novelettes you really will not regret reading them! And at the 99p each I paid they are well worth the money!