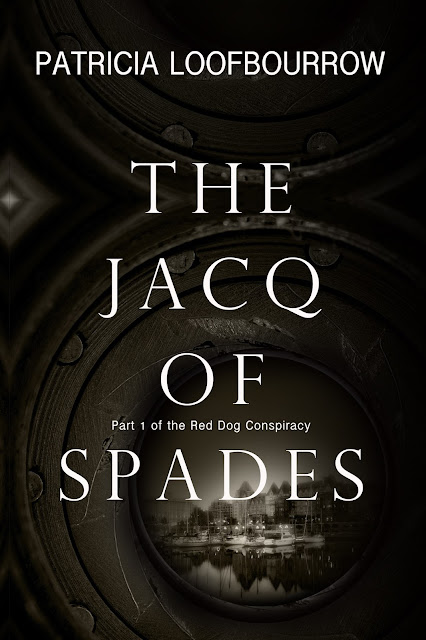 BLURB from Goodreads
The once-beautiful domed neo-Victorian city of Bridges is split between four crime families in an uneasy cease-fire. Social disparity increasing and its steam-driven infrastructure failing, a new faction is on the rise: the Red Dogs.Jacqueline Spadros has a dream life: a wealthy husband, a powerful family. But her life is not what it seems. Kidnapped from her mother's brothel and forced to marry, the murder of her best friend Air ten years before haunts her nightmares. She finds moments of freedom in a small-time private eye business, which she hides in fear of her sadistic father-in-law.Air's little brother disappears off his back porch and the Red Dogs are framed for it. With the help of a mysterious gentleman investigator hired by the Red Dogs to learn the truth, Jacqui pushes her abilities to their limits in hope of rescuing the child before the kidnapper disposes of him.

What is your name, where were you born and where do you live now?
Patricia Loofbourrow. Born: southern California; Live: central Oklahoma

Did you always want to be a writer? If not what did you want to be?
When I was a kid I wanted to be an archaeologist. I loved dinosaurs!

What is the name of your latest book, and if you had to summarise it in less than 20 words what would you say?
My book is called The Jacq of Spades: In a domed neo-Victorian city split between four crime families, a female private eye searches for a missing child.

Who is your publisher? or do you self publish?
I'm self-publishing

What can we expect from you in the future?   ie More books of the same genre? Books of a different genre?   Do you have plans for a new book? Is this book part of a series?
The Jacq of Spades is the first in a series named the Red Dog Conspiracy.

What genre would you place your books into?
Well, I'm calling the Red Dog Conspiracy steampunk neo-noir, but it's more neo-noir than steampunk. Basically, a gender-flipped hardboiled detective story in a far future neo-Victorian setting. With goggles, gears, automotons, ray cannon and all that stuff. ;)

What made you decide to write that genre of book?
It seemed fun. I've written science fiction for a long time, and this combination of genres seemed new and interesting.

If you had to choose to be one of your characters in your book/books which would you be? and why?
I would love to be Anna Goren. She's an apothecary, and loves to investigate new substances that my main character Jacqui brings in for her. She pretty much does whatever she likes all day.

How long have you been writing?, and who or what inspired you to write?
I've been writing since I was a teenager. Back then it was mostly angst-inspired, but now I have so many ideas I just go with the ones that excite me most.

Where do you get your book plot ideas from?What/Who is your inspiration?
They just come to me.

Do you have a certain routine you have for writing? ie You listen to music, sit in a certain chair?
I sit at my desk in front of my computer. Nothing fancy.

Do you have anybody read your books and give you reviews before you officially release them? ie. Your partner, children, friends, reviewers you know?
Of course!

Do you gift books to readers to do reviews?
Sure.

Would you ever ask a reviewer to change their review if it was not all positive about your book/books?
No. There are only two appropriate reactions to someone taking their time to review your book: 1) I don't understand, can you explain? and 2) Thank you.
If you can't take the heat, don't publish a book.

How do you come up with the Title and Cover Designs for your book/books?Who designed the Cover of your books?
The title just came to me. My cover designer is Anita B. Carroll of race-point.com

Do you choose a title first, or write the book then choose the title?
I need a title very early in the book creation process, for the most part, in order to be able to write. The title is really important to me for some reason.

How do you come up with characters names and place names in your books?
Names are highly dependent on culture, usually the dominant religion. (think of the thousands of people named Mary, Elizabeth, James, John, Peter, etc. which come from the Bible) So I decide the culture first, then the names are easy.
This book series has a culture and religion based on playing cards, so many people have names related to cards or card games.

Are character names and place names decided after there creation? or do you pick a character/place name and then invent them?
It depends. In this series, I knew many of the names first.

Do you decide on character traits (ie shy, quiet, tomboy girl) before writing the whole book or as you go along?
As I go along for the most part, although I know what my main characters are like before I begin.

Do you basic plot/plan for your book, before you actually begin writing it out? Or do you let the writing flow and see where it takes the story?
A little of both.

What do you do to unwind and relax? Do you have a hobby?
I sew (mostly costumes), knit, spin, read, garden, hike and like to make things. I also like watching stuff on Netflix.

Are there any hidden messages or morals contained in your books? (Morals as in like Aesops Fables type of "The moral of this story is..")
Ugh, no. I hate books like that.

Which format of book do you prefer, ebook, hardback, or paperback?
Paperback and Kindle

Do you think ebooks will ever totally replace printed books?
No. They meet different needs.

Do you have a favourite genre of book?
Military SF

What do you think about book trailers?
I've only seen a few but they're fun. I made one recently and enjoyed the process.

Do you or would you ever use a pen name?
I do, but I'm not telling it here.