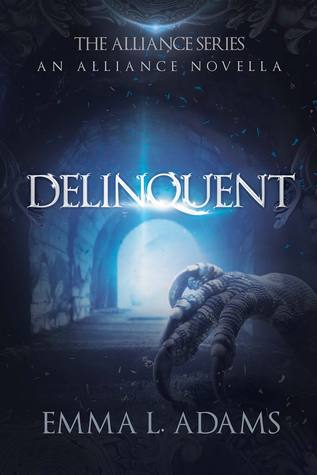 BLURB from Goodreads
Nineteen-year-old Kay Walker seems to have it all, including an assured future with the Alliance after he graduates from the prestigious Academy. But when he and his friends discover the lure of the Passages, the place between the worlds where monsters hide, they’re caught up in a contest with rival student Aric - which soon escalates into a deadly game.A perfect life hides lies, and Kay becomes a target for alluring yet deadly magic he has no way of understanding. Magic is a force on its own, and on no one’s side…

INITIAL THOUGHTS
As I had already read Bk#1 in the Series which is called Adamant and really enjoyed that one, I wanted to read the prequel but was hesitant as to whether I would disappointed to have not read the books in chronological order. So I approached reading this one with mixed feelings.

MY REVIEW
I can't honestly remember whether I downloaded this one for free from amazon or if the author kindly gifted me the book in exchange for my honest review.
The cover has a similar shade of blue hue to it as Adamant and the other books in the series that I have seen so far which I really like as you immediately know that they are of the same serious. The cover depicts one of the tunnels mentioned in the book. There is also a part of a large monster on the cover!
Would the cover make me pick the book up from a bookstore shelf? I think it would, and as I said the rest of the covers in the series have similar, complemented colour so are instantly recognisable as being of that series.
So to explain a little more about the relevance of the tunnels, that the strange creatures and monsters roam that the Alliance soldiers must protect civilisation from and maintain control over the tunnels and passages that hold the doorways to the other worlds. This novella is based in the years before the rest of the series before the characters have begun their jobs after finishing college. The novella introduces the reader to Kay, and some of his friends who are still quite young, probably still falsely confident and think they are already equipped and able to take on the monsters in the tunnels to protect their city. They are still quite naive, and need to learn to follow orders as well as hone their fighting and defense skills before they can successfully defend anyone or anything from the awful things that live and roam around in the tunnels. You learn a little more background into the relationship and the rivalry between Kay and Aric.
I'm not wholly sure of how to explain how I felt reading this book other than to say I had a feeling of de-ja-vu as if I already knew the information in this book, kind of almost as if I had read the book and was re-reading it. I did still enjoy reading this novella though and recommend reading it. Especially if you are unsure if this genre or book is for you, its at a reasonable price for trying out a series.
So did I enjoy the novella?
Would I recommend the novella? It is a good read so yes I'd recommend reading it. Do you absolutely have to read it before reading Bk#1? No, I read this novella after reading Bk#1 Adamant and still enjoyed both the novella and the book. Would I want to read more in this series? Yes, as I have said above, I have read Adamant and do plan to read more of this series. Would I want to read more titles by this author? I would definitely take a closer look at anything written by this author.

FINAL THOUGHTS
Good to read more about Kay and learn his backstory. Enjoyable novella in it's own right.