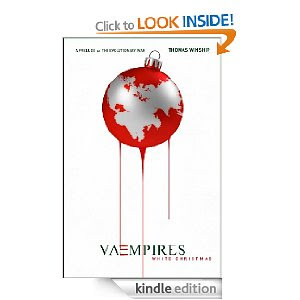 
It's almost Christmas. With the global holiday days away, the people of the world should be turning their attention toward celebrating peace and goodwill, but tension between humans, vampires, and væmpires is at an all-time high. Desperate for solutions, King Brant schedules a secret summit deep in North America's Northern Forest. Along with Queen Anne, Princess Cassandra, Daniel's family, and the human president and First Lady, the vampire leader seeks to reaffirm the ties between humans and vampires, while brainstorming ways to respond to the growing hostility among væmpires.Meanwhile, Daniel and Cassie's relationship is at an all-time low. The princess is still reeling from her breakup with Vielyn, and Daniel doesn't know what he should or shouldn't do to help. Little does he know that the summit will be flooded with surprises--guests, allegations, accusations, proposals, and even Christmas Eve revelations--but not all of the surprises will be pleasant.

To give the book its full title it is, Vaempires Christmas: White Christmas A Prelude To The Evolutionary War by Thomas Winship.

This book is a prelude to the larger, main book called Vaempires Revolution by Thomas Winship. I enjoyed this book, it allows you to get to know the characters that are also in the book Vaempires Revolution.I think you would say it sets the scene for what is about to happen. It gives you an idea of the possibilities of what may come.It is well written, in that once you begin to read this book you don't want to put it down until the end of it! I actual sat and read it in bed one evening, so its not a long initial introduction to the series. You learn the likes, loves and character traits, of Cassie and Daniel.
I really loved the cover too,being a white version as it is set at Christmas time. The world represented as a globe/bauble with blood dripping from it. The world is a different place as Vampires and Humans have finally learnt to co-exist in relative peace. The certain Vampires begin to mutate into a different species which is known as Vaempires. Vampires are strong, and have adapted well to the synthetic blood that the scientists have manufactured. Vaempires are even stronger and faster than Vampires, yet are ugly mutations they have extra claw/thumbs and they crave the blood of Vampires! The scientists are trying their best to adapt the synthetic blood so that Vaempires can drink and live on that however they are not being successful. Hence the secret meeting the Royal family and a head Dr/scientist are having....... things don't go as initially planned, can a peaceful resolution be accomplished? You will have to read the books to find out!
So did I enjoy this book? Yes, a great short prelude book. Did it make be want to read Vaempires Revolution? Yes I put the prelude book Vaempires Christmas down and immediately picked up Vaempires Revolution to read....and am I enjoying that? You'll find out in my review!
Would I recommend it? Yes even to those who are a little0 fed up of the Vampire genre should find this an interesting take on humans, Vampires and Vaempires!