BLOG TOUR - WOULD YOU RATHER BY ALLISON ASHLEY 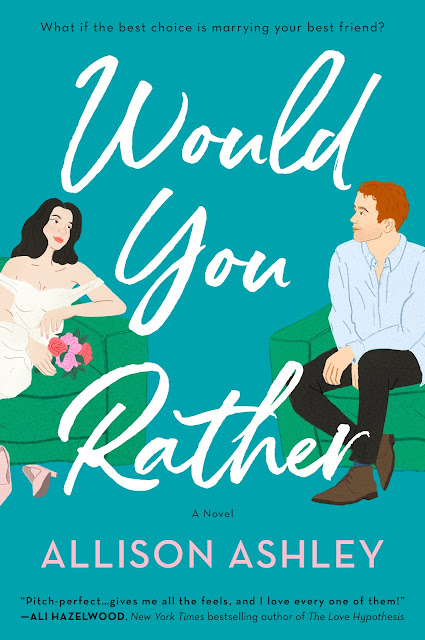 BLURB supplied by Harlequin Trade Publishing
Would you rather play it safe in the friend zone, or risk it all with a modern marriage of convenience?

Noah and Mia have always been best friends, and their friendship is the most important thing to them. Life is going great for Noah and he’s up for a promotion in a job he loves. But Mia’s life is on hold as she awaits a kidney transplant. She’s stuck in a dead-end job and, never wanting to be a burden, has sworn off all romance. So when the chance of a lifetime comes to go back to school and pursue her dream, it’s especially painful to pass up. She can’t quit her job or she’ll lose the medical insurance she so desperately needs.

To support her, Noah suggests they get married—in name only—so she can study full-time and still keep the insurance. It’s a risk to both of them, with jobs, health and hearts on the line, and they’ll need to convince suspicious coworkers and nosy roommates that they’re the real deal. But if they can let go of all the baggage holding them back, they might realize that they would rather be together forever.

EXCERPT
Mia Adrian stared at her phone screen, wondering what in the hell she’d just read.

What kind of question was that? She frowned and leaned one elbow on the arm of her chair before tapping out a one-handed response.

Noah: It’s a question. Would you rather receive daily animal facts or positive affirmations?

Noah: Both it is.

A banner appeared at the top of her screen, alerting her to a message from an unknown number.

When I breathe, I inhale confidence and exhale timidity.

She groaned and waited, hoping for some additional mes­sage that would give her instructions to opt out of whatever service he’d just signed her up for. Her gaze darted to her com­puter screen for a second, then back to the phone.

Would she seriously get something like this every day? How the hell was she supposed to stop them?

Elephants are the only animal that can’t jump.

She pressed a fist to her forehead.

Mia: I’m going to kill you.

Noah: Should have done it before you taped a banana under my desk. I’ve been wondering what the smell was for days.

She couldn’t help the laugh bubbling up, and glanced around to make sure no clients were around. Noah might be her best friend, but they teased each other at the office like elementary school rivals. She liked her job, but it was still work—and their games usually helped her get through until five o’clock.

This, though? This was her personal cell phone.

He’d taken it one step too far.

Mark my words, Noah Agnew. I’ll get you back for this.

Yet another chirp sounded, but this wasn’t a text message. It was the alert reminding her she needed to leave in fifteen minutes for her weekly infusion appointment.

She smiled at the thought that followed. Thursday meant a trip to the infusion center, but more importantly, it also meant chicken wings for dinner.

She closed her eyes and leaned back in her chair. What would it be today? Louisiana Rub? Lemon Pepper? Maybe she’d go wild and try the Mango Habanero.

They all sounded good—but which sounded best?

When it came to food—chicken wings in particular—Mia didn’t mess around.

Mia’s eyes popped open and she lurched to a sitting posi­tion. Noah stood on the other side of her desk, arms folded across his broad chest.

He had on the baby blue dress shirt. Blue always had been her favorite color on him—she’d told him so no less than fifty times. And yet he only wore the hue once a month, maybe not even that often.

She didn’t mention the ridiculous text messages. Best to let him think they didn’t bother her that much and get him back when he least expected it.

She flicked invisible lint from her black skirt. “It’s Thurs­day, is it not?”­

“It is. But even if it wasn’t, I’d still know. Nothing else puts that look on your face.”

“What look is that, exactly?”

He slid his hands into his pockets. “Pure, unadulterated longing. I’ve never seen anything like it.”

“Only every Thursday for the last nine years.” She leaned forward and dropped her elbows to the desk. “It’s your fault, you know. You’re the one who introduced me to them.”

Noah reached out and moved her nameplate several inches to the left. It drove her crazy.

No matter, she’d rearrange the items on his desk tomorrow morning before he came in.

“I didn’t know I was creating a monster.”

Mia laughed. “Too late for hindsight. Want me to bring some over tonight?”

She didn’t have to ask what flavor he wanted. Noah was as consistent as her doctor’s appointments. When he found something he liked, he stuck with it. Long ago she’d noticed he usually ordered something he’d had before when they went out to eat, and once asked him why he never branched out.

“What if it’s better?” she’d returned.

But he wouldn’t be swayed. Wasn’t worth the risk, he main­tained, and she’d let it go.

She made a mental note to add a ten piece of plain wings to her order tonight, and swiveled aimlessly in her chair. “How’s your day been?”

“Boring. Full of client meetings, but you know that.”

“If not, I’d be the world’s worst administrative assistant.

Speaking of meetings, you’ve got one more in—” she checked her watch “—ten minutes.”

“Right.” He put his palm flat on the desk and leaned in a little. His eyes brightened with excitement. “So I had lunch with my dad today.”

She smiled, ignoring the pang of jealousy at his casual men­tion of spending time with his dad. There was a time she and her parents got together for regular meals, too. Now, she couldn’t even remember the last time. “Yeah?”

“He’s going to announce his plans to retire. This week, probably.”

They’d been expecting it. Mr. Agnew had been dropping hints about retiring for the last three years. Mia didn’t blame him—he was in his sixties and had built an impressive ar­chitecture firm of fifty employees that had become known around Denver for modern, sustainable designs. He’d earned a break.

“Yep. Said the principals would look to promote one of the associates after he left.”

When Mia had started this job many years ago, it had taken her a while to learn the titles and hierarchy structure of archi­tects at the firm. CEO, principal, associate, architect, intern…but eventually she’d gotten it straight.

Mia rubbed her hands together. “Which means a junior principal position will open up, and it will have your name on it.”

He shrugged. “Maybe. I don’t want them to pick me just because I’m the founder’s son.”

She snorted. “Son or not, you’re the best candidate. No contest.”

“Thanks,” he said, chewing on his lower lip. “I’d love the opportunity. And I know it would make my dad proud.”

He ran a hand through his hair, leaving an errant lock stick­ing straight up in the back.

“Noah,” Mia scolded. She stood and beckoned him to lean over. He obeyed and she smoothed his hair down, a ritual they performed at least twice a week. “Better.”

“Thanks.” He turned toward his office. “You’d better get out of here.”

“I will as soon as your three o’clock arrives.”

He started down the hall to his office just as Julia and David, both architects like Noah, came from the opposite direction.

Julia paused and flashed him a smile. “Hey, Noah.”

He offered a polite greeting but kept moving, and Mia scowled at his back. No matter how many times she brought it up, he always brushed off the suggestion Julia was inter­ested in him.

Julia, looking poised and elegant in a gray dress and heels, veered off into the break room while David turned to where Mia sat. “I can’t find the Trodeau file.”

She blinked, disarmed by his clipped tone. She shouldn’t have been, though, because he always spoke to her like that. “Um, I thought I filed it last week. Did you check the black file cabinet?”

He looked at her like she’d just asked if he knew right from left. “Of course.”

“Oh. I’m sorry, I might have misplaced it,” Mia said, un­ease filling her stomach. Every time she messed up—which wasn’t often—it always seemed to involve David. The man thought she was a complete idiot. “I’ll find it.”

David just stood there and arched a sardonic brow.

Mia glanced to the side, then forced herself to regain eye contact. “I can’t do it right this minute, I’m about to leave—”

He didn’t reply and went back the way he’d come.

A subtle chime sounded, alerting Mia to a newcomer in the office. A young woman with long brown hair stepped into the foyer, and Mia stood.

“Good afternoon.” She smiled, trying her best to shake off the interaction with David.

The woman came forward. “Oh, hello. I’m Darcy Lane—I have an appointment?” It came out like a question.

“Yes, at three o’clock with Noah.” She should probably refer to Noah as Mr. Agnew to clients, but that had always been what she called Noah’s father. “I’ll just let him know you’re here. Can I get you anything? Water, coffee?” Serving and chatting with clients while they waited was one of Mia’s favorite parts of her job.

“I’m okay, thank you.” The woman sat in the chair farthest from Mia and pulled out her cell phone.

Guess she wouldn’t be one of the chatty ones, but that was probably best since Mia had to leave, anyway. She picked up her desk phone and hit number one on her speed dial.

“Yep. Should I set her up in the conference room?”

“Not yet. I need a couple of minutes to get her stuff to­gether. I’ll come get her when I’m ready, you need to head out.”

“You will be if you don’t leave now.”

“Okay, okay. See you tonight.” She hung up and locked her computer screen. Just as she was about to turn to the woman, she heard Noah’s voice and looked up to see his head poke around the corner.

“Darcy? I’m Noah. I’m just finishing something up, and I’ll be with you in a few minutes.”

The woman seemed stunned for a second as she looked at Noah, blinking several times. “Um, sure. Yes, that’s fine. I know I’m a little early.”

Mia smiled to herself. The woman had no idea how much Noah appreciated that. Tardiness drove him crazy.

“I look forward to our meeting.” Noah’s expression was polite and businesslike, and he ducked back into his office.

Mia forwarded her phone to the office manager and gath­ered her purse. She went around the desk and stopped in front of Darcy. “I have to head out for an appointment, are you sure there’s nothing you need before I go?”

Darcy’s cheeks were flushed. “No, thank you.”

This wasn’t the first time a woman had become flustered around Noah. The firm did mostly commercial design, and the majority of their clients were men. But occasionally women came through, and they’d had several female interns. It was quite clear the effect Noah had on women, even if the man himself was oblivious.

Despite their long-standing friendship, Mia could still admit her best friend was hot.

Really hot.
ABOUT THE AUTHOR 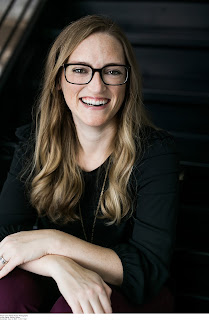