REVIEW - I HOLD YOUR HEART BY KAREN GREGORY 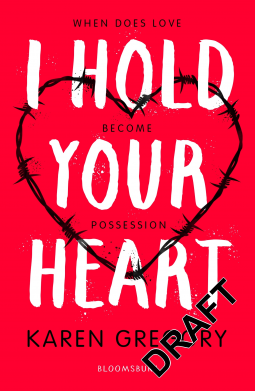 BLURB from Goodreads
'You make me feel like there's something good in the world I can hold on to,' Aaron says. He kisses me again, draws me so close it's almost hard to breathe. 'I love you, Gem. And I promise I'll hold your heart forever.'When Gemma meets Aaron, she feels truly seen for the first time. Their love story is the intense kind. The written-in-the-stars, excluding-all-others kind. The kind you write songs about.But little by little their relationship takes over Gemma's life. What happens when being seen becomes being watched, and care becomes control?Told in both Gemma's and Aaron's words, this is a raw, moving exploration of gaslighting in teenage relationships that skewers our ideas of what love looks like.

It was the cover that first attracted me to this book, which is ironic when it is actually labelled as being a “draft cover”. I actually like this cover and when you have completed reading the book, you know it does really fit it well. Its main colour is red which is associated with love & passion. Then there’s the barbed wire in a heart shape, which beautifully represents what the relationship between Gemma and Aaron becomes. The byline of "When Does Love Become Possession"....this also describes what Gemma and Aarons relationship comes.

The book is basically begins as a boy meets girl, the whole too and fro, of asking for a date and so on. Everything is fine to begin with, however all that soon changes.

We meet Gemma at the beginning of the book, a young girl who loves playing her guitar, writing songs, she works at the local beach café with best friend Esi and is part of a loving family. As part of this loving family she supports her younger brother Michael in his hopes for becoming a professional footballer by attending all his home games, her rather football obsessed father usually attends the away games too. Gemma has a best friend is Esi, but also has other friends like Cal who shares her love of music. Then there’s Phoebe, Beth and Rachael who she also hangs out with at college. It’s the first year Gemma and Esi have not had exactly the same classes with each other. Its because they have made different A level subjects. At least they can all meet up in the refectory at lunch time.

Aaron is a couple of years older than Gemma which makes him all the more exciting as it means he has a car so can give her lifts to and from college. Aaron stays in a flat with his dad, though his dad is around at his new girlfriend’s house more than at the flat. He used to live in London with his mum. So, Aaron is alone quite a lot with no company other than his golden Labrador, Moonshine. It soon becomes apparent from little things Aaron says that he has been hurt in a previous relationship. Aaron keeps mentioning his ex Cherine and how she betrayed and cheated on him.

It is one of Gemma’s friends that shows her the music competition called “From Nashville With Love”. The makers of the show want to discover the UK’s best country singers. The prize is £10,000-worth of promotion, time in a recording studio, the chance to sing in front of all the major record labels, and what Gemma considers the best part of the prize, which is, a year’s mentoring from The Greenwoods! Who are Gemma’s favourite country singers. The competition has three rounds, Auditions, Regional Finals, Then the winners from the twelve regions go on to a televised national final to find the ultimate winners! Gemma decides to enter and puts her everything into writing the songs and as Cal often sings along when Gemma plays her music, he becomes the perfect partner to enter the competition with.

As the relationship develops between Aaron and Gemma he starts turning up at the café when she is working. Then he starts making little comments how he doesn’t understand why Gemma isn’t attending Portsmouth College as that has a dedicated programme for performers etc. Gemma just explains it was too far for dad to take her and that she doesn’t mind and so on. Nevertheless, Aaron manages to acknowledge what Gemma is saying but puts his own spin on it. Saying her whole family seem to revolve around Michael, why does Gemma have to attend all of his home games? Why aren’t her parents supporting her in the music competition? Aaron also show extreme jealously when he sees the good friendship Gemma has with Cal. Gemma explains he is singing in the competition with her and they need to rehearse. Aaron then quietens but becomes reticent giving the impression of the “little boy lost” element he had that had originally attracted Gemma’s attention to him. Aaron has all the "right line" and seriously knows how to play on Gemma's emotions. Beginning with the whole "As You Wish" Princess Diaries references he uses when he is with her. Then that moves up to "I love You" and the rather poetic "I Hold You Heart" which turns out to be a spin on an old piece of poetry.

Gemma becomes more and more aware of what she is doing and whether Aaron would approve or not. Aaron manages to pressure Gemma into having sex, telling her she is beautiful, yet then giving her vouchers for a salon for waxing treatment. She doesn’t normally was but again feels compelled to use the vouchers so she doesn’t offend Aaron by not using them. The once on time or organised early person to the lesson/meeting, Gemma becomes tardy both at school and in her job. Her eagerness to rehearse her songs with Cal turn into excuse after excuse for not turning up. Even when she does attend lessons, she is often too tired to function and take part as she used to. Her friends try to explain to her what she is doing, cutting them off, to the point of not having time to have a chat about something important to Esi.

Things all come to a head and Gemma at age 17 decides to move out of her family home and live with Aaron. By this time, she has handed her notice in at the Beach Café as she is sick of talking to Esi. The reason she is “sick of” Esi is that she is the voice of reason. Telling Gemma she is cutting off all her friends just because she has a boyfriend. Aaron does a lot of underhand, controlling things like taking possession of Gemma’s mobile phone so “she can rest undisturbed”. By doing this he can edit and delete any messages, text or voicemail that Gemma’s family or friends send her. Aaron has his own idea of what Gemma should be like, what she should be doing as well as what she wears etc. It comes to the point that without Aaron, Gemma simply cannot function on any level. The relationship becomes more and more claustrophobic until Gemma has to leave the flat and goes walking, even contemplating suicide as a way out. Gemma has sacrificed everything for Aaron.

I won't go into anymore details or what happens after Gemma's walk to "clear her head". Gemma has to ask herself some really difficult questions and answer them in a brutally honest way like, What does she have if she doesn't have him anymore? Where can she go? How can her life go on? and the classic What will people say?

This book is really well written, possibly by someone who has been through this kind of relationship or has done an abundance of research. The story is told from the point of views of Gemma and Aaron. To be honest I was a good partway through reading this book when I noticed the realistic and purely honest writing style reminded me of another book I had read some time ago which I guess would fall into a similar category or genre to this book. When I managed to remember the title of the book and looked it up was when I realised both books were by the same author. When choosing books to read I try not to be swayed to read books by a small range of authors which is why I don’t take much notice of the authors name when checking out my next books to read. Don’t get me wrong if I love an author, I will read more of their books but it won’t be the specific reason for choosing a certain book.

What an amazingly realistic honest depiction of how a controlling relationship begins, takes hold and progresses. It took me back and reminded me of a past relationship. I kind of wish I had had this book to read. Definitely thought provoking and a possibly great way to educate about such relationships. You feel like you are right there, like a fly on the wall watching the relationship of Gemma and Aaron.