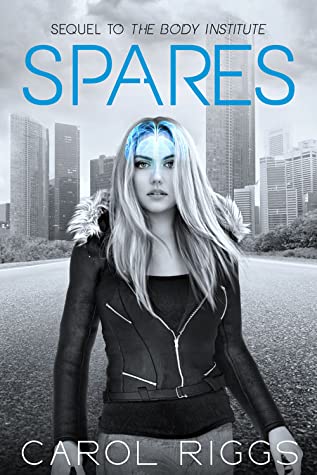 Title: Spares
Series: The Body Institute
Author: Carol Riggs
Genre: Sci-Fi, YA, Dystopian, Futuristic
Release Date: 3rd January 2021
BLURB from Goodreads
Sixteen-year-old Lexi Moore is obsessed with going to illegal junk food parties. This doesn’t exactly mesh well with her mother being a National Health Care councilwoman and staunch supporter of The Body Institute.The Institute’s method of losing weight—downloading the minds of workers into client bodies—has always been controversial. A widespread petition nearly shut it down. Lexi has also heard ugly claims about its supply of reusable, mind-stripped bodies called Spares. Her family’s longtime friend, Leo Behr, has lost his job at the Institute during the whistleblowing fallout, and the questionable Spares project is no longer in existence.Or… is it?When her mother hijacks Lexi’s body one night to replace her mind with a Reducer’s, Lexi awakens six weeks later to find herself thirteen pounds lighter. Not only that, her best friend has disappeared. Feeling betrayed and suspecting the Spares project has been revived, Lexi launches her own investigation into her friend’s whereabouts. With the help of a hot guy named Ajeet whom her BFF has targeted for romance, Lexi must expose the body-swapping corruption and rescue her friend—without being turned into a mindless shell herself.
Goodreads Link
PURCHASE LINKS
Amazon US
Amazon UK
REVIEW
As soon as I finished reading The Body Institute, I knew I wanted there to be a second book. As soon as I read that Spares was coming out, I knew it was a must read for me! In fact, I pre-ordered it to make 100% sure I received it as soon as it was available!! There was only one thing that worried me and that was would I still remember any necessary facts from book one, in order for book 2 to make sense. I needn’t have worried I easily slid back into this world. As a matter of fact, when I looked up how long it had been since I read book 1 I found it hard to believe it had been 6 years!!!

This book is centred around different characters than those at the centre of book 1, though the book 1 characters are mentioned within book 2. The main family featured heavily in othis book are the Moore family, which consist of 16 year old, Lexi Jo, her mother, Camille who works for the Body Institute and was rather instrumental in its policies. There’s also Chad Moore who is Lexi’s brother though only a few trusted people know this as it is his own brain map inside a “Spares” body his mother and Uncle bought. “Uncle” Leo is a close family friend who has been like a father to Chad & Lexi Jo since their father died. Uncle Leo has managed to slide out of the whole debacle of the “Spare bodies” and the attack on one of the Body Institutes buildings killing many bodies and leaving clients of the Body Institute with no body. Under the circumstance “Spares” from other branches of the Institute were given to those clients so they could continue their lives in a different body.

Lexi is seriously sick of her mother nagging her about her weight despite her only being 10 pounds over her ideal weight. Indeed, she half expects that if she doesn’t lose the weight soon, her mum may employ a reducer to go inside her body to lose the weight for her! However, this doesn’t stop her eagerly attending the “Craves”. Craves are illegal parties where you can eat whatever your host has managed to buy or bake even if that food is on the banned list. Some of the teenagers that hold these Craves have what is called a Virtcoin account which is an untraceable virtual account, that multiple users can add funds to, but only super trusted individuals can purchase items from 100% dependable sources. If you are caught it is a really serious offence. For Lexi to be caught or even associated with a crave would mean serious consequences for her and possibly her mother too. Lexi’s mum, Camille helped set up the laws and guidelines about weight and what is and isn’t suitable to eat. It is called the National Health Directive and their rules, and they banned certain 'unhealthy' foods/drinks. You are only allowed 2 of 'certain drinks' such as chocolate mocha's. If you are carrying over 20 extra pounds than deemed your perfect weight you are enrolled in a 'loaner-reducer' program at The Body Institute. Knowing all this Lexi is still coerced, though admittedly it doesn’t take much to get her best friend Terese’s latest organised Crave. Terese wants Lexi to meet her latest crush, and all her other friends will be there too. The Crave goes well and Terese contacts Lexi later to tell her she is going on a date with Ajeet, and invites Lexi to go round to help choose her outfit. Unfortunately, its whilst at Terese’s home that Camille Moore walks in and catches her daughter eating contraband chocolate muffins! Lexi of course is expecting a punishment, yet even she doesn’t expect what her mother does to her with the help of her Uncle Leo!! When Lexi wakes up in her own bedroom feeling strange and see’s the calendar it is revealed that her mother has done the unthinkable….she has arranged for a reducer to be placed in Lexi’s body to ensure her daughter is in line with the National Health Directive Rules on weight and BMI index. When Lexi manages to finally contact one of her school friends the normally flirty, funny guy Finn that she realises there is something worse than what she has just been through. Finn tells her that Terese and her family have disappeared. Soon Lexi finds herself, Finn and Ajeet on an increasingly dangerous mission of finding Terese and her family. In order to find and hopefully rescue Terese, Ajeet and Lexi need to join a mission to gain access to a Body Institute storage facility to record evidence to take to those in power who can shut down the Body Institute. The only other people interested and crazy enough to try are Russell Alleger, who is the leader of the WHA, and Uncle Leo despises the man.

I loved Lexi as a character, and could identify with her as a teen (though I am well past being a teen now). I think my teenage heart fell for Finn a little in this book. I began liking Terese but by the end of the book I wasn’t so sure by the end. Maybe that’s just me, Id be interested to read what other readers think to her. The character I enjoyed “hating” was Uncle Leo. I wanted to hate Russell Alleger but I couldn’t help but have mixed feelings about him, sure his methods weren’t all black or white, he spends a lot of time in the murky grey area. I had a similar feeling towards Camille Moore, on one hand she loves her daughter and feels she is protecting her but on the other hand she organises for her own daughter’s body to be taken over by a reducer simply for her to adhere to the National Health Care Directive guidelines.

I loved the writing style the different abbreviations such as POI, Person Of Interest, in other words latest crush! The romantic flirtiness between the mixed group of friends. The usual boy likes girl as potential girlfriend but girl only sees him as a friend and Eeeew not a boyfriend! It is done so well. I adored Lexi as a character, she has a lot to come to terms with, such as all the things she learns about Uncle Leo. Then there’s the fact if she brings down the Body Institute where does it leave her mother? Even the worry of this doesn’t stop her from rushing headlong into danger to rescue her best friend Terese. Lexi also finds herself becoming more and more attracted to Ajeet, much too her consternation, how can she be searching for her friend and crushing on her friend’s boyfriend at the same time. She needs to stick to the “girl code”. Another thing that’s troubling her is that if there were no Spares she would have lost her older brother Chad when he, or rather his body died of cancer.
Things don’t always go to plan, with the more violent Herrites group almost ruining a mission the WHA group have planned.

My immediate thoughts upon finishing Spares were that though I had waited what felt like a really long time for this sequel but after reading it, I have to say it was worth waiting for!
Summing up, if there were any other books set in this world, I would certainly be putting them on my “must read list” I really enjoyed this book and could go on and on about it. I have tried to prevent revealing anything that is not already revealed in the blurb. If you read bk1 you will love this book, and if you haven’t read bk1 yet add it to your list. This book has a fantastic mix of teen angst, romance, lies, betrayal, and torn loyalties as well as the sci-fi, dystopian and futuristic elements to it too.