REVIEW - FOR THE LOVE OF AN OUTLAW - OUTLAW SHIFTERS BY T. S. JOYCE 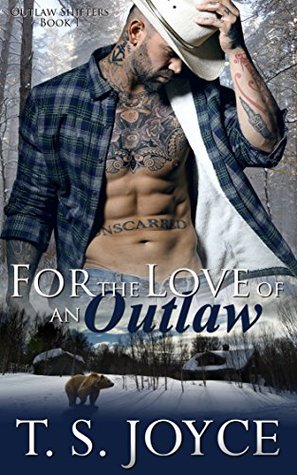 BLURB from Goodreads
Ava Dorset is back in town on the pleading of her brother. He’s calling in big favours for her to fix the finances of the local Two Claws Ranch, but she’s wary. She hasn’t been back to her small hometown in years because there’s something off about that place.

That and Trigger Massey, owner of the Two Claws Ranch, is too mysterious for his own good. There’s something wrong with that man. Too snarly, too moody, and every time he sets his eyes on her, he looks downright hungry. But the more she gets to know him, the more she thinks she might have been wrong about him all this time. Sure, he’s an outlaw, but there is something else he wrestles with. Something monstrous that he’s kept everyone protected from, and her respect for him grows by the day. She can’t afford to fall in love with an outlaw, and especially not one as dangerous as Trigger, but the longer she stays in Darby, Montana, the more she thinks she can handle his life… if she can only survive it...

Trigger’s had his eye on Ava since they were kids, but he made sure she never knew. That beautiful little spitfire was always going to find a big life away from their small town, and away from him. All he wants is to keep her safe, but she’s digging her claws into his ranch and his heart. But Ava doesn’t realise… the real danger to her life… is him!

So once again I felt myself yearning to read some shape shifter fiction along with feeling the need to read more of a book series than a lot of standalone books. Yet I wasn’t sure I wanted to read a simply werewolf/shifter book. I then remembered reading and enjoying A Very Outlaw Christmas I decided I wanted to read more of this series. It was then I discovered that A Very Out Law Christmas was in fact the second book of the Outlaw Shifter Series. I decided to still go ahead to read For The Love Of An Outlaw and just hoped I hadn’t already spoilt book by reading it in the wrong order.

I discovered that this books main characters were once again, Trigger Massey, Colton and Ava Dorset. I tried to discount/forget what I had already read in bk 2 and for the most part managed it. The cover of this book is very similar to that of Bk2 just a slight change in the male’s head/cowboy hat placement. I’d say the male on both covers has to be Trigger Massey.

In this book Colton has contacted his sister Ava and finally managed to get her to agree to come to the Two Claws ranch to help sort out its finances and its downward spiral. Ava tries every excuse she can think of for not going back to Darby, Montana. She had left straight after graduating aged 18 and had never been back since and that’s how she liked it! Ava even tells her brother that his childhood friend unnerves her, but Colt is not taking any excuse. He reminds her Trigger is his best friend and manages to beg, pester, call in all favours she owes him until Ava finally agrees to come back for two weeks only!

Ava didn’t have the very best life in Darby Montana, in fact it was her brother Colton that helped her get through school and kept her on the straight and narrow and yes she was grateful to him. Unbeknownst to Ava, her brother best friend had tried his best and had in fact secretly helped Colton whenever he could.

When Ava sees her brother’s scar’s he has some explaining to do. They soon soften somewhat towards each other. Ava is still annoyed with her brother about having to come back to what was once the place she called home. Ava is certainly irritated by the fact she has to stay in Triggers home as he has a spare bedroom. Colton has his own small one bedroomed home, so says its common sense for her to stay at Triggers home.

Being around the stubborn, awkward Trigger irritates Ava immensely to begin with. The fact the town doesn’t want Trigger around anymore and are trying to bankrupt him to get rid of him infuriates Ava whilst she is attempting to settle all his outstanding bills.

Slowly Ava remembers the “good times” she had in Darby and realises how hard it must have been for her brother to take on the responsibility of raising and providing for her. Also, as time goes on Trigger and Ava seem to mellow towards each other. Small things are revealed, like the way when Colton was working nights, Trigger would sneak in and stay in the flat hidden yet keeping watch over Ava. Slowly but surely the “chemistry” between Trigger and Ava grows and grows. There’s danger being with a shifter and Trigger is determined that Ava should know what she is getting into. It is only when someone calls Trigger and Colton “her boys” that Ava realises, they are hers and she wants to protect what’s hers and stay with them.

I really enjoyed reading this book, of course I adored the characters of Ava, Trigger and Colton and their relationships with each other. I love the feelings in the centre of shapeshifter books around the concept of “pack” and “family”. The pack in this book is a fairly small one but I am sure it will grow as the series goes on. As Colton does not yet have a mate and I would hope that the family part of the pack will increase too.

What more can I say another fantastic instalment in a potentially brilliant shape-shifter series. I anticipate great things for this series and definitely want to read more of it soon.