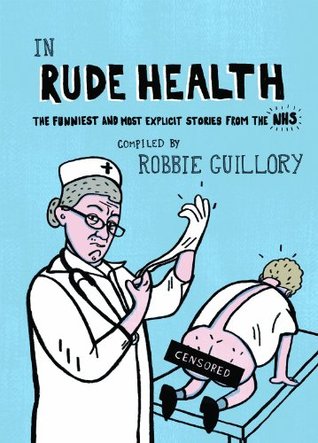 BLURB from Goodreads
From the man with a device lodged far inside his body whose batteries refuse to run out to a woman with a plunger super-glued to her vagina, In Rude Health recounts real life tales from the coal face of the NHS. From doctors, nurses, physiotherapists, psychiatrists and dentists come a range of eye-popping, side-splitting acts of misadventure that have had the medical profession weeping into their face masks as they attended to members of the great British public in their hour of need. From the publishers of UK Booksellers Association Top 5 Christmas book, 101 Uses of a Dead Kindle, In Rude Health is a riotous account of the weird, the warped and the whacky ways we end up in the hands of the medical profession.

REVIEW
So, approaching reading this book I was in a bit of a reading block. I just couldn’t decide what to read. Then when I did try to read a book or two I ended up not being able to get into them. I came to the conclusion that I needed to read something different to my usual genres to snap me out of the reading block. So I went on Amazon.co.uk and looked under humour and found this book.

This book contains the weird and wonderful predicaments that people get themselves into and end up having to ask for medical help to get themselves out of. I would imagine there were lots of red faces when some of these incidents happened.

I decided to share just one of the stories in the book that isn’t an 18+ rated!
It is titled as “The Eyes Have It” – A drunken male staggers into a hospital in Manchester, complaining that no matter how he tried he could not get his contact lenses out. Apparently, the contact lenses would come half the way out but then somehow snap back in! A nurse attempted to remove the contact lenses and failed so the Dr was called in, who examined the man’s eyes and found out the man did not have any contact lenses in!!

My immediate thoughts upon finishing reading the book was that it is a great selection of short stories put together in a book that ended up being a funny fast paced read. I would say the book is definitely 18+ due to certain stories that are involving "private parts" both Male & female.


To sum up I would say this is a great book to read on a short journey or during break-time at work.