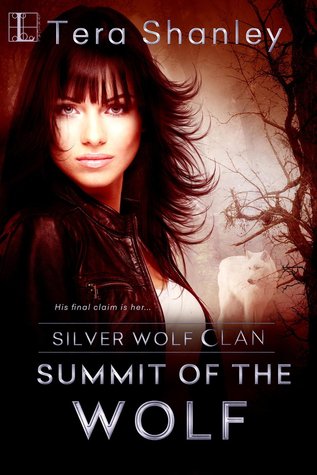 BLURB from Goodreads
An Unbreakable BondMorgan Carter is a claimed werewolf. Only her mate, Greyson Crawford, has the right to protect her, and to love her. But that hasn’t stopped rival packs from challenging Greyson’s claim. Morgan is the last silver wolf—the only female with the ability to produce werewolf offspring, which means there are many who would defy pack law to make her their own.An Unstoppable EvilWhen war comes to the Silver Wolf Clan on the eve of The Summit, Morgan and Greyson have no choice but to fight for their kind. With the arrival of an ancient enemy, the two realize that the war has only just begun, and to survive the greatest threat they have ever faced, they must learn to trust each other again…

REVIEW
I had mixed feelings about reading this book because on one hand, I wanted to know more and read more about the characters but I knew there were no more books available after this one, so on the other hand, I kind of didn't want to read it as I didn't want the series to come to an end either.


This cover is dominated by Morgan both in her human form in the foreground and in her Silver Wolf form in the background. The font style and placement of the book title, series name and author name are all in the same style as the rest of the series which makes the series really cohesive. I bet they look brilliant side by side on o book shelf! All the individual book covers would encourage me to pick them up in a book store to learn more about them so I'd say they certainly do their job well.

As I have said with the other titles in the series the genres I have seen listed for this book series are Paranormal, Fantasy, Shapeshifter, Werewolves, Romance which totally fit this book and book series. I also noticed that someone has added Urban Fantasy too which I also agree with. This really is a great shifter series that contains everything from the claiming and mate bonding to pack dynamics and how challenges are dealt with along with how misbehavior/wrong doing within packs are dealt with. Also the more unusual aspects of two packs co-existing close to each other as Dean and Grey are doing in this series.

Once again I really, really enjoyed reading this book, I just truly hope it wasn't the last in the series. I still have so many questions about the futures of the characters in this series. I enjoyed meeting the other packs when Grey's and Dean's packs both went to the Summit and shared accommodation. I found the scene description of the male wolves waiting in an airport so funny, all the pacing and these big tough males, two of them alpha's struggling with being round people and then being cooped up in an airplane together too. Poor Logan being teased about his love of gossip magazines.

A lot of the action and angst for Morgan happens at the Summit. Morgan even ends up feeling "alone" and distanced from her mate Grey. Grey tends to internalise things and has a just get on with it attitude. Whilst they are at the Summit it becomes apparent both Morgan and Grey are struggling with all the attention on them and their wolves are taking over more and more. In the end Morgan actually speaks to Grey about the fact she needs Grey as himself as well as his wolf. It is soon revealed at the Summit's annual meet that the elders and some of the wolf clans and alphas are quite archaic in their attitudes to women and particularly to Morgan and the possibilities that she may one day produce children so re-population the once thought extinct Silver Wolf Clan. It seems the elders also think they can have a say in what may happen to Lana in the future should she be turned, both Morgan and Grey insist that will be a choice for Lana to make not anyone else no matter how important they think she could be to the Silver Wolf Clan and it's re-population. Other major incidents in the Summit are the male fighting challenge....now I wonder who could enter and win that? There's also a female fighting challenge but no one ever enters that . . . could that all change this year? Would/Could Morgan be provoked enough to fight?

Favourite characters that have remained so throughout the series are both the main alpha's and their mates Grey & Morgan and Dean & Rachel. I absolutely adored the young teen character of Marissa, she gains so much confidence in both herself and in her new pack, so much so when two males give her unwanted attention and over step the mark she reports back to Grey whose wolf takes immediate action on Dean's advice and challenges the wolves in the fighting ring. Prior to the fights Marissa makes certain gestures at the males and is gleeful when Wolf doles out his own form of justice to them! By the end of this book I was warming up even more to the growing character of Lana too. She comes across as such a cutie yet seems so wise too when prompted to call Grey daddy to irritate other characters, she then ends up calling him daddy anyway with Morgan's blessing. Another totally adorable scene is when she growls when she is eating at the Summit's last night barbeque! Is she merely mimicking those around her or could her own inner wolf be rising to the surface?
We learn a little more about Dean's pack in this book. The fact that Wade the packs doctor is a more dominant wolf than he shows. The way Dean, Grey and Wade have land bordering each other and use all three properties in the regular runs together in wolf form. We see Brent find someone who he would potentially like as a mate but will she be interested when she hears of all the drama that goes on around Morgan, the Silver Wolf? I enjoyed their being more female shifters featured in this book and hope that the series continues and has more female wolves too.
I also enjoyed the "bad" trouble causing character of Alexis, when will she learn her lesson that she will not manage to come between Grey/Wolf & Morgan/Silver Wolf. Alexis once again tries every tactic she has at her disposal to the point of being reprimanded by various characters including her very own mate Jonathan. How does Jonathan put up with Alexis? Could Jonathan be trouble in the future for Grey & Morgan? At One point in the book something that Alexis says ends up in possible devastation for Grey & Morgan. . . . as for whether Alexis gets her wish you'll need to read the book! I couldn't possibly say but lets just say Alexis truly is a vindictive conniving bitch in this book and knows just how to use the elders expectations for the Silver Wolf Clan rebirth to her advantage!

I also want to find out more about the next chapter for both Dean and Grey's packs, with wolves wanting to pledge to Deans Pack and I'm looking forward to how things could change in Grey's Pack. There is a point in the book where things come to a head with Dean and Grey when Dean thinks more of his wolves may be wanting to transfer to Grey's pack. Is that the real case or is it merely a misunderstanding?

Once again I feel I could go on and on about this book and the series as a whole too but I shouldn't nor want to reveal everything. I just can't explain how great this series is, I'd say if you are a lover of shifter books they are a must read to add to your reading lists. If you love a great kick butt female character then these would be a good recommended read for you too. Other series and authors I would say comparable to the Silver Wolf clan by Tera Shanley are Kelley Armstrong's Women Of The Otherworld Series (which has shifters, witches and more!) Rachel Vincent's and her Shifter Series and her Menagerie Series (with a travelling menagerie of shapeshifters and more!) Amanda Carlson and both her Jessica McClain shifter's series (and for another kick butt female, but more mythology in genre, her Phoebe Meadows series). Back to great shifters there's Karina Espinosa's Mackenzie Grey Series, J.A. Belfield's Holloway Pack, Nikki Jefford's Wolf Hollow Series and Keri Armstrong's The Awakening.

My immediate thoughts upon finishing this book and series so far were, Oh wow amazing! Totally love this book and series! Please tell me there will be more Tera Shanley??? There is so much more this series and it's fantastic characters have left to give. There is the brief appearance of vampire Larius to be built upon along with whatever disaster or action the dragon plans to take against a Silver Wolf Clan being reborn. I'm also looking forward to Lana deciding on what she wants to do or become in the future along with young Marissa eventually being faced with choosing a mate, though I have my own thoughts on who she would/could possibly choose.