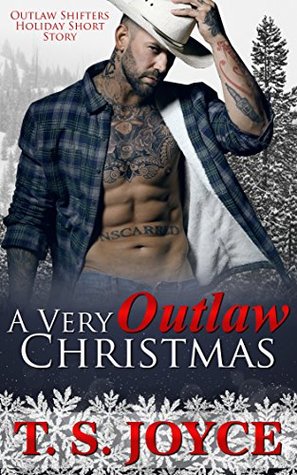 BLURB from Goodreads
Outlaw grizzly shifter, Trigger Massey, has been on the naughty list most of his life, but things are different now. He’s got a new mate, is in a race to save his ranch, and is the brand-new alpha of the Two Claws Clan. Add to that, his mate, Ava, has a serious problem with Christmas, and Trigger has his work cut out for him. This is his first Christmas as leader of his Clan, and he’s taken it as a personal challenge to make it perfect. The only problem? Ava never wanted perfect. Ava Dorset just needs to get through December, set up her business, save the ranch, and be the best mate she can be to Trigger. He’s a big brawler, who raises his fists first and asks questions later. They’re fresh out of a war with the local cougar clan and looking to stay on the straight-and-narrow until she can get their business off the ground, but the boys find trouble wherever they go and they’re demolishing her plans. All she needs to do is get their focus off the holiday, and back on saving the ranch, but the more Trigger works to get her holiday spirit back, the more she thinks perhaps December isn’t so bad.

REVIEW
I have read other titles by this author under a different name so decided to try this shape-shifter series. I decided to read this novella first are it had a Christmas theme running through it and it did say that it could be read as a standalone too. Only time will tell if I should have read For The Love Of The Outlaw first.

The cover has tatooed male on the cover wearing a cowboy hat, an opened plaid shirt and jeans. After reading the novella it is safe to say this cowboy is grizzly bear shifter Trigger Massey. As the series is called Outlaw Shifters the title alone would make me want to learn more about the book.

The genres I have found listed for this novella are Fantasy, Paranormal, Romance and shapeshifter, which I think all fit it very well.

So this book is centred on the Two Claws Clan, whose alpha is Trigger Massey, a large grizzly bear. Also part of the Clan is Trigger's mate and best friends younger sister Ava Dorset. The rest of the Clan is Colton Dorset, and ex-Darby Clan members Kurt and his 3 year old son Gunner.

The main gist of the novella is about Ava and her hatred of Christmas and anything Christmas related. Ava used to love Christmas when she was younger, it was the only time her dad seemed to care about anything, and did the usual Christmas Traditions with her. That was until one day he packed his car as full as possible with items he could sell to fund his gambling addiction. It was from that day that Ava realised how many of the traditions her dad did with her were actually mostly done by her older brother Colton.
When Colton reveals to Trigger that Ava now hates Christmas and why. Trigger decides he wants to rekindle Ava's love for Christmas, by making new traditions together. Ones they can repeat year after year.

To be honest I loved all the characters of the Two Claw Clan, from Trigger, the alpha that protects his pack. If anyone has anything to say/do to any of his pack, they have to get past/through him to do it. If they say anything out of line, as one male in this novella calls Ava "the breeder" they are dealt with swiftly and are in no doubt they should never do/say whatever offended ever again. In the case of the male calling Ava "the breeder", well he receives a swift, harsh, fast punch in the face from Trigger!

I adored the sweet relationship between Trigger and Ava. The way it was revealed Trigger had kind of watched over Ava from afar never believing anything would ever become of his love for her.

There's a great camaraderie within the Two Claw Clan, what with the kind of love/hate vibe Trigger and Colton have, as only two guys that have known each other for years can have. Then there's the sort of juvenile jokes etc that Colton also plays on Kurt and the three year Gunner. Even Ava obviously used to also being treat as one of the lads & one of the pack at times acts like "one of the lads". Ava is the only human within the Two Claw Clan at the moment. . . . Who knows what could happen in the future, as mate of the Alpha?

My immediate thoughts upon finishing the book were. . .When can I read the next one? and Is it out yet?

The answers to the above questions was that I can read Bk1 whenever I wish as I have bought it from Amazon already. The only thing that bothers me is I sort of didn't look at the numbers of the books and have managed to read Bk1.5 before Bk1!! Will it spoil my enjoyment of Bk1 when I read it? Only time will tell!

I really did enjoy meeting the Two Claw Clan and reading how Trigger and the rest of the guys try to coax Ava to enjoy Christmas once again, and start their very own traditions together. I look forward to reading more books in this series and discovering more about Trigger and his pack.