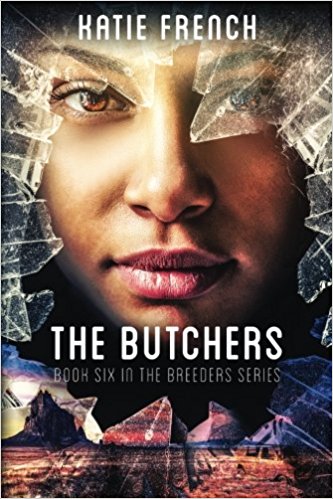 BLURB from Amazon
I’m not a mother. I never will be. But when my adopted daughter, Mo, turns sick, I’ll do anything to save her. That includes going back to the very people who want to use her to as a living science experiment. With Clay, Auntie, and Ethan at my side, I know we can save her. But when we come up against the most barbaric group we’ve ever encountered, all our lives are forfeit. Can I save Mo? Can I save anyone?

REVIEW
As soon as I realised that this book was available I knew I just had to read it as soon as possible, even though I'm feeling sad to think its the final book and the end of The Breeders Series.


The cover matches the rest in the newer covers series very well, meaning they'll look fantastic on a bookshelf! I'd say the face featured on this book is most likely one of the new characters we meet in the book. I would say it is a good likeness to the description of Desdemona, or Desi for short. A brilliant character!

For genres this book falls into I would say Sci-Fi, Dystopian, Fantasy and Post Apocalyptic with a little genetics thrown in too! I think it should appeal to a wide variety of people from teens upwards. I am definitely not in the YA/Teen category but I have absolutely loved reading this brilliant, brilliant series.

At the very beginning of the book there is a section that recaps what has happened to the characters so far which I really enjoyed. I had remembered the books quite well but a section to refresh your memory is really good and it certainly pulls you right back into the book which picks up straight after the ending of the last book.

The butchers begins with Riley trying to patiently teach Mo her letters but Mo then has some sort of fit or seizure. These seizures have been happening more and more often as well as lasting longer each time too. Everyone around Riley can clearly see that Mo is ill and possibly even dying but she refuses to accept the probability. Riley has been through a lot and having the possibility of ever having any children has had its emotional toll on her and she has become so attached to Mo as if the half human, half creature is her own daughter.
It is decided that they desperately need to get help for Mo even though it may be a dangerous journey. After a discussion they realise the only people that may have the facilities and medical supplies are Nessa Vandewater or Corra. So its a case of which is the lesser evil....they decide on Corra and that they'll escape with Mo when she is well again.
Whilst searching for fuel to enable them to travel to Corra, Riley, Clay and Ethan come across a fuel station that has been burnt out. They also discover a family tied up and burnt to death. This is the first inkling and distance connection they have with the new tough men who call themselves "The Butchers".  It is Ethan that finally finds some horses they presume belonged to the burnt family that they can use to get to Corra.

When they do contact Corra she agrees to help, keen to get her hands on Mo again but says she will only help if Clay stays away, she will not allow him into the bunker at all. So Clay and Auntie are directed to a "safe" place that is in an old fairground/theme park. It's here that Clay meets what he thinks is a young man possibly a bender. When Clay has to fight a couple of the Butchers scouts, it is the young male with a crossbow that helps him defeat them.

In the meantime knowing the Butchers Scouts are heading for Clay, Riley borrows a solar car and goes to help Clay and Auntie. Clay, Auntie and the mystery young make all go back to the bunker. Doc gives Riley some sort of injection supposedly to help her relax and sleep. It's whilst she is asleep that things go wrong. A member of her family group actually betrays her and it cuts her very deeply. It is Betsy who explains what has happened, when Riley finally wakes up.

There's so much going on in this book. Clay and Riley meet the hardest group of survivors they have ever met, The Butchers. The Butchers are a groups of heavily tattoed, bald men who are collecting women, girls and medical supplies and the people to use them. These men are brutal and there's no second chances with them. The Butchers live in what is described as a stone fortress. In an attempt to defeat them, Riley and Clay's group will have to infiltrate The Butchers and their home and attempt to overthrow their leader.

There is still a very taught tension between Clay and Doc. Doc is a bender who does look a lot like a girl but he wants to be treat as a male, and is in love with Riley. However Riley only has eyes for Clay. Her heart and soul are in love with Clay. Clay is the love of Riley's life, whereas Doc is her best friend. The two males do end up coming to some sort of truce in this book, where Doc does something that Riley finds hard to believe let alone forgive. Clay tries to look at things from Doc's point of view and does end up feeling a little empathy but he certainly is not giving up on his relationship with Riley to make Doc feel better. Though Clay does attempt to speak up on Doc's behalf a little when Riley refuses to speak to him.

Clay and Riley have to come face to face with Nessa, Clay's mum once again. Nessa isn't in great shape as she has had a visit by the butchers so all her female subjects have been taken away along with her equipment. Nessa has been badly injured but its the fact she seems even more unhinged than ever. So much so she wants to destroy all records of her work and if she can take some people down with her she will do that too.

Characters I loved were of course were Riley and Clay, but I also loved Auntie and Ethan. Ethan does a lot of growing up in this one. He really looks up tp Clay who continues to treat him like a younger brother yet is willing to teach him to fight, use guns etc whereas Riley seems, quite naturally to want to keep Ethan protected and safe. She doesn't want him to see all the horrors of the world they live in. Betsy is a bit of a surprise in this book, though she still speaks in rhyme and is always giving Clay those puppy dog eyes, she actually comes through and is a big help at one point in the book. People seem to disregard Betsy as "not all there" or "away with the fairies" but she actually listens much more than anyone thinks she does.

New characters I loved were Desdemona, another female who is as tough as Riley and can fight. Desdemona has never been in the Breeders program so doesn't have the ankh tattoo that Riley has. Desdemona joins in the fighting and is part of the group that infiltrate the butchers stone fortress in an attempt to rid the world of the butchers leader Barrage. At one point in the book Barrage shows how evil he is in his attempt to make Riley reveal the whereabouts of Mo. Barrage wants Mo so he can use her blood/DNA to find the formula that has made her mature faster in the hopes of using that to create himself a strong army. Barrage basically wants to rule whats left of the world.

I could seriously go on and on about this book but I don't want to spoil the reading experience for everyone. Lets just say this book is so super action packed. The Butcher's really keeps you at the edge of your seat with lots of nail biting scenes. There are also some poignant scenes that have you sniffling and reaching for the tissues, specifically a certain scene with Riley and Mo. There's lots of ends tied up in this book, but I would still love even more. We met some new characters in this book and it seems such a shame to be saying goodbye to them already.

I have honestly loved this series from the first word to the last! Now I need to find another fantastic dystopian/post apocalyptic series to read. I'm sure this series will remain one of my favourite ones that I will always recommend to fellow book lovers. This series is a must read!