REVIEW - HOW TO BE CHAMPION BY SARAH MILLICAN 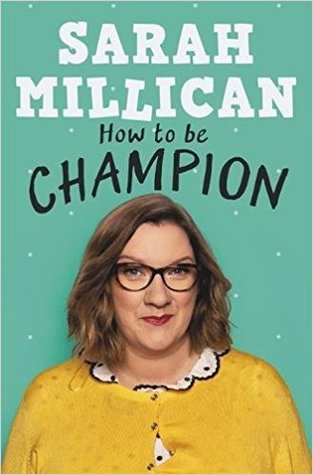 BLURB from Goodreads
Part autobiography, part self help, part confession, part celebration of being a common-or-garden woman, part collection of synonyms for nunny, Sarah Millican's debut book delves into her super normal life with daft stories, funny tales and proper advice on how to get past life's blips - like being good at school but not good at friends, the excitement of IBS and how to blossom post divorce.If you've ever worn glasses at the age of six, worn an off-the-shoulder gown with no confidence, been contacted by an old school bully, lived in your childhood bedroom in your thirties, been gloriously dumped in a Frankie and Benny's, cried so much you felt great, been for a romantic walk with a dog, worn leggings two days in a row even though they smelt of wee from a distance, then this is Your Book. If you haven't done those things but wish you had, This Is Your Book. If you just want to laugh on a train/sofa/toilet or under your desk at work, This Is Your Book.

REVIEW
I have watched Sarah Millican on a few different TV shows and one of her DVD's and found her quite funny. I also think she projects the fact she is a down to earth, normal person with everyday challenges both at work, with family and life. So as I find her quite relatable I wanted to read the blurb of this book which of course mentions different trials and tribulations from being of school age onward.

The cover features Sarah wearing a yellow/mustard cardigan with the buttons fastened wrong, and her blouse underneath the with collar half in, half out! This attire,pose, and expression on Sarah's face will make more sense as you read the book. The cover certainly did it's job and drew my eyes to it, then encouraged me to read the blurb etc and finally choose to read the book.

Sarah Milligan begins this book by taking you through her school years, explaining who she was as well as who she really wanted to be using witty, sometimes ironic tales. I was drawn in by the very first tale she tells and held to the end of the book.
As it says in the blurb this book really is part Autobiography and part self help. Along with some of the stories Sarah has added a little advice at the end of how either she dealt with the situation or could have dealt with the individual circumstances.

Sarah begins with explaining how life was for her as a youngster during the miners strike such as when the French Miners donated lots of toys for the children of the miners for Christmas. She also explains that they all had little badges saying that "Santa supports the Miners" too.
Another one of her tales is about the bomb disposal team having to be called out. Sarah's dad had returned to work just before all the miners returned to work and they received lots of threat etc so hence why the suspect package warranted the bomb disposal team to come out to check the mystery parcel. I won't reveal anymore. . . you'll have to read the book!
One tale I could identify with was Sarah talking about her mam being a hairdresser and she permed her hair and ... well it wasn't the exact perm result Sarah had wanted. (For me it was my Auntie that was the hairdresser, who lived about an hour away but we visited fairly regularly but I still cringe when I think about "having my fringe cut to last until the next visit").

Sarah tells us about the six men she has loved, Shakin' Stevens (I must be a similar age group to Sarah as I also remember dancing along to his music and later calling him "our generations version of Elvis". Second on her list is Philip Schofield, followed by a boy at school called Kevin Robson, Kirstie Alley, "Then" Husband (as she refers to her first husband) and her "Now" Husband.....she then adds one extra man she loves. . .her dog.

I really love a quirky, witty, ironic sense of humour. When having her eyes tested just because her sister was and Sarah being the one that ended up having to wear the glasses. I loved the comment that she thought the optician must be rubbish because he had to wear glasses too! Her younger self comparing the bespectacled optician to a bald hairdresser. To be totally honest this funny observation had me thinking back to the various opticians I had been to and totally truthfully its only my present optician than doesn't wear glasses!
I also really identified with Sarah's mam as a hairdresser. As I explained above, my Auntie was a hairdresser and I went on to become a hairdresser so really identified with the whole customers with unrealistic expectations bringing in photographs from a magazine asking for hair like the picture. I loved how Sarah's mum's example was "they had four hairs and a picture of Elizabeth Taylor" and Sarah's mum would say, "It's a pair of scissors I have got not a wand!"

What made the book even better for me was that there were so many things I could identify with in this book. It made the book an even funnier read! As I was chuckling, giggling and in places proper belly laughing whilst reading the book my daughter kept asking me about the book. In fact she has started to read it now, and has been laughing herself. So the book certainly appeals to different age groups. I'd say this is an over 18's read, as it is a little crude and rude in places, having said that there are also a lot of tales you could read out to under 18 year olds too!

My immediate thoughts on finishing the book were, Amazing! Amusing! A laugh out must read book!