REVIEW - ACROSS THE SEA - THE DARTMOOR CHRONICLES BY JEN MINKMAN 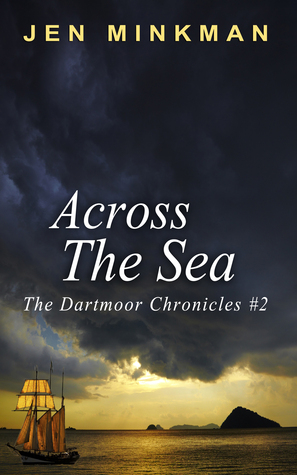 BLURB from Goodreads
Sarah and Kian have ended up on Tresco. They have brought Jinn home, but at a price - the president of Dartmoor is hot on their heels, and the only people who can help them live on the island of Lundy in the north, or in the notoriously rebellious community of Exmoor. When they team up with Walt and Leia, the Young Keepers of Lundy, as well as the leader of Exmoor,a makeshift army is put together to put an end to President Jacob's rule once and for all. The islanders and mainlanders will do everything in their power to make the New World into what it was truly supposed to be.

Will Kian be able to honor his uncle's legacy? And will Sarah keep her family safe and find out what happened to Jinn's twin brother? Find out in this final installment in the Island/Dartmoor series!

REVIEW
Having read the whole of the Island Series and the Dartmoor Chronicles book one I was looking forward to revisiting the characters and places in the series' as well as having some of my questions answered.


The cover shows the vastness of the sea and features what I would call an old fashioned ship prominently on the cover. The cover fits well with both the other Dartmoor Chronicle's title, Beyond the Fence and the covers for The Island Series.

President Jacob wants his Soldiers of Gideon to take fit and healthy people away from Tresco and perform experimental tests on them in a bid to find a cure for the disease his daughter has. It is time for the different settlements on the island to band together and make a stand.

So at the very end of Beyond The Fence, we discovered along with Sarah, Kian and Jinn that they had been fooled and followed by President Jacob's Soldiers of Gideon.
Sarah even ponders if the fact she met Jinn was engineered by the President too, as well as a boat being at the harbour to aid their escape.

Rob the keeper of Tresco orders that the people should leave the town and initially hide in some caves they have stocked with food, water and blankets for such an occasion as this invasion. How long can they successfully hide? What happens when the Soldiers of Gideon find the caves and those hidden in them? Or what will happen when the supplies in the cave run out?

It's quite ironic that the boys from the manor are going to be the first line of the Islands defence's when they were once the bullies and bad guys of the Island. It's decided that Sarah and Kian will go back to Lundy and ask for help to stop President Jacob kidnapping the Tresco Islanders and taking them against their will to be tested, and possibly meet the same fate of Jinn, ending up haing the disease itself and dying.

There were quite a few emotional scenes in the book, when Jinn is reunited with Gordon his father, there is elation at them finding each other again but tinged with sadness as Jinn's brother, also Gordon's son, Winda is still missing.
I also thought the talk that Kian and Jinn have before Kian and Sarah have to on a mission was quite emotional. Jinn knows he will most probably be dead before Sarah returns and he secretly and quietly asks Kian to look after Sarah, and though Jinn doesn't say the exact words he is giving Kian permission to go ahead and court Sarah in the future, though at the time, Kian takes the remark as look after her on the mission and help her cope when she comes home and I may have already passed on.

Whilst Kian and Sarah make their way to the harbour to wait for Captain Tom so they can go to Lundy for help, they have to take temporary cover in a part ruined building. Kian finds some cd roms, which later in the book he is prepared to barter for help to keep the Islanders safe, but will old computer items, storage devices be enough to barter help to fight off the invading army? Will King Locryn want these computer items enough to offer and follow through with the help the Islanders need? Even if King Locryn does agree to help will there be anyone left on the island to help defend their home or even anyone left alive on the island?

This book is told from the points of view of the central characters of Kian and Sarah. They are the main characters involved in gaining the help of powerful allies to take on President Jacob about his actions in testing people against their will, like Jinn.
My first thoughts upon finishing this book were, well that ties up all the loose ends from book one. Then I thought a little more and began thinking of things I still had questions about, like would Kian and Sarah ever get together? There's the surprise Sarah had whilst on the boat with Kian and Captain Tom to be taken into account too. I'd like to know more about that and how it affects both Sarah and Kian. Then there's still a little more that could be revealed about Gordon, Jinn's father.. . . .So I guess what I am saying is I would love maybe a novella set a bit further into the future, to kind of catch up with my favourite characters, Kian, Sarah, Walt, Leia, Saul, Cal and Mia are among the first that spring to mind.

Would I recommend this series? Of course yes! I'd recommend reading both The Island Series, and the Dartmoor Chronicles Series too. I've read quite a lot of books by this author, I love her writing style and pace.