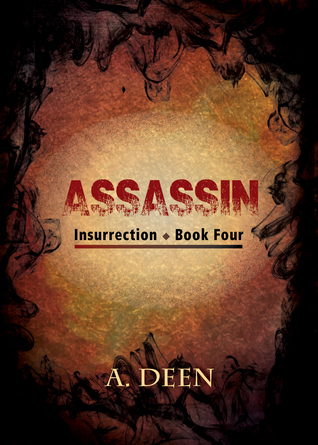 BLURB from Goodreads
Mankind has heard the voice of the Albatross speak against the Establishment for years. The resistance sees him as their leader, their symbol of freedom from oppression. No one knows he was once an assassin, a shadow of fear and torment wielded by the Establishment as a weapon of death. Until now. But there are secrets more horrifying than the Albatross’s past, deceptions interconnected with the Establishment and the alien enemy that humanity believes it defeated.When Everett awakens on an abandoned outpost in the asteroid belt, he is desperate to find Ellie and warn the resistance of the Locusts’ impending return. Neither may be possible, especially when Everett faces an old adversary who knows he’s hiding more than just a savage past. But when intruders enter the outpost, they’ll have to work together to escape with their lives or lose everything they’ve fought for.

INITIAL THOUGHTSAs this is the fourth book in this intriguing series I was looking forward to reading it. I really wanted to know what had happened to Ellie, one of my favourite characters in this series.THOUGHTS WHILST READINGStill loving the characters, thinking the Albatross aka Everett will make gret book boyfriend material. Then again so would Gemson!COVER THOUGHTS/COMMENTSThis cover perfectly matches all the others, with just the different novella/episode changed.REVIEWThis book starts with Everett aka the Albatross hearing his name being called out in the distance. At first the voice calling seems far away to him but as he regains full consciousness it becomes closer. Then the pain hits along with the memories of what happened with the Butcher. Once totally aware, Everett can feel an IV in his arm. Not being one to lay and wait for answers to come to him he sets about finding out what, where and who he is with. As he discovers he is in some sort of large hangar type building, his memories all come rushing back and he is filled with terror as he recalls what the butcher told him he would do to his beloved Ellie. Everett is filled with a sudden urgency but is equally torn. His head demands that he needs to warn the resistance of the locusts attack plans, where as his heart is urging him on to find Ellie!The torture he underwent in the last book (no spoilers!) is still affecting him very badly, it’s a struggle to think and even harder to get his body to obey his instructions to move. So when Gemson arrives in the hangar directing a barrage of questions at Everett, he decides he needs to co-operate. The first question Gemson barks is to demand to know “What he is?” a difficult question but Everett replies honestly that yes he is human but a human changed. Again I can’t reveal much more of their conversation as it would reveal spoilers. Gemson then leads Everett to believe that Ellie has been mortally wounded. This novella covers a lot, there’s the brotherly protectiveness of Gemson, the hurry to contact the resistance. . .that’s if the resistance will even believe him now they know the full truth of his past as an assassin. . .can he make the new leaders of the resistance believe him?Asassins are sent to kill Everett, his former “brothers” M-Six, L-Nine and Eight-Zero. It doesn’t matter that the human in them agree the Everett (formerly One-Seven-Five) though they fight their implants as much as possible there are some great fight scenes within the book. Also though not totally human there are some brilliant emotional scenes between the Assassins, their resignation at what has to happen. One of the assassin reveals a vital piece of information to Everett which make him meeting up and getting the resistance to believe him vital if earth is ever to fight and win against the alien locust intruders.We get to meet Yaren in this novella too, whom Gemson refers to as a cyborg. His attitude is to look down on Yaren as non human and some sort of freak. His mind set soon changes as they all have to fight together against the establishment to escape to a hidden place to meet up with General Ortega.I loved the dialogue, and verbal sparring between Yaren and Gemson. Yaren is prepared to sacrifice everything to fly her passengers to safety and to take them to meet General Ortega.Everett also finally has some time alone to talk to someone he really cares for. He is concerned at what she will say about hi idea to bring down the locusts. It’s pretty sad really as they have quite literally only just found each other. Though they are both determined to make the very most of what little guaranteed time together on their journey to the rendezvous with General Ortega.FINAL THOUGHTSSo to sum up here are just a few of the questions I have for the next novella.I am eager to find out if General Ortega will believe and welcome Everett back into the resistance. Will the resistance get organised quickly enough to fight the locusts? Can the resistance win? What will he think to Everett’s idea to fight the locusts, what could well end up being a suicide mission. I found this novella Another engrossing episode! Certainly leaves you wanting more!