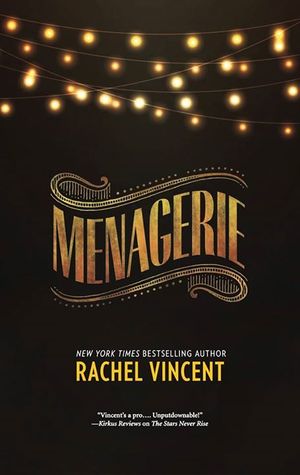 BLURB from Goodreads
When Delilah Marlow visits a famous traveling carnival, Metzger's Menagerie, she is an ordinary woman in a not-quite-ordinary world. But under the macabre circus black-top, she discovers a fierce, sharp-clawed creature lurking just beneath her human veneer. Captured and put on exhibition, Delilah in her black swan burlesque costume is stripped of her worldly possessions, including her own name, as she's forced to "perform" in town after town. But there is breathtaking beauty behind the seamy and grotesque reality of the carnival. Gallagher, her handler, is as kind as he is cryptic and strong. The other "attractions"—mermaids, minotaurs, gryphons and kelpies—are strange, yes, but they share a bond forged by the brutal realities of captivity. And as Delilah struggles for her freedom, and for her fellow menagerie, she'll discover a strength and a purpose she never knew existed.

INITIAL THOUGHTS
As I loved Rachel Vincent's Shifter Series so much I always take a look a closer look at any book by her. I have also always been fascinated with circus and the history and origins of circus's too, so that was another thing that appealed to me about this book. So with the high expectations I have of anything written by this author as well as the being interested in the Circus I was really looking forward to reading this one.

FINAL THOUGHTS
Oooo what an ending! I want to know more. . . What will happen to Metzgers Menagerie and it's cryptids. I loved how this book drew you in and showed both perspectives: why people were frightened of the cryptids and also how badly treated the cryptids are.....