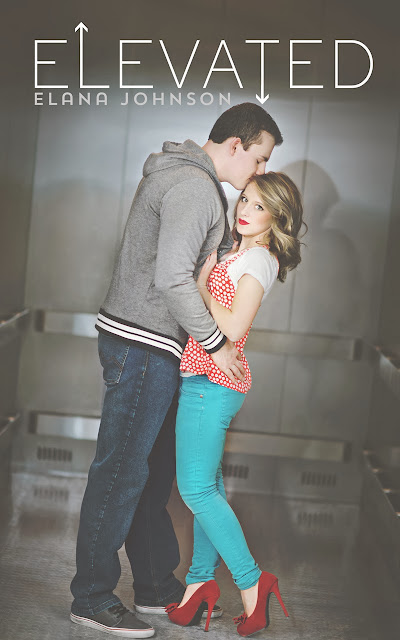 BLURB supplied by Elana Johnson
The last person seventeen-year-old Eleanor Livingston wants to see on the elevator—let alone get stuck with—is her ex-boyfriend Travis, the guy she's been avoiding for five months.

Plagued with the belief that when she speaks the truth, bad things happen, Elly hasn’t told Trav anything. Not why she broke up with him and cut off all contact. Not what happened the day her father returned from his deployment to Afghanistan. And certainly not that she misses him and still thinks about him everyday.

But with nowhere to hide and Travis so close it hurts, Elly’s worried she won’t be able to contain her secrets for long. She’s terrified of finally revealing the truth, because she can’t bear to watch a tragedy befall the boy she still loves.

INITIAL THOUGHTS
I have Elana Johnsons other book series in my TBR Pile yet as yet haven't had the time to devote to reading them yet so when this standalone book came along I jumped at the chance of reading a book by Elana. I also fancied a somewhat lighter non paranormal read, and this one sounded like it would fit the bill.
I admit to thinking I maybe wasn't going to like book from the blurb. I actually thought that the fact the book is about being stuck in an elevator would make it quite restrictive as to what could happen. In fact the book story-line is told from the point of view of Elly whilst she is stuck in the lift.

MY REVIEW
I received an e-arc copy of this book directly from the Author Elana Johnson, who also organises great blog tours for other Authors in exchange for my honest review.
The cover is of two teens embracing in an elevator, which is where the story is told from by the main female character Elly. I don't think the female on the cover fits my image of Elly from reading the book, she fits more what I'd say Id think Honesty would look like.
Would the cover make me pick up the book from a bookstore shelf? The cover isn't super eye catching but it fits the genre well and I think I would check it out further and read the blurb so I'd say the cover works.
So as I've mentioned the story is told by Eleanor Livingston, nicknamed Elly, when she gets stuck in the elevator in her apartment building with the last guy on earth she wants to be trapped with . . her ex- boyfriend Travis (Trav to his friends). Elly tells us the story of how the couple went from friends to boyfriend and girlfriend and then how they broke up to a point that they don't even speak to each other. Elly also tells the reader about Honesty, her best female friend . . .until she found out Elly and Trav were a couple and ran out into the awful weather conditions of the day and was run over by a van that slipped on some ice.
You see Honesty was upset about Trav & Elly as she originally dated Trav. Trav took Elly to the Prom and asked his cousin Jesse to take Elly, when really Trav should have just asked Elly to the Prom. He realised a little too late that he had invited the wrong girl. Trav and Jesse live in the same apartment building with Trav's mum as Elly lives in with her mum and siblings. Trav's mum goes missing for days and is never there to cook for the boys, so Elly goes up and cooks for them and is a good friend to them both, kind of a shoulder to lean on. that's how it all begins.
Sadly round about the time Honesty discovers Trav & Elly are in a relationship Elly discovers she is pregnant. Elly finds it difficult to speak to her mum but breaks down in tears and tells her dad during a Skype call as he is away in the forces. Elly has a strange way of coping with things, she cannot just make a decision, she has to say Eenie Meeni ...etc.
Elly never tells anyone about the pregnancy except her dad. . . then two weeks after telling him he has an accident so Elly believe it is some sort of "punishment" for her getting pregnant. Elly seems to think if she ignores being pregnant then she isn't pregnant. Then another bad thing happens when Honesty is knocked down by a van and dies. Elly attends the funeral of Honesty even though they had argued just prior to Honesty's death. Elly feels responsible . . . everything bad that happens is somehow because of her. . . what is she going to do about the pregnancy how can she tell Travis? How can she tell her mum? When will people start noticing?
So did I enjoy the book? Yes, I read it in just two sessions, I didn't want to put the book down.  Would I recommend the book? Yes, it's a good "teen life story". though I think it will appeal to a fairly wide age range. Would I read other books by Elana Johnson? As I said further up in this review I do have her Possession Series ready and waiting on my kindle.
Posted by Jeanz xx at 03:00