PARADOX THE ANGELS ARE HERE BY PATTI ROBERTS 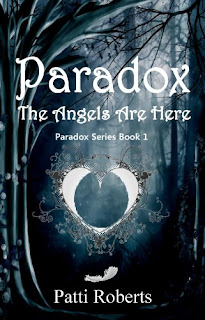 Paradox The Angels Are Here by Patti Roberts is set in two time dimensions, one is based nine hundred years ago when a Grigorian army attacked the Bulguardian Royal palace. A battles rages and almost destroys the Royal City of Altair. The second dimension is set as "today" and is about a young girl called Grace whose world is turned upside down by loss and grief by a visit from the angel of Death.

I enjoyed the whole notion of Grace having a kind of past life in the first dimension and getting flashbacks to her previous lives , losses, and troubles. The whole concept of there being a higher force that creates the tsunamis, earthquakes and so called "natural" disasters was also intriguing. The book is well written though the copy i read did contain a few typing errors but they in no way detracted from the book and the enjoyment of it. I actually sat and read the whole book in one sitting I just didnt want to put it down and am looking forward to book 2 Paradox; progeny of Innocence.
This book is available on Amazon.co.uk and last time I checked was at the bargain price of £0.71. A must read!
Posted by Jeanz xx at 13:00